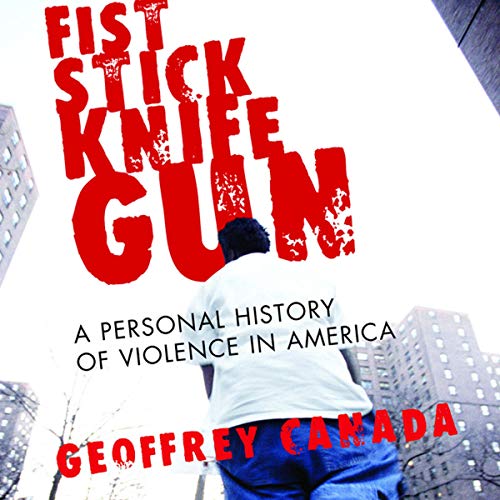 By: Geoffery Canada
Narrated by: Bill Quinn
Try for $0.00

Long before the avalanche of praise for his work - from Oprah Winfrey, from President Bill Clinton, from President Barack Obama - long before he became known for his talk show appearances, Members Project spots, and documentaries like Waiting for "Superman", Geoffrey Canada was a small boy growing up scared on the mean streets of the South Bronx. His childhood world was one where "sidewalk boys" learned the codes of the block and were ranked through the rituals of fist, stick, and knife. Then the streets changed, and the stakes got even higher. In his candid and riveting memoir, Canada relives a childhood in which violence stalked every street corner.

A Personal History, Not a Researched Book

After hearing a personal recommendation from Steven Levitt of Freakonomics fame, I jumped to download this book. Knowing Levitt to be a levelheaded, logical, and pragmatic economist with a tremendous ability to assess cause and effect, I figured that this book would cover the basics of how and why violence blossomed in America. This came on the heels of my most recent reading of Pinker's "Better Angels of Our Nature", and exhausting but tremendously informative tome that covers the history, motivations, and science of violence in the human race.

As a result, I found "Fist, Stick, Knife, Gun" to be...not what I expected, but still an interesting listen. As the title implies, the books outlines author Canada's personal experience growing up in rough neighborhoods, and his personal choices to fix that. Canada tells an amazing story about how rough life in the big city can be, and compares it to the new threats that youth faces in the forgotten ghettos today. He also describes how he dove head-first into these rough areas to tackle the problem, and how his methods brought a surprising degree of success.

I was taken aback by the Canada's assertion that certain types of violence, applied strategically, can cause more serious violence to be mitigated, but his point is believable in light of his personal experience in this area.

Growing up Under the Shadow of Violence

Fist Stick Knife Gun is a game-changer, and brought Geoffrey Canada to national attention. He's been praised by Oprah Winfrey, President Clinton, and President Obama for his work as a social activist and educator.

Canada grew up in the South Bronx where "sidewalk boys" learned the codes of the block and were ranked through rituals of fist, stick, and knife. Violence was just a normal part of life— in one episode, Canada describes walking down the street, and you can see through his eyes just how dangerous it was!

The desolation is releived by Canada's optimism that this violence can be changed. He is the CEO of the Harlem Children's Zone in Harlem, New York, on the boards of several organizations to help children in poverty and a social activist. Canada offers solid, practical solutions— not the kind of rhetoric we're so weary of hearing.

Incredible read for those of us who, like Canada, are moved to serve our communities, our children, our nation. Recognizing that the solution to peace is investing in our children and our communities -- long absent from the dialogue and rhetoric of the nation and its politics currently-- this book will help you refocus your heart and mind on the war our nation has internally.
We are murdering our youth by allowing them to murder one another while others still fight for survival right next door.
Deep. Powerful. Identifiable.

I really liked the details he had in his stofy . I also loved how he went in order on how the things happened to him

must read. It will forever change your thinking!

I highly recommend everyone to read this book! your perspective on violence will change. after reading the book , it will want you to go and help the struggling, violent communities around you.

What did you love best about Fist Stick Knife Gun?

The story about the hierarchy of the street violence, very interesting.

When the kids had to deal with an adult on the street that did not know the rules, and they began to act like predators.

definitely worth the read. a very smart book and interesting take on the roots of violence and how it's changed over the years. something to think about.

What made the experience of listening to Fist Stick Knife Gun the most enjoyable?

While the narrator did a commendable job, Geoffrey Canada has such a wonderful voice - I wish he would have read his own work.