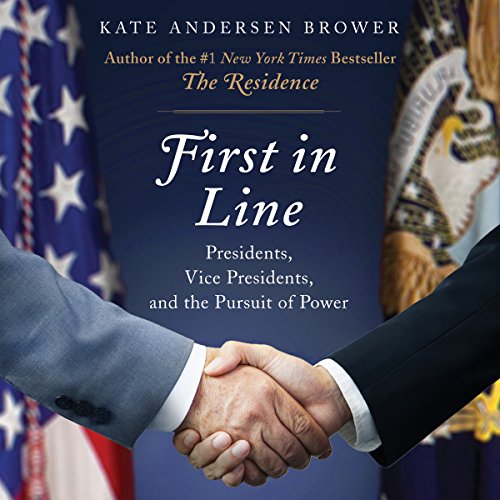 By: Kate Andersen Brower
Narrated by: Fred Sanders
Try for $0.00

From the author of the New York Times best sellers First Women and The Residence, an intimate, news-making look at the men who are next in line to the most powerful office in the world - the vice presidents of the modern era - from Richard Nixon to Joe Biden to Mike Pence.

Vice presidents occupy a unique and important position, living partway in the spotlight and part in the wings. Of the 47 vice presidents who have served the United States, 14 have become president; eight of these have risen to the Oval Office because of a president’s death or assassination, and one became president after his boss’s resignation. John Nance Garner, FDR’s first vice president, famously said the vice presidency is "not worth a bucket of warm piss" (later cleaned up to "warm spit"). But things have changed dramatically in recent years. In interviews with more than 200 people, including former vice presidents, their family members, and insiders and confidants of every president since Jimmy Carter, Kate Andersen Brower pulls back the curtain and reveals the sometimes cold, sometimes close, and always complicated relationship between our modern presidents and their vice presidents.

Brower took us inside the lives of the White House staff and gave us an intimate look at the modern First Ladies; now, in her signature style, she introduces us to the second-most powerful men in the world, exploring the lives and roles of 13 modern vice presidents - eight Republicans and five Democrats. And she shares surprising revelations about the relationship between former Vice President Joe Biden and former President Barack Obama and how Vice President Mike Pence and President Donald Trump interact behind closed doors.

From rivals to coworkers, there is a very tangible sense of admiration mixed with jealousy and resentment in nearly all these relationships between the number two and his boss, even the best ones, Brower reveals. Vice presidents owe their position to the president, a connection that affects not only how they are perceived but also their possible future as a presidential candidate - which is tied, for better or worse, to the president they serve.

This rich dynamic between the president and the vice president has never been fully explored or understood. Compelling and deeply reported, grounded in history and politics, and full of previously untold and incredibly personal stories, First in Line pierces the veil of secrecy enveloping this historic political office to offer us a candid portrait of what it’s truly like to be a heartbeat away.

What listeners say about First in Line

Brower provided a brief biography of the vice presidents since Truman to the most current one. I found the information about Dan Quayle and Mike Pence interesting and new to me; all the others I was quite familiar with. The book starts off strong but becomes gossipy in the last half. The author might have done better shorting the book and making it more concise. Over all, I enjoyed the book and did pick up some new information about vice presidents. The author has triggered me to want to read some biographies about some of the vice presidents.

The book is almost eleven hours. Fred Sanders does a good job narrating the book. Sanders is an actor, voice-over artist and audiobook narrator.

I really enjoyed this book, but you need a pretty good grip on the players and time lines of modern history to follow it. It is organized categorically, so the jumps can be a tad jarring, hopping from Vietnam era to modern day then to Eisenhower’s Illnesses at a moments notice. That being said I really enjoyed the book. I liked that it didn’t seem to be preferential to one party or one era, and explained both sides and motivations of an story when possible.

I enjoyed a lot of it, but the digs at Trump got old. Most Presidents were treated with respect which I appreciate, but Trump was not. No matter where you stand on him, you should respect the Office.

I love history, non-fiction and biographical books...this book hit all 3. It was awesome to read about our U.S. presidents and vice presidents' lives and inside info.

There are hundreds if not thousands of books that look at the office of the President of the United States. I don't recall there being a similar book which explores the vice-presidency in such detail as does "First in Line."

The author made a wise choice when deciding to profile the vice- presidents of the past 75 years or so. Rather than just a dry compendium of facts about every vice-president who ever served, the writer keeps the group large enough to demonstrate diversity in how the officeholders are chosen and utilized. At the same time the writer keeps the list small enough so that she can delve deeply enough into their lives to bring them to life. She also ensures that the people she writes about are recognizable to the majority of readers.

I highly recommend this book to history and political buffs, as well as anyone with a more than passing interest in government. You won't be disappointed.

I really didn't think this book would be very informative, but it definitely was and kept me interested the whole time.
Really liked it.

this is a really interesting insight into a position which is little thought of or really understood. the most interesting thing is how the position is reshaped each time a new administration takes over

most don't make the Oval Office.

A great listen and you will understand more US history for taking the time, thanks.

I’m fascinated by the stories

This is a book that should have been written long before. With so many recent Vice Presidents rising to president, someone should have looked at the experience. I’m so glad this author did. I have read biographies of many of these individuals. I still learned things I had not know. Exceptional.

The text seemed to bounce around a lot and repeat itself but was still very enjoyable.