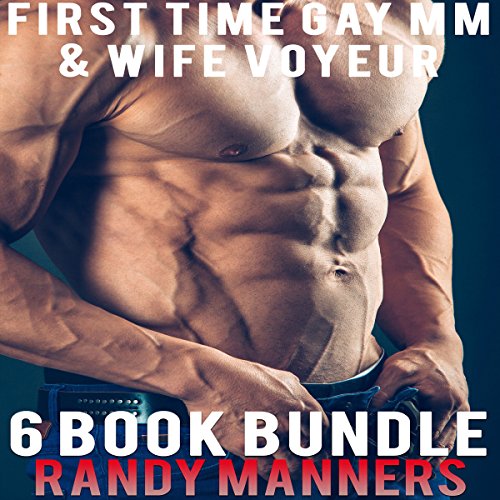 By: Randy Manners
Narrated by: Marcus M. Wilde
Try for $0.00

When Tad and Daine are sent on a week-long business conference, they assumed they'd be staying in separate rooms. Their penny-pinching boss had different plans. Now, one King Sized bed is all that separates the two. Tad, the newest member of the team, wanted to test the waters at his boys-club work place before he came out. Being shoved into a room with the hunkiest partner in the firm wasn't part of the plan. Completely unaware of the effect he's having, Daine strips down and hops in the shower. Hot steam isn't the only thing heating up the room. Will Daine turn down a new business venture or will Tad give him an offer he can't refuse?

Graduation is tomorrow, and Alex will take his vows of priesthood Monday morning.

His friend takes him out for one last wild night on the town. Problem is, Alex has never been into the octane lifestyle of dance clubs and fast women. He's never been that into women at all. It's exactly why he's a good fit for the priesthood, right? And then Hank showed up. He was every bit the man his old-school name warranted. And he understood. This wasn't his kind of place, either. Hank takes the reins and leads Alex down a new path. Which calling will Alex follow?

When Scott's flagrant foul loses his team the big game, he knows he has a lot to make up for. He's used to hitting it fast and hard on the field, but is he ready for Coach's brand of down and dirty discipline in the locker room? Scott is sure his hot and hunky coach will have some hard and rough words for him when he gets called into his office. Scott is ready and eager to please his coach. Can he make up for his error, or will Coach show Scott just how hard it is to play for his team?

I didn't know what I was getting myself into.

My wife liked it when guys came onto me. I'd never thought much about it. Whenever she turned some guys head, sure, I wanted to punch him in the face - but another part of me was all "Hell yeah, that's mine". So, when she asked me to go commando to her work party, I thought was just a kinky little thing between us. Then I met her boss. The guy was the full package, and the two seemed like they shared a secret. Not that I was jealous - why should I be? The guy was gay. Renee whispered into my ear that she wanted to try something new. I'd assumed that's why she had lured me into a dark bedroom - getting naughty on her boss's bed. That's not what she had in mind. Not for her, at least. The door opened and there he stood. No, my wife wanted to watch.

Pounded for Her Pleasure

I could never have imagined what desires lie beneath.

He was an old friend of my wife's from college. He was in town for just a few days. A lavish night out for my wife and me turned into a mini-reunion. I hadn't realized our date night was engineered to throw us together - not until he made his move. I was taken off guard by my body's reaction - and by my wife. She had wanted this to happen all along. She had wanted to see my body intertwined with his. She'd wanted to watch as I was taken. And, God help me, I wanted it too.

Drilled for Her Pleasure

He never could have imagined it would turn her on.

One liquor-laden night, and he'd told his wife everything. And now she wanted to watch. She seated herself in a corner of the bar as he sat down next to a sexy man in a Navy uniform. He didn't know where to start, but he didn't need to. Master Chief took control. The chief is hot and ready to teach a first-timer a few lessons - and he is more than happy to let dear wifey in on the action!

These stories are well written and incredibly sexy, particularly the last three where the introduction is happening with the active encouragement and in front of the man's wife! There is no humiliation or force in these stories. All the action is happening to willing and enthusiastic (albeit sometimes after some initial reluctance) participants. By the end of each story, everyone is happy with a job well done, and there is one guy that is pleased about a brand new experience.

As of this writing, when you borrow the book using Kindle Unlimited, you can purchase the Audible book for $1.99, which is a great bargain for a book that almost 3 hours long. The narration by Marcus M. Wilde is well done and appropriate. I think that this collection can be enjoyed by the curious, the open minded and just about any listener.