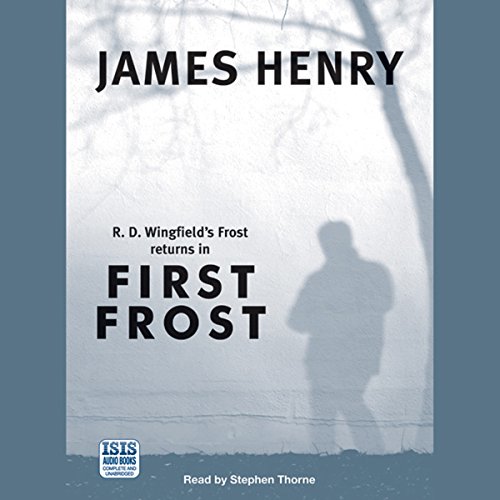 By: James Henry
Narrated by: Stephen Thorne
Try for $0.00

Denton, 1981. Britain is in recession, the IRA is becoming increasingly active, and the country’s on alert for an outbreak of rabies. Detective Sergeant Jack Frost is working under his mentor, DI Bert Williams, and coping badly with his increasingly strained marriage.

Superintendent Stanley Mullett has been at Denton for only six months and is desperately trying to restore order within the chronically depleted ranks while refurbishing the dilapidated Eagle Lane HQ. But DI Williams is nowhere to be seen, and DI Allen has failed to return from his walking holiday. So when a 12-year-old girl goes missing from a department-store changing room, Mullett has no option but to put DS Frost in charge of the investigation.

What listeners say about First Frost

Made me laugh out loud!

I'd forgotten just how different things were in the 70's and 80's - this was an entertaining reminder. A touch predictable but thoroughly entertaining. Just try not to think of David Jason while you listen to it and you'll get on fine,

A very good start to the new Frost by the author "James Henry".
I could picture David Jason portraying the grumpy police sergeant and the characters were very good and believable.Wrapped up in a story of murder and mayhem.
However I am no way a prude but there is no need for the profanities that appear late in the book,they seem to jar,just not needed or wanted.
But I will definately download his 2nd book and look forward to hearing more new stories of Frost.
Definitely recommend.

Very cleverly the author copied the style of R.D. Wingfield to create a prequel to the highly enjoyable Frost series. It has the same pace and humour. Stephen Thorne is one of my favorite narrators and his delivery of this book and the regular Frost series (except for two books, which is a shame) is spot on! Bring on the next installment, with Stephen as the narrator!

As with all Frost novels, there is little left out, great listening.
Looking forward to more like it.

wasn't sure but pleasantly surprised!

So I'm a huge fan of the original frost books and wasn't sure how anyone could carry it on in a way I would enjoy but I have to say I really enjoyed this book!
It had some genuinely funny moments along with Frosts signature disrespect for anyone in authority. I quite liked Mullet's character in this one too, he's not quite such an A hole and actually sticks up for his men.
My only criticism is I'm not sure we needed to hear about how fat Hanlon was all the time! I Wish it had been longer too! will be buying more of these.

Couldn't listen any further. Tired of plots based round dirty old men. Great narrator though.

Captured the TV series character with a touch of the 80s. still can't quite picture a younger Frost but it was a great story.

How lovely to have more Frost books. I enjoyed this book very much, it is well read, interesting and as good as the original books.

My first Frost listen. I am sure that I will be back for more. Excellent narrator. Switching between kindle and Audible was seamless and impressed with this first attempt.