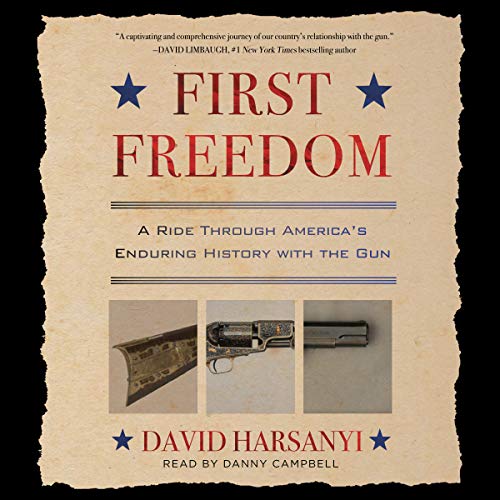 By: David Harsanyi
Narrated by: Danny Campbell
Try for $0.00

From “one of America’s smartest political writers” (Glenn Beck) comes a fascinating and accessible history of the United States’ unique and enduring relationship with guns, for fans of Chris Kyle’s American Gun.

For America, the gun is a story of innovation, power, violence, character, and freedom.

From the founding of the nation to the pioneering of the West, from the freeing of the slaves to the urbanization of the 20th century, our country has had a complex and lasting relationship with firearms. Now, in First Freedom, nationally syndicated columnist and veteran writer David Harsanyi explores the ways in which firearms have helped preserve our religious, economic, and cultural institutions for more than two centuries. From Samuel Colt’s early entrepreneurism to the successful firearms technology that helped make the US a superpower, the gun is inextricably tied to our exceptional rise.

In the vein of popular histories like Salt and Seabiscuit, Harsanyi takes you on a captivating and thrilling ride of Second Amendment history that demonstrates why guns are not only an integral part of America’s past, but also an essential part of its future.

What listeners say about First Freedom

This book makes for a wonderful crash course in American history, the Second Amendment, what the Right to Bear Arms has meant for American citizens, and how our culture has understood (and misunderstood) that Right. The overviews of the lives of people like Sam Colt, Annie Oakley, John Moses Browning, Maxim, Garand, Ruger, and Stoner provide a fascinating insight into the nature of American capitalism, liberty, the Frontier Spirit of Rugged Individualism, and how guns and gun ownership shaped the nation.
The chapter dealing with the Heller and McDonald rulings is especially good, showing how our legal understanding of one of our most important rights got grounded on solid footing once again, starting with the Late Great Justice Scalia's analysis.
I'm actually surprised the author didn't dive into events like the Battle of Athens, Tennessee. The "Battle" happened when a group of World War II veterans returned home to their town in 1946 and took up arms to overthrow a corrupt local government which had been rigging elections. (If you have a moment, Google it! It's one of many true stories of the Second Amendment in action.)
In a time and place when there is so much disinformation and nastiness in our debate about guns, gun culture, and the meaning of the Second Amendment, a book like this is a welcome dose of intelligent and insightful commentary.
The choice of narrator could have been better, however. I don't think Danny Campbell's reading was godawful, but it sounded rather hoarse and under-powered, and there were moments when he sounded like he was coming down with bronchitis. Most of the time, my attention was held just by the fascinating subject matter, but a few times the raspy narration was just distracting.
All the same, I definitely recommend this book. If you're even the least bit curious about guns, the Second Amendment, and some American history you never learned in high school, check this one out!

A well-rounded history of the gun from the founding of the United States to the present.

A wealth of information about guns throughout history to the current day which includes the the science, politics and human perspective. A great read.

the history of guns though time and mostly America. Very good read. Check it out.

History of the 2nd Amendment

Great look at the 2nd Amendment and guns in America. I will be getting a paper copy for my library it was that good.

Well done and not only informative but also entertaining. If you are interested in small arms this book has it all.

this is a great history of the gun and how it has shaped american attitudes and built the country into what it is today.

While not a story, this is a historical timeline of firearms shaping the United States. If you’re into learning history this is a gem. The first part of the book was slower than the second half as far as the content on firearms. I feel like there was more explanation of the firearms used and backstory for context.

Great history of firearms in America

This book really gave a great history of firearms from early match lock up to modern firearms. I will be re-listening to this book again.

Great book but I found the reader’s voice off- putting. He Sounded hoarse and rough.