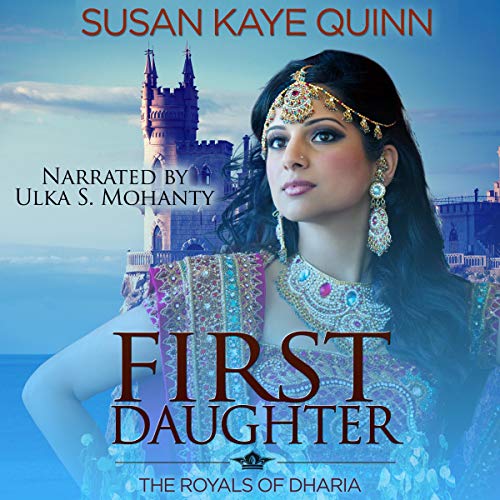 This is the third book in the Royals of Dharia trilogy.

The war has begun, and with the Queen of Dharia on her deathbed, Aniri’s excessively-proper eldest sister, First Daughter Nahali, finally sees her chance to claim the crown. Aniri and Nahali have never seen eye-to-eye, not since they were girls running through the palace courtyard, but with Prince Malik and Second Daughter Seledri kidnapped, Aniri can’t afford to fight with her sister.

So she follows the First Daughter’s orders and prepares for a war she fears will destroy everything she loves. Her sister has spent her entire life preparing for this job - Aniri prays to the gods Nahali knows what she’s doing.

But when the Queen calls the two Daughters to her bedside, she sends Nahali off to prepare for war...and tasks Aniri with a secret mission. She must go after the power-mad prince of Samir and stop his deadly skyship. It may cost Aniri everything, including a chance to ever return home, but she defies the First Daughter’s orders and embarks on a desperate mission to save the people she loves from a war that will tear all three Queendoms apart.

First Daughter is the final book in the Royals of Dharia trilogy. It is told from Aniri’s point of view.

What listeners say about First Daughter

Will definitely re-read in the future

I'm so glad I bought this series, because I will definitely re-read it in the future, that's how much I enjoyed it! This book introduced the beginning of a war, which also gave us a new and exciting element to the story. This trilogy is definitely worth it, with each book expanding, but never feeling rushed or boring. I also love that this is a princess book, but she's so unlike any other characters or stories we've read. She's absolutely captivating, and the other characters surrounding her are lovable and unique. *I was given this book in exchange for an honest review.

My third read from author Susan Kaye Quinn. A rollicking steam-punk adventure set in exotic India. Don't let the title throw you, even though it says First Daughter the main character is the same as from the first two books. Well-written with well-developed main characters, an enjoyable read, even better than the first books in the series. I was given an Audible copy of this book & I'm voluntarily reviewing it! (RIP Marley January 20, 2014 - July 24, 2018)

great story and a great series absolutely loved it wish there were more like it.
narrator is great and he should follow.
the series is enjoyable and acceptable for people of all ages