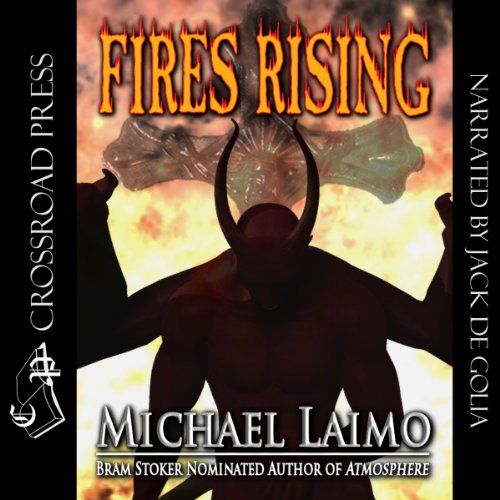 By: Michael Laimo
Narrated by: Jack de Golia
Try for $0.00

While building a church in New York at the turn of the century, a crate arrives and upon breaking turns the parishoners into murderous lunatics. Flash forward to present day, and this same church now facing destruction has become home to a number of homeless. Whatever evil that was in the crate has been unleashed, and it's up to the homeless residents and the former priest of the church to stop the evil from consuming New York in the form of angry sweaty construction workers. Yes that's right…the world ends not with a bang, but with a yellow hard hat, stained wife-beater, power tools, and just a hint of butt-crack showing.

What listeners say about Fires Rising

This was a pretty good horror book.It lost ground somewhere.I believe it had too many main characters.I did like it though. Jack de Golla was a fine narrator. I was given this book by the narrator,author or publisher free for an honest review.

Would you try another book from Michael Laimo and/or Jack de Golia?

Even though I had a lukewarm response to this horror novel, I'm certainly going to read more of Michael Laimo's work, and definitely listen to more of Jack de Golia's narration. Both are talented guys, but this book just wound up feeling average to me.

The most interesting aspect was the depictions of the homeless as something more organic and sincere than the usual pseudo-schizophrenia, crazy man with a heart of gold you might find in other movies and novels. On the other end of the spectrum, I just didn't find a lot to get invested in as far as the villains were concerned. An ancient evil is fine, as are possessed minions, but I didn't really gain any real appreciation for the history and motivation of the evil force at work.

Which character – as performed by Jack de Golia – was your favorite?

Jyro. Pretty much all of the indigent characters came off as quite likable, or at least relatable, which is more than could be said for the lead protagonist, Father Pilazzo. Jyro in particular felt more genuine and more three-dimensional than the supposed hero, and it helped with Jack's portrayal.

Could you see Fires Rising being made into a movie or a TV series? Who should the stars be?

Between the two, I'd say movie, although I'm not sure who I would cast in any of the roles. Harvey Keitel is hard to beat no matter what he does, so maybe cast him as Father Pilazzo. As for Jyro, change it up a bit and cast Don Cheadle, since he can play just about anyone.

At the risk of condemning the book with faint praise, I found the novel just engaging enough to hold my attention through to the end, but it's not a book I would place high on any recommendation list, and would reserve for those who are ravenous for any and all supernatural horror novels of competent quality.

not worth the listen

Didn't quite grab my attention

It might be that it's not the usual genre that I listen too but this book didn't hold my attention very well. It might have been the religious nature of the book though I am a religious person, not Catholic, but still religious. Over all I think the story was good but It's not really my kind of story.