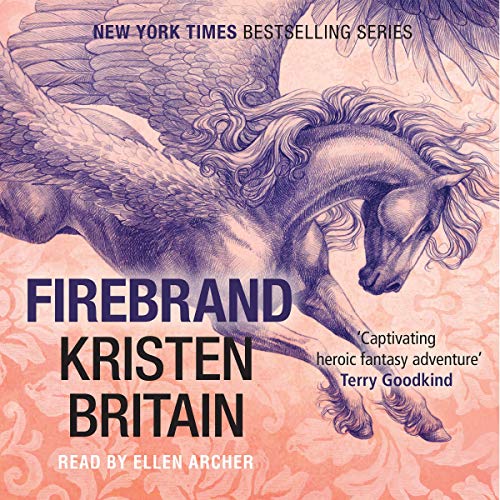 By: Kristen Britain
Narrated by: Ellen Archer
Try for $0.00

Green Rider Karigan G'ladheon, not yet recovered in heart or mind from her unexpected trip through time, is assigned a new mission. She must seek out the legendary creatures called p'ehdrosian to renew an alliance of old in the face of dire threats from enemies who seek to destroy Sacoridia using dark magic.

Each step on her journey northward grows more perilous as she faces attacks from groundmites, encounters with ghosts and ultimately, the threat of the necromancer and leader of Second Empire, Grandmother, as they approach the enemy encampment in the Lone Forest.

Meanwhile, King Zachary of Sacoridia has been kidnapped by an ice elemental who is allied with Second Empire. Can Karigan free her King from captivity with just two allies by her side?

What listeners say about Firebrand

I discovered the green Rider series many years ago, and I’ve been an avid fan ever since. These stories, to me should be held up there as one of the many greats when it comes to fantasy series. The imagination of Kristin Britain is absolutely astounding to me. I am in awe of her ability to spin these elaborate tales, book after book. When I read the stories I am immersed in their worlds, and having to wait for the next book is agony.

This is 5 star story and a 5 star performance from Ellen Archer as always, this is possibly one of my favourites in the series, but some of the chapters are missing content, if you have never read the book you may not notice but when the chapter cuts off mid sentence it’s hard not to, it’s a shame as I was so pleased when the full series finally came to audible.

unfortunately, this copy of the audio book has several chapters that are missing endings.

I really love this series and the audio books are fab. One chapter is missing half of the story but don’t think you would notice unless you had read the books

As other reviewers have noted, the audio just cuts out abruptly at the end of several chapters and sections of the story are left incomplete. Ok if you have access to the text to fill in the gaps. Audible needs to fix their edition.

Such a pity because the performance is excellent.

Good but missing some audio

This book is good and I own it in different formats. However, the audio available through Audible is missing some of the story at the ends of a couple of chapters. If this is fixed, then my rating would be 5 stars for everything.