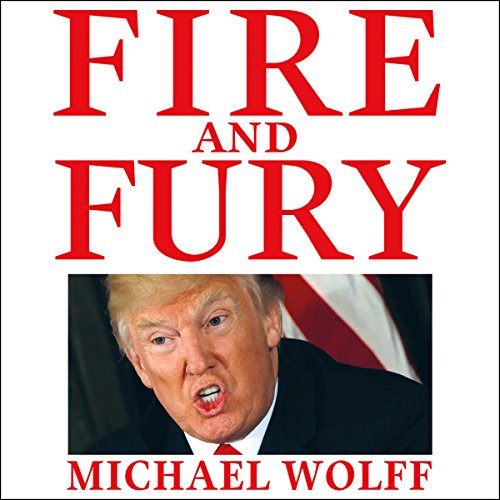 The first nine months of Donald Trump's term were stormy, outrageous - and absolutely mesmerising. Now, thanks to his deep access to the West Wing, best-selling author Michael Wolff tells the riveting story of how Trump launched a tenure as volatile and fiery as the man himself.

In this explosive audiobook, Wolff provides a wealth of new details about the chaos in the Oval Office. Among the revelations:

Never before has a presidency so divided the American people. Brilliantly reported and astoundingly fresh, Michael Wolff's Fire and Fury shows us how and why Donald Trump has become the king of discord and disunion.

What listeners say about Fire and Fury

Couldn’t stop until finished. Great audio. Can’t beat this shit for sure. Highly recommended. It’s really an amazing account of the Trumpworld.

Lordy I hope most of this is true

I’ve never read a book so quickly nor eagerly. This really confirms what most of us have suspected

This book was really just a rehash of stories that anyone could have known had they followed the news closely. There wasn't any new discoveries, analysis or revelations. This is not an investigative expose, it reads more like gossip than political analysis or investigative journalism. The narration was irritating.

True? Who knows. Entertaining? Most definitely!!

Fascinating tale of how the Trump administration works. Veracity can be at times a little bent, but in general, we get a sense that all of what is described happened in one way or another.

Enjoyed it although it made me cross

It really made me cross that this idiot is the most powerful man in the world. He is wrecking the USA and doesn't deserve this job. This shows how unglued he really is

interesting because he was around so much of the goings on. Great read highly recommend

the emperor has no clothes

High-minded people may say we do not need to know about the president's eating habits and peccadillos to understand the political dynamics of the Trump presidency. True, but few of us are not fascinated by the chaos, lunacy, sheet incompetence and back stabbing that goes on behind closed doors. Well done, Michael Wolff. We already knew the emperor has no clothes, but in these difficult and dangerous times it is helpful not only to have a journalist shout this out repeatedly but to point in forensic detail at what the nakedness exposes.

Confirms everything you see and hear of Donald

Drump is the end of democracy as we know it

What really gets me is how many people cover for this man.
At 1st when I picked up this book I thought I was gonna read a lot of made up stuff and I am sure there is some made up stuff in here but I will be daimned if I can't help thing "TRUTH"!!!

fun to listen to Trump the idiot

the book reinforces how utterly ridiculous and stupid Trump is. possibly one of the worst leaders of any country ever. the big problem with the book is that it repeats itself a lot. but you do get reminded of so many pathetic Trump things!

A Whirl of Staff and Ideas

We in Europe feel strongly about American presidencies, perhaps because of their habit of declaring themselves the leaders of the free world. “Not of us!” we often want to cry. Obama was called the best American president Europe ever had; and conversely many of us heard about the election of DJT with horrified dismay. I wanted “Fire and Fury” to untangle the events of 2016 & 2017 and show some kind of comprehensible narrative arc. In the first few chapters, and the epilogue it has done that to some extent, so well done. The trouble is the context, the weather, the hollow-centred battering randomness of Trump’s White House. Not Michael Wolff’s fault obviously, but it’s frustrating. And then there’s trust: what’s Wolff’s agenda? One or two important questions go unanswered. Despite all that I would heartily recommend this book, it’s full of surprising, interesting,significant, sometimes funny revelations.
Ricci, UK

I am English so that may colour how I see this, but I thought the material could have been dealt with in a more measured way and less sensational. Surely the facts of this presidency and how it came about speak loudly enough? I found the reader to be very bombsstic and I would’ve appreciated a more subtle, and analytical approach. I get that The book will sell for its summary of deeply worrying, bordering on outrageous actions and decisions of this White House and the apparently inside experience of the author as he watched some of this in person but dialling it back 30% would have made it more palatable to listen to.

I found this book so interesting filling in shocking detail as a fly on the wall of the on going sage of what will doubtlessly be recorded in history as a turning point in human civilisation and culture from democracy to who knows where...

Nothing new nor insightful

I’m not that avid a follower of the news nor of Trump news, but there’s nothing in here you won’t already know from watching the odd Vox video. It paints Trump as inept and his staff as inept. It’s nothing you didn’t already know. It seems full of “interesting sources” and cool quotes, but they aren’t illuminating in the slightest.

Welcome to the circus!

To a non-american like me this book felt like a white house based sitcom where a 4 year old runs for president for the shits and giggles and then ends up getting elected. This book has comedy, drama and a lot of facepalm moments. Pure entertainment.

Interesting read! Raises renewed concern about fitness for purpose of Trump administration. If purely fact based, modern world is in trouble. 👌👌

Interesting, would of been cool to see a 2nd book about it after Steven Bannon’s departure like maybe about Rex Tillerson’s firing and more about the campaign. Interesting points thought

hmmm lots of names and posturing

interesting to listen to but not one of my favourite books of recent listening. ant

like the best book on trump I've read, better than all other books, intact if not the best, then it must be better than the best...well you get where I'm going with this.

Never let the facts get in the way of a great story. Unbelievable and entertaining. Fact is greater than fiction.

I liked the first half of the book. For me, it was entertaining notwithstanding the fact that it did not have any significant new revelations about Trump administration which had not been exposed beforehand. However, in the second half, especially toward the end of the book, Steve Bannon became the central figure, and the book was mostly concerned with his rage over his rivals. Sometimes even it seems that the book is kind of personal revenge by Bannon against Trump and his family, which could be because, in this period, the author had been accompanying the Bannon's gang. Whatever the reason was, it should be said that although there are many reasons for criticising the Trump's administration, there is no virtue in doing so from the Steve Bannon's (an alt-right politician) perspective. Furthermore, some themes like the animosity between Bannon and Trump's family, or the rivalries between different personalities and factions within the Trump administration were repeated again and again, which made those parts boring from my point of view. I would give the first half three stars but to the whole book, considering the second half, I gave two stars. Finally, it worth to write that in this book, the name of another book ("The Best and the Brightest") was mentioned. I became curious and bought that book too, and started reading it. From my point of view, the comparison between "The Best and the Brightest" and this book would demonstrate the difference between a good book ("The Best and the Brightest") and a mediocre one ("Fire and Fury").

I found myself vagueing out constantly.
I thought it was repetitive and I kept thinking, yeah, yeah Trump is an irresponsible self-righteous knob... blah, blah, blah... Trump, Bannon, Kushner, Ivanka, blah, blah, blah....
I'm sure much of the book is based on fact but it seems like there is a lot of assumptions and conveniently filling in the gaps. Maybe, maybe not?
I am not especially interested in politics but purchased this book because I was moderately was interested in the Trump story. I got about 9 hours in and aborted.
Probably worth a read if you're really into American politics.

FACT OR FICTION...THAT'S NOT THE POINT

Firstly, I enjoyed the book. I felt angry, sad, I laughed out loud so many times I lost count.
Many say it is a work of fiction, everyone will have an opinion and so they should. It is not hard to tell where a storyline has been "created to fill in gaps" and as such it is not trying to stand up as a "tell all factual guide and 100% accurate" piece. BUT!
There is so much there we DO know to be fact. So much DIRECTLY LINKED to specific people that it clearly the words of those mentioned. And so much that shows what a joke the situation is.
A great deal of the book reflects on Steve Bannon and his relationships with the Trumps, not just Don senior....VERY INTERESTING!
The writing style may not be to everyone's taste, but that is purely subjective. If you buy the audio book it is brilliantly read!

WORTH THE READ, WORTH THE MONEY, GREAT FUN, DISTURBING WHERE THE FACTS ARE EVIDENT. No matter what you think of the Orange man or the author, it is worth your time!

Best book I've read in along time,the last few chapters are the funniest and most disturbing for US citizens. Good luck America !!

An absolutely stunning delve into a year of crazy! It's a total must read! Riveting from the first to last, the best written political book ever.

A Portrait of Dysfunctional Ego.

Gripping. Fascinating. Truthful? Who cares? It's good listening. Enjoy with a grain of delicious salt.

Enjoyed book. Donald Trump is truly a unique man. Hes a Legend in his own right.

Chaotic and without theory

While interesting as a gossipy set of stories about Trump and ‘his people’, this book has no underlying theory or narrative and this leaves it rudderless. I lost track, frankly, of the players and found myself tuning out. Really well-read but lacking in structure and purpose.

US Duped by Fake President

Shocking in its detail. The candid revelations of how big a problem Trump is for the US nation is totally riveting.

Funny if not Real