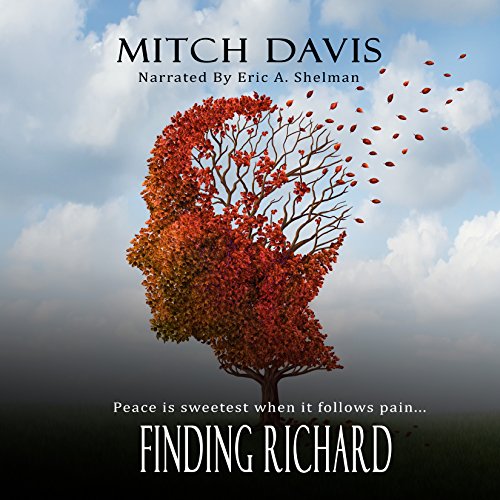 A world of deception.

A family torn apart by tragedy.

A man who stands to lose everything.

Richard Buell is surrounded by people who love him. But greater in number and in strength are those who want him to suffer. Peace and happiness are as distant to him as the stars, and he clings to the hope that death might provide him with the comfort he seeks. Until now. While spiritual forces wage war in the battleground of Richard's mind, he is forced to confront his greatest adversary yet. And the life-altering consequences of his actions transform him and the people he loves forever.

Finding Richard is based on the true story of a man suffering from schizophrenia and the delusions associated with the disorder. It presents the illness in graphic detail, allowing the listener to feel the inner conflict of Richard as he struggles to separate reality from a frightening series of mental deceptions. Finding Richard will leave you thinking about the man behind the story long after you have heard the last minute.

What listeners say about Finding Richard

I'll be honest with you, I was just looking for an audible book to listen to this week at work. Although I am not familiar with Mitch Davis or any of his books I am familiar with Mr. Shelman. He is my go to author and narrator. I would listen to him read the phone book. Since I couldn't find anything that interested me at first glance I thought I would see what Mr. Shelman had to offer me that I hadn't already listened to. That's how I came across Finding Richard. I thought it a bit odd that there were no reviews for an audible book narrated by Mr. Shelman. So I was intrigued. I downloaded the book and listened all week. Just started my 5th go around this afternoon.

Wow, people are really missing out an a fantastic story. A story of deep sadness, of wanting to belong, of demons that cannot be controlled, of a family's love that is stretched but never broken. A story of mental illness, in all it's ugliness, in all it's truths and in it's blurred line that stands between mental anguish and reality. A story of one man's fight to hold on, to not let go and to seek the help he knows he needs to go on. A story of love. We all have demons we hide, we ignore or make excuses for, we all do. We are all flawed, some just hide it better than others. Finding Richard is an incredible story and painfully real. Do yourself a favor and give Finding Richard a listen. Eric A Shelman, once again, nails the narration. I will be looking up Mitch Davis to see what other books he has written. Thank you Mr. Davis for this amazing story and to Mr. Shelman for bringing this story to life.

Found this book because I was looking for something by my favourite narrator and this came up. Really glad I found it, very interesting insight into the life of a schizophrenic, his family and care workers. A few very painful moments in it but overall a very good listen, some laughs, and it kept me enthralled the whole way through. If your looking for something a bit different or wanting to learn a little about schizophrenia give this book a ago. Very well narrated as always by eric shelman and good on the author for tackling a mental health issue within the confines of a well written novel.