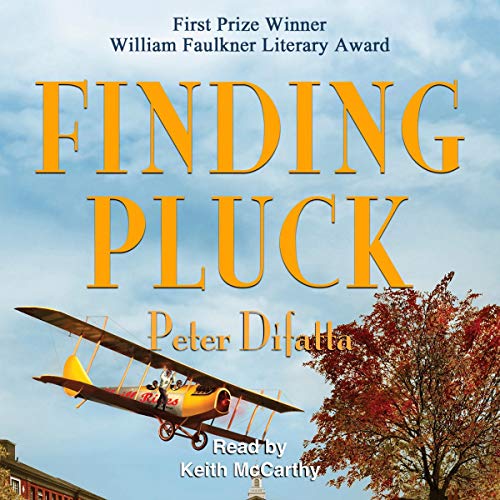 By: Peter Difatta
Narrated by: Keith McCarthy
Try for $0.00

It is 1995 in North Carolina and high-school student Taylor Hanes is struggling to escape his small-minded dying textile town. He finds his ticket out by lying on the application in order to get a full-ride scholarship to a state university. His actions generate unexpected consequences from his family and his hometown, but worse yet, he awakens the wrath of the scholarship’s long dead benefactor.

In his new life in college he must still contend with the hauntings, but his new girlfriend, a professed witch, and a group of friends ban together to help him unravel the reasons the spirit is restless.

The narrative deftly moves between the present and when the benefactor attended college in 1927, the pinnacle of the Jazz Age and a period of great change and moral conflict. As the friends dig deeper, the story draws parallels in the lives of the characters. This is a coming-of-age novel unlike any other with an unusual twist. Praised for its mystery, drama, honor and romance, Finding Pluck has been hailed as fresh and imaginative, eloquently written, entertaining, delightfully absorbing, and with something truly important to say.

What listeners say about Finding Pluck

Very touching and funny at the right times

"Finding Pluck" gives a unique and realistic look into LGBT life in a way that anyone can relate to. This page-turner tells a story that will keep you wanting more. You will feel like you are on the University of North Carolina campus. You will more than likely relate to at least one of the characters or know someone like one of the characters whether you are lesbian, gay or straight. The narration by Keith McCarthy is so compelling and adding so much to the story, you'll love it!
I was given a free copy of this book at my request and have voluntarily decided to leave this review.

This was an excellent story!I did not want to stop listening to it.A college bound student can not find a scholarship to fit his circumstances until an odd one comes up.He will have to pretend to be gay.He does a lousy job at this.I guess that was just how the story went.I was given this free review copy audiobook at my request and have voluntarily left this review.'

A mesmerizing tale of a young man’s struggles to step outside the life he has known and move into a new, more exciting one. Winning a college scholarship designated for members of the LGBTQ community, Taylor agrees to become an activist. The long since deceased founder of the scholarship returns to haunt Taylor whenever he fails to live up to the agreement.

Moving the story between two time periods, Difatta tells of the struggles that many face from those of small towns, the religiously small-minded folks, and bullies who are against anyone different from themselves. Difatta intentionally creates the story and carefully builds his characters and situations to tell the story of injustices, being ethical and moral, and humane.

The dialog is definitely “Southern” and realistic. Not only is the dialog realistic but so is most of the story; other than the paranormal twist to it, I would dare say authentic and powerful. The meanness, the fears, the small-mindedness are all daily headlines and reminders of our failures as humans. It is through Difatta’s skillful writing and storytelling that the listener stays engaged and engrossed. This is not an audiobook that one can listen to a little at a time, it is one that you will want to listen to from beginning to end because you just have to know what’s next!

I have not had the pleasure of hearing Keith McCarthy, narrator, before. I enjoyed his narration and voices. His enthusiasm and emotions were accurate and carried the story forward. I would enjoy hearing McCarthy again. His voice is soothing and versatile.

I really enjoyed this story with its gay rights theme and ghost story mystery thrown in. It’s well written and engaging. The narrator did a good job and handled female voices well, though I sometimes found he had a repetitive cadence that was distracting.

I was a given a copy of this book at my request and have left this review voluntarily.