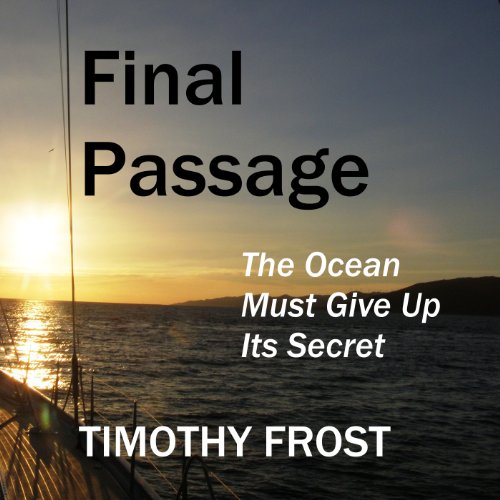 Final Passage: The Ocean Must Give Up Its Secret

Final Passage: The Ocean Must Give Up Its Secret

By: Timothy Frost
Narrated by: Dennis Kleinman
Free with a 30-day trial

What is the dark secret that Martin Lancaster's family seem determined to stop him uncovering? When Martin was 18, his father was tragically lost at sea during a transatlantic yacht race. Twenty-five years later, Martin discovers hidden logbooks in his mother's attic, and vows to find out the truth. His quest takes him racing across the Atlantic in the Columbus Cup, the world's largest-ever regatta, an event that becomes a personal voyage of discovery and disaster.

On the Caribbean island of St Lucia, with his enemies closing in, Martin must make one desperate final sea passage to discover the shocking truth about his family - and himself.

What listeners say about Final Passage: The Ocean Must Give Up Its Secret

A mystery of the sea comes alive

Final Passage: The Ocean Must Give Up Its Secret - By Timothy Frost
Narrated By - Dennis Kleinman Available at Audible.com

As a fan of Joseph Finder and his intellectual thrillers I put Timothy Frost's "Final Passage" in the same league with Finder. The main character Martin Lancaster was raised to sail. His father a expert yachtsmen and was the creator of safety devises for his yacht long before they became mainstream.

When at 18 Martin hears that his fathers boat was found empty and his fathers body found floating in the sea he wants answers. How could his safety conscious father fall out of his boat? When no Log Book is produced Martin becomes very suspicious. His Mother and brother tell him to leave things alone and so he does, but always in the back of his mind he wonders.

25 years later when moving his mother from their longtime family home Martin finds old logbooks his mother had hidden in the attic. This once again peaks Martin's interest.

As Martin searches for the truth, his business begins to suffer and his enemies see blood in the water. In a rush to solve his fathers death, save his business, and his life; Martin sets sail on one final voyage. One that may cost him everything for answers to his families past and why they are so desperate to cover up his fathers death.

The narration is top notch and the longer you listen the more intrigued and invested you become. "Final Passage" is another surprising find and worth every minute of your listening time.

Everything that can go wrong in your life!

Would you consider the audio edition of Final Passage: The Ocean Must Give Up Its Secret to be better than the print version?

I enjoyed Martin's character as you didn't know what would happen next in his life. If it wasn't his business failing, then it was problems with the sailboat or with his crew. The odds were totally stacked against him and he was able to get his life back after losing everything.

Have you listened to any of Dennis Kleinman’s other performances before? How does this one compare?

I enjoyed this audio book and he was able to build suspense around each turn and twist in the story.

I don't think it made me laugh or cry but it was interesting to see how he was going to get out of each situation.