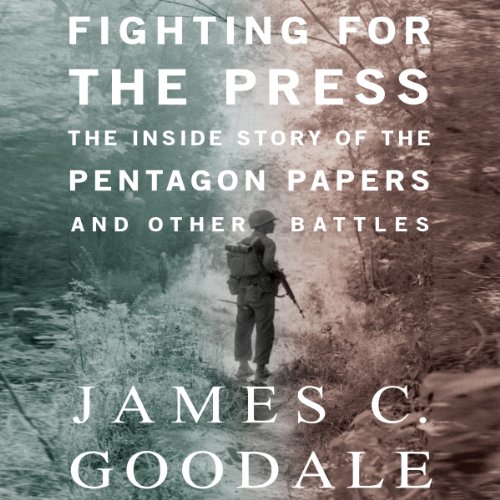 Fighting for the Press

The Inside Story of the Pentagon Papers and Other Battles
By: James Goodale
Narrated by: Kevin Free
Length: 9 hrs and 43 mins
Categories: History, American
4 out of 5 stars 3.9 (7 ratings)

Fighting for the Press

On June 13, 1971, the New York Times published on its front page a series of confidential documents outlining U.S. government policy on the war in Vietnam. These documents had been secretly leaked from the Department of Defense to reporters at the New York Times.

There followed a period of intense debate, carried out in the board rooms of the newspaper, the offices of its legal counsel, and ultimately the courts of the nation over whether or not publishing these documents would be in the country’s interest. The June 30, 1971 Supreme Court decision was a landmark in the history of press freedom.

James Goodale, chief counsel for the New York Times during the Pentagon Papers, tells the behind-the-scenes stories of the internal debates - legal, political, economic and corporate - and the reasoning behind the strategy that emerged. Goodale's narrative follows those weeks in June when the press’s freedom of speech came under its most sustained assault since the Second World War.

This is the story of a constitutional victory whose lessons are as essential today as they were in the 1970s - and of the personalities involved, including a disillusioned intellectual, aggressive reporters, meticulous editors, a cautious publisher, a vengeful attorney general, a beleaguered president and, in the middle of it all, the lawyer who urged his clients to fight for the First Amendment.

What did you love best about Fighting for the Press?

The narrative is a personal one. Goodale essentially testifies to his own role, very personally (lots of "I's", which took a bit of getting used to), which is what drives the story and makes it exciting. Due to the approach, the reader gets a mixture of personal, political, and legal history, along with a grounding in real drama (not TV drama) that can take place in legal cases. Readers will come away with a good understanding of the importance of the Pentagon Papers, the Pentagon Paper case, and the first amendment to the US constitution. And can go elsewhere if a deeper understanding is desired on any of these aspects of the case.