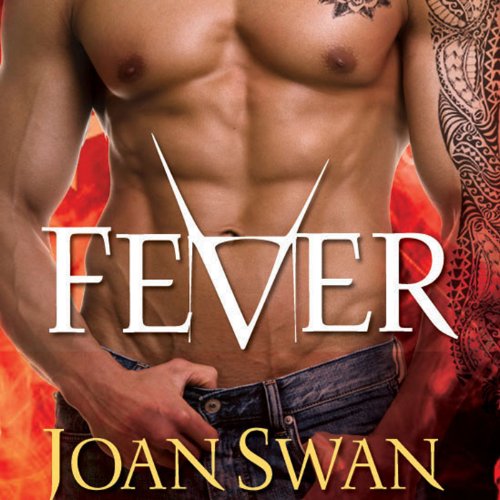 Dr. Alyssa Foster will admit to a bad boy fetish….

But when she finds herself face to face with a convicted murderer with a determination for freedom and an eye on her as his get out of jail free card, Alyssa knows she's in deep trouble.... Not just because Teague Creek is a prisoner desperate for freedom, but because his every touch makes her desperate for more.

A man with a life sentence has nothing to lose...

Teague Creek has one shot at freedom, but his plan to escape with a hostage develops a fatal flaw: Alyssa. On the run from both the law and deadly undercover operatives who know of his strange abilities, he needs to avoid trouble, but every heated kiss tells him the fire between them could be just as devastating as the flames that changed him forever.

"Fever is brilliant." (USA Today)
"Fans of The Fugitive and Heroes won't be able to pass up this smart, sexy, page-turning read." (Elisabeth Naughton)

What listeners say about Fever

The sexy parts in the way of the story! I was not crazy about the narrator either.

This may be the second time I've wasted a credit. Except this second time has been based on narration. The narrator was excellent for children or educational books. There was no excitement, no emotion. She just read the book. It felt as if it was being read to a child.

Needless to say, the story seemed interesting. I do not have kindle unlt'd. Ended up starting story and finishing up on the Scribd app. Narration was so awful, I had to skip to towards the end.

Other than narration, I recommend this book for purchasing. It is worth every penny. As soon as payday comes, I'm adding the kindle edition to my collection. A "MUST" have!!

I will edit my review at a later time, as I'd like to express how AMAZINGLY well written I thought it was. It was dark, sensitive racial issues were carefully done and NOT over the top. The romance was... beyond words with a paranormal touch. That's why I had gone berserk and got the book to read for free. I MUST have this book in my collection!! In the end, I was feeling happy and smiling for hours. Definitely a favorite one.

I know that my review is nothing but let me say WOW soul touching story...I so glad the author wrought another book

I'll finish this book by just reading it. I gave it 3 stars because the story was good, even though I haven't finished it yet, but the narration sucked. I'll leave my review on Amazon when I finish reading it. She didn't even attempt to sound like a man. She just read the book. I looked at the other books she narrated and should have known for them not to buy this. I'll know better the next time. This is a shame for the authors to have to suffer the loss of sales because the narrator was awful.