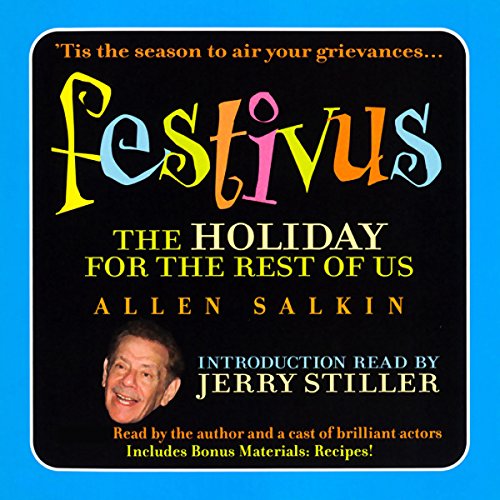 In one of the most memorable episodes of Seinfeld ever, Frank Costanza (Jerry Stiller) revealed some of the rituals of a Festivus celebration: a bare aluminum pole, a competition involving feats of strength, and of course, the traditional airing of the grievances.

Transcending television to become a national phenomenon, thousands of people now celebrate Festivus, partly to thumb their noses at the commercialism of the holiday season, but really because Festivus is downright fun! In this terrific, tongue-in-cheek guide, current and aspiring celebrants will learn: how to make their own Festivus pole (hint: tinsel is forbidden); creative ideas for feats of strength competitions; delicious Festivus recipes; hilarious songs; and so much more.

What listeners say about Festivus

Thought I’d get a kick out of listening to this and that this would be a big joke. And while it was humorous, I had no idea that this would also be a mini history lesson as well as this may have been an actual holiday and that the word itself was created 2,200 years ago by the Ancient Romans. Good stuff and definitely a great Seinfield episode still to this day!