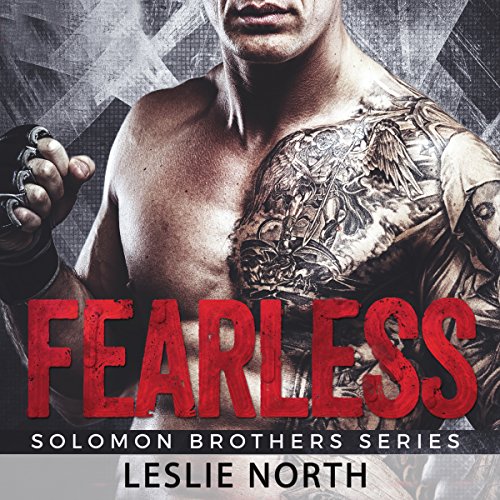 By: Leslie North
Narrated by: Rebecca Roberts
Try for $0.00

MMA fighter Henry Lorenz relies on discipline as much as strength to get through life. With his former mentor's boxing gym now in his hands, Henry is busy training a new generation -- including the troubled teen who reminds him of his own past. Despite a spirited social worker's attempts to intervene, Henry won't stop grooming the kid for success. The counselor is as stubborn as she is beautiful, but perhaps he can prove to her that there's more to fighting than knowing how to throw a punch. Guidance counselor Maggie Kavanaugh gives everything she has to keep kids away from the violence of the streets. She's busy teaching teens to use their brains, not their fists, to get ahead in life. When one of her most talented teens begins training in MMA, Maggie doesn't approve. The gym's owner may be covered in muscles and tattoos, but Maggie won't back down -- especially when a scholarship is on the line. She'll let the training continue, but she's going to be watching every step of the way. While Henry is trying to right old wrongs, Maggie is determined to shape the future. But as their attraction grows, a dark moment from Henry's past threatens to come between them. He may be a man of few words, but should he stay silent when speaking up may ruin everything? Even for a fighter like Henry, none of us are fearless -- particularly when it comes to love.

What listeners say about Fearless

This book by Leslie North was extremely well written. I loved the characters and how the author tied the other books in the series into it. This is a standalone listen. The Solomon Brothers are not related by blood, but friendship and being raised together. I loved how Leslie North used the imagery of Bridges in this book. Some are to be crossed while others burned is such a true phrase. I had read the book before listening to it and had fallen in love with the story. I was given this book as a gift and have voluntarily written this review. My review is not a synopsis of the book, but rather my opinion of it. Regarding the performance of the narrator, she fell short of my expectations. I felt like she was missing the emotional connection to the characters that I wanted.

The fighter and the pacifist

He’s an MMA legend with a checkered past. When he inherits his mentors gym he cools it on the MMA circuit and puts his time and effort into giving the neighborhood kids the chance to come in after school and have a productive outlet. She’s just giving up a teaching job and moved back to the old neighborhood to help with troubled youths.

One secret so dark it could put an end to an chance at love is bubbling just under the surface. You’ll have to finish in one listen to find out how it goes.

The narrator is awesome!

** Audiobook review** I was given a copy of this audio book for an honest review. This is book #3 in the Solomon Brother series by Leslie North. Once again, Rebecca Roberts does a fantastic job narrating. This book is expertly crafted with raw and real characters. This story is beautifully written, filled with emotion and bold characters who are unapologetic in their beliefs. Henry is insecure & harbors tons of self doubt until Maggie walks into his life. Highly recommend this series.

I enjoy Leslie North books. Leslie writes many interconnected story lines which I enjoy, I always hate to see a story line arc come to an end. Her stories revolve around alpha males and their lady loves and these three stories deliver on that. The male characters are caring, strong, smart matches to their mates. The women are wonderful loving individuals who care more for others than themselves. A thoroughly enjoyable trio of stories.

Another Hit for Leslie!

This is a great book, just the right about of Hot vs Emotion.
It covers the long time debate of what's stronger the mind or the fist? Well done, your going to love it.
Rebecca does a great job reading it.

I offered to review this audiobook because I am such an an avid reader but also almost exclusively audio due to my schedule. Because of this, and the fact that a bad narrator can destroy a great series, I can be very critical of narrators. Especially when books have a single narrator required to speak with different voices for multiple characters. Most cannot do it without having some errors where they use the wrong 'voice' for the wrong character. Rebecca Roberts does a good job in narrating this book. It was a very enjoyable listen and I didn't have any issues distinguishing between characters.

As to the story, I am not one to give a lot of specific story details since I feel you should read the story for that. This is book 3 in a fun romantic sports series, but can also be read as a standalone I have enjoyed that each book focused on a different sport for a change, with this one focusing on MMA fighting.. The book has good character development, great story line that focuses on hard subjects but ends in a happy ending. You won't be disappointed if you give it a try!

I received a free review copy of this audiobook and am voluntarily leaving a review.

A confrontational kind of romance with two people with opposing points of view, both convinced their way is the right way. Of course they fall in love! This can be read as a stand alone if you choose, but I highly recommend reading the other two books as well. This is an excellent series. There is a community spirit in this series that leaves you feeling very positive after you've read the books. I received a free review copy of the audio version of this book in exchange for an honest review.

This is the third and last book in The Solomon Brothers, a Sports Romance. I love this Series! Henry and Maggie's story is a great opposites attract romance. Henry is a MMA fighter. Maggie is a counselor. I love their chemistry, and I love how they help/mentor Roosevelt. Rebecca Roberts did a great job with the narration. #AudiobookObsession

This is the third book in the Solomon brother series and Fearless packs a wallop of a punch 🥊 Henry has spent his life trying to seek redemption from his past.. it haunts him.

Maggie puts all of herself into helping the children at the youth center, when a promising young man named Roosevelt reveals he’s spending time at a local fighting gym she’s determined to put a stop to it. That is until she comes face to face with Henry.. but when she learns his secret will she still see the man he has become versus the boy he used to be?
🎧 #AudiobookObsessionReviewer

My favorite series, I absolutely love the Solomon Brothers. Henry is hot and with so much baggage but Maggie is exactly what he needed to make the perfect balance. I’m in awe with their personality and goals in life. Definitely a good romance to get lost in it. Perfect narration!

a new author I found. I rather enjoyed the book. love prevails when both realize what each other could bring to the ring.

this is a new narrator as well. I enjoyed the many characters she could posses.

Henry is an MMA fighter and Maggie is a guidance counselor and they both love and want to save the same city kid. They came from different worlds, but love came anyways. This was a great story even without reading books 1 and 2, and a great listen.

Henry "Lawless" Lorenz is an MMA fighter, he runs Sal's gym now that Sal is gone and he is doing his best to keep things afloat. He knows how much this gym means to kids like him. He has been mentoring Roosevelt and training him, the kid is good and smart and his instincts are perfect for professional MMA.

Maggie Kavanaugh is a counselor and has been looking out for Roosevelt and helping him grow into the smart young man she know he has the potential to be. She has been working hard trying to keep the kids she counsels off the streets and away from the violence that comes with the streets. When she learns about Roosevelt training at the gym she decides to go have a chat with the gym owner himself to keep Roosevelt away from the violence of it all.

When Maggie and Henry start working together to help Roosevelt out of a bad situation, they never thought the sparks would ignite like they did. BUT can a violent MMA fighter and a pacifist who are as different as night and day really find a way to work together? Can they find a way to be together.. Or will it all just fall apart?

Henry and Maggie are so different but their attraction to each other is very much the same and very steamy! I love how they start at opposite ends of the spectrum and are like magnets, they can't stay away without force. The situation that finally brings them together is unmistakably heartbreaking, but it's eye opening. Not only for them but for the reader as well. Life isn't always black and white, there is so much gray area. Sometimes you also realize the events that altered your life at a young age and seemed to be so momentous at the time aren't always as you remember them to be. When something happens to a person it makes you paint them in a special light but the truth comes out eventually and that in itself is life altering.

People change, life changes. Change is inevitable and sometimes acceptance is the best thing you could ever do. Letting go is freeing and brings more happiness than you ever imagined it could.

This was my favorite book in The Solomon Brothers series. I loved the growth I witnessed between the two of them and the happiness that came along with it. I loved the push and pull and uncertainty of it all.

The narrator did a wonderful job capturing the emotions of this book and was entertaining throughout the book. She brought the book to life!

Wow loved Maggie and Henry’s story. I have not read Solomon brothers before so I hope to read the first 2 next