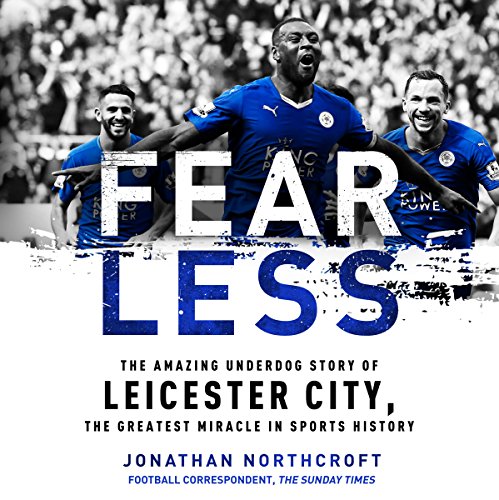 By: Jonathan Northcroft
Narrated by: Nathan Turner
Try for $0.00

King Power Stadium, countdown to kick off. Out on the pitch, a lone brass player sounds the haunting 'Post Horn Gallop', for 80 years the home players' entrance tune. Spines tingle. Air is gulped into opposition lungs.

Game time, time to begin the chase. Burning fox eyes peer down from between the decks of one of the stands. On the stadium's outside wall, a royal-blue LCD display says '#Fearless'.

Welcome to Leicester City. They were always a club with a difference, but in 2015-16 they created a story that in modern football stands unique. Who could believe it? From relegation certainties to champions of England.

It was when, on behalf of every small club, dreams were hunted at the King Power, a season where the impossible became merely quarry. As 5,000-1 shots when the campaign started, Leicester's transformation has been remarkable. This is the most incredible cast of written-offs, grafters, misfits and journeymen coming together in a special time and place to simultaneously have the season of their lives.

Fearless will document Leicester's hunt of their impossible dream. It will tell the greatest football tale of the Premier League era in loving detail, with the inside track. Now that Leicester has gone all the way and won the title, it's the best story in world sports - for years. Champions of the Premier League.

The side who'd been adrift at the bottom 12 months previously, who's started the season as relegation favourites, whose manager was favourite to be the first one sacked once the campaign got underway. A League One side only seven seasons previously. A squad of £500,000 and £1m men. Leicester. Ridiculous. Miraculous. Fearless.

What listeners say about Fearless

Outstanding, this book lives and breathes Leicester’s remarkable season, not only in words but is brought to life by the passion and emotion in the narration, it’s more than a book, it comes across as a play/film and even if you’re not a football person you’ll be on the edge of your seat.

I really cannot recommend this highly enough, if you only ever buy one book from Audible make it this one, Leicester’s remarkable story needed telling as a remarkable story and that’s exactly what it achieved.

Thank you for the pleasure your book has given me.

Captures the spirit of Leicester

This book captures the spirit of Leicester and all that the City was before the title win. Each part of the team and club that won the league is well documented here, using interviews and the various histories of the players and management throughout. An absolute must read for anyone remotely passionate about football or interested in the history of the City. The audiobook is really well narrated too.

Bringing it all back.

Great memories and brought everything back from that wonderful season. The detailed back stories were fantastic and flow of the book was well thought out. A story for everyone apart from maybe Spurs fans 😉

Fearless is an excellent listen. inspirational stuff!! Well read and filled my journey quite nicely.

An amazing story, interesting listen and one I would highly recommend to all sports fans

Being a Leicester fan and more importantly being there through the survival season to go on to win the Premiership, I was more than interested in reliving the story, but there were loads of facts and stories that I was unaware of.

As a city fan this was perfect to relive the amazing season with interesting insight.

Gave an inside view of Foxes fantastic season with loads of little known snippets of knowledge both football and un football related.

The accents put on by the narrator were funny even if unintentional.

What a great book

This book was a great way of telling the story. Not only it went through the season but had so many stories about the players. This is a great book and if there is one book you want to read about Leicester's miracle, this is the one.