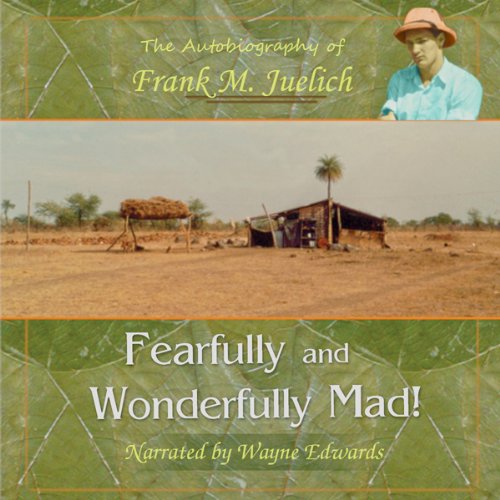 The Life of a Living Epistle with a Few Pages Missing…
By: Frank M. Juelich
Narrated by: Wayne Edwards
Length: 5 hrs and 44 mins
Categories: Bios & Memoirs, Personal Memoirs
4 out of 5 stars 4.0 (1 rating)

Frank’s autobiography shows him to be truly one of a kind. For example, while he is a good team player he is always fiercely individualistic and independent, and should circumstances bring about a conflict between the two his independence wins out. This autobiography also shows that from his youth Frank was adventurous. From his teenage years he travelled - first to the countries neighboring his homeland (Germany), and then, at age 19 he travelled from Germany to Pakistan by bicycle.

This, in spite of times of deep loneliness along the way, lack of money, and sometimes fear in often dangerous circumstances. Further, Frank reveals that he has from the beginning shown a strong Protestant work ethic - even in his days as a young Catholic. He has always been driven to complete what was started. Finally, beneath a façade of, shall we say, “earthy” humor is the heart and soul of a deeply, intensely spiritual and godly man. All of this is to say that just as Paul was the only one in the primitive church who could have been the apostle to the Gentiles, so Frank is the only one of my acquaintances who could have ever been used by God to found the boy’s homes which are called Prem Sewa Shikshan Sangh.

Taken from the foreword by Dr. Roger Stronstad.