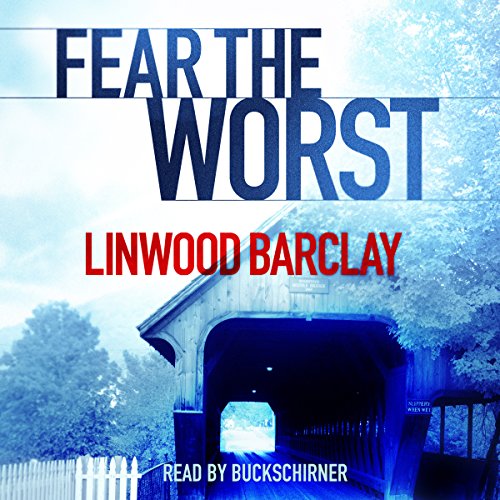 By: Linwood Barclay
Narrated by: Buck Schirner
Try for $0.00

One chilly morning a man throws himself off a Great Lakes ferry. An apparent suicide, the body is never found.

Five years later, we learn that the man had faked his own death. An accountant who had become unwittingly mixed up in a criminal conspiracy, he was being threatened by a ruthless mobster: tell us where the money is or we'll kill your wife and eight-year-old daughter.

If he'd been able to hand over the money, he would have done it in a heartbeat. But he couldn't, and so the only way to put his family beyond reach of harm seemed to be to make himself dead.

He has a different life now, and a different identity, and he never allows himself to think about his family. The fact that they are safe is all that matters.

Until one day he sees an article in USA Today about a 13-year-old girl who's won a national spelling bee. There's a picture. It's his daughter. And in the background there's his wife, holding hands with a man. Of course, he should have expected it.

What he didn't expect was that he recognized the man, and the last time he spoke to him he was threatening to kill his wife and daughter. He puts the paper down, and knows this changes everything. Now he's going to have to go back, and save his family one more time.

What listeners say about Fear the Worst

Error in the summary

There is a mistake here. This book is a about a young girl who disappears and her fathers hunt for her. Quite a thriller. Very good characters. Father is a car salesman. The summary that appears on the Audible site seems to be for some other book! Audible can remove this review if they fix the problem!

I'd love to know from which book this blurb has been taken, because it sounded interesting. But still, this was yet another great Linwood Barclay read.

A nightmare journey to find a missing daughter

Early on in the book Tim Blake's teenage daughter Sydney goes missing and thereafter he's thrown into a nightmare of false leads as he tries to track her down not knowing whether she's alive or dead. The police even suspect that he's murdered her. The book veers from one crisis to another for Tim and the bodies pile up. Preposterous in many ways but gripping and enjoyable nevertheless. There's some humour to leaven the grimness in the foibles and interactions between Tim and his girlrfriend, and with his ex-wife and her new husband.

Would you try another book written by Linwood Barclay or narrated by Buck Schirner?

I loved 'No Time for Goodbye'. It is a solid 5* read/listen, so yes, I will try others. The narrator is technically very good, but his voice grated here. I wouldn't rule out others narrated by him. It would depend on the book.

What was most disappointing about Linwood Barclay’s story?

It frequently got bogged down, going nowhere. I was interested enough to want to know what had happened to continue, but I had to wind forward 30 minutes on 3 seperate occasions in frustration to make it to the end.

Did Buck Schirner do a good job differentiating each of the characters? How?

He was technically very good indeed. Sadly, his 1960s old American guy voice didn't work for me. After all, the main character in this book was 36-years-old and most of the others were younger still.

If you could play editor, what scene or scenes would you have cut from Fear the Worst?

Where do I start? It needs to lose plenty.

I tend to return books if I am not enjoying them, but there is something so pleasing about Linwood Barclay's prose that, despite my frustration with this book, I just couldn't.

I found the narration of this book rather irritating, some of the voices are awful and off putting. The story was OK, a different narrator could have made it so much better.

Lots of suspicion, mystery and confusion; all wrapped into this book. The narrator within, made this, extremely compelling. Worth listening to!

I'm new to this author and somewhat enjoyed the first book I listened to so got another. This one is basically the same as the first with a few small differences. After reading the synopsis for another book I was considering don't think I'll bother. The book is not bad but it's so similar to the first I got confused when I mixed the characters since I listened to them one after the other.

Brilliant, so many twists and turns, amazing writer. 😀😀😀 recommended have all his books, want to get them on audiobook. Happy

Another unexpected chain of events. Easy to feel sympathy for the leading character. Very very good again by Linwood Barclay.

very slow to start ... good story . narration good .
it all finished very quickly and not expanded on after .

Not my favourite Linwood Barclay but enjoyable. Super frustrating that Audible decided to just put chapters in random places and not where the actual book chapters were. Also there’s some weird music at random intervals that really threw me, still haven’t figured out why it was there! 🤷‍♀️

the book was ok, performace was ok but the ending was left very open, with too many ends not tied up for my liking.
wouldnt be opposed to reading another book by the author though

I love this blokes books. You never know the outcome till right at the end. Always action, but not over board. Always story, but not drawn out. He mixes them perfectly to combine a book you cant put down.