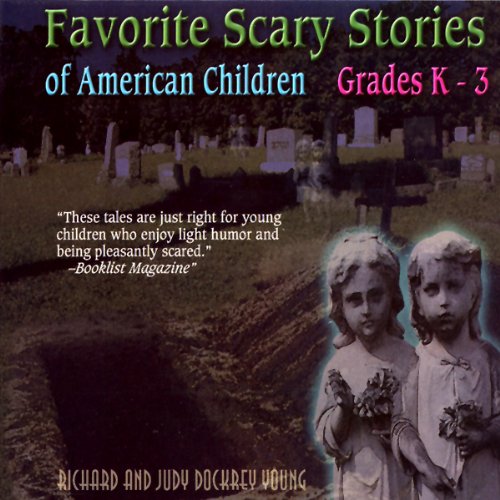 Everybody loves scary stories, and nobody loves them more than children. Storytellers Richard and Judy Dockrey Young gathered these stories from the most discerning of critics: the children themselves. These are the tales kids tell most often and most often ask to be told.

The stories in this multicultural collection come from the Ozark Mountains and the desert Southwest, from Native Americans and Hawaiians, and from American immigrants from such faraway places as Japan and Laos. The 14 favorites in this collection for younger children include: "The Red Velvet Ribbon", "Bloody Mary, Bloody Mary", "The Changelings", and "Stop the Coffin!"

"Excellent!" (The Washington Times)
"Richard and Judy Young are remarkable narrators." (Booklist)
"These stories have stood the test of time through retelling and they are identified by children across the nation to be among their favorites." (Orange Sentinel)

What listeners say about Favorite Scary Stories of American Children

This was a fun collection of spooky stories, some scary, some funny. Wonderful narrators that bring a smile. Great for the whole family and for a fun thrill.

Mainly Southern US Folklore, but not Scary Stories

This is a great collection of folklore, mainly from the Southern US, but there is a little variety, such as the Golem, a Jewish folk story from New York. I wanted to rate this much higher and I would have, if it had been called “Stories From American Folklore”. However, these are not, “Scary Stories” of the sort people tell in the dark with a candle or flashlight, or around a campfire. I was looking for ghosts, urban legends, maybe a cryptid or alien story. This has one ghost and one witch story, and many with trolls, goblins, and creatures I’ve never heard of. The narration is excellent,..masterful and lively, but not at all spooky. These are almost all stories for very small children, yet are horrific like the classic Brothers Grimm tales. Most were likely told to scare children into staying indoors at night, and to be careful. They would appeal to kids who like silly names and sounds, yet there are stories about killing children and cutting the legs off a barking dog, until the owner gets fed up and…let’s just say it gets worse. To the book’s great credit, there is a clear sense of right and wrong. There is often a clear moral expressed, though it is sometimes lost in the horror. Characters who do terrible things don’t prevail, but neither do some of their victims. Then, there are victims of heinous violence that are brought back to life, a theme i avoid with kids because I think it’s important to send a clear message about the permanence of death, and the consequences of violence. I realize that earlier generations heard them and, by and large, turned out ok. However, I would recommend this for 4th-6th Grade, at minimum, folklore buffs, and people who grew up with these stories as children. As an urban legend/ghostlore buff with an occasional interest in folklore, it was a fun read. I liked the White Wolf and Golem stories, and the percussion in the witch story. As cultural anthropology, it’s an interesting look at the stories kids were raised with in the historic Southern US.

all the old stories

I enjoyed this very much. It's very cute and I grabbed it in anticipation to play for my kids on our camping trip since they likely haven't heard them, like I did growing up.