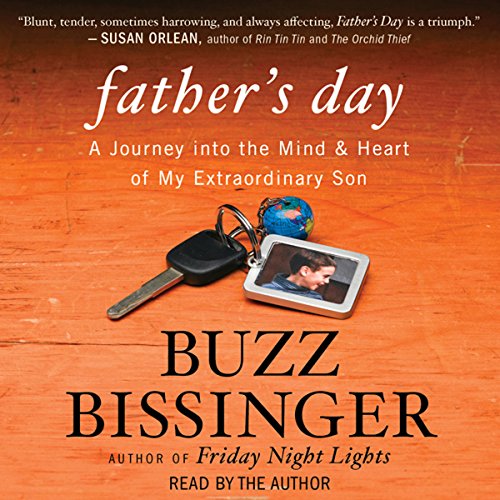 A Journey into the Mind and Heart of My Extraordinary Son
By: Buzz Bissinger
Narrated by: Buzz Bissinger
Length: 8 hrs and 55 mins
Categories: Health & Wellness, Children's Health
4.2 out of 5 stars 4.2 (25 ratings)

A remarkable memoir from the best-selling author of Friday Night Lights and Three Nights in August.

Buzz Bissinger’s twins were born three minutes—and a world—apart. Gerry, the older one, is a graduate student at Penn, preparing to become a teacher. His brother Zach has spent his life attending special schools. He’ll never drive a car, or kiss a girl, or live by himself. He is a savant, challenged by serious intellectual deficits but also blessed with rare talents: an astonishing memory, a dazzling knack for navigation, and a reflexive honesty that can make him both socially awkward and surprisingly wise.

Buzz realized that while he had always been an attentive father, he didn’t really understand what it was like to be Zach. So one summer night Buzz and Zach hit the road to revisit all the places they have lived together during Zach’s twenty-four years. Zach revels in his memories, and Buzz hopes this journey into their shared past will bring them closer and reveal to him the mysterious workings of his son’s mind and heart. The trip also becomes Buzz's personal journey, yielding revelations about his own parents, the price of ambition, and its effect on his twins.

As father and son journey from Philadelphia to Los Angeles, they see the best and worst of America and each other. Ultimately, Buzz gains a new and uplifting wisdom, realizing that Zach’s worldview has a sturdy logic of its own: a logic that deserves the greatest respect. And with the help of Zach’s twin, Gerry, Buzz learns an even more vital lesson about Zach: character transcends intellect. We come to see Zach as he truly is: patient, fearless, perceptive, kind—a man of excellent character.

What listeners say about Father's Day

At the center of this nonfiction book is a cross-country trip where writer Buzz Bissinger (Friday Night Lights) drives from coast to coast with his handicapped adult son, Zach. Zach has a photographic memory and an obsession with maps. The author is brutally candid about his experience as the father of twins, one being mentally handicapped. Bissinger is not afraid to show his less-than-perfect side as he tries to deal with this unexpected fatherhood experience and a challenging trip. His honesty is what gives the memoir its power. Bissinger expertly weaves in stories from throughout their lives, and the book flows well. This book is funny and sad, and always real. Bissinger did a great job narrating. I enjoyed it a lot.

Well, heated, maybe...
This is definitely very well written, and it's certainly honest and candid. Bissinger is unflinching in his honesty to the point where it struck me that he was being self-serving, rather "Woe is me, look at what a low life I am," kind of guy he is.
The whole premise of the book, a spur of the moment jaunt across the country is like everything in the book, a blip of an idea that comes to Bissinger that he crams down everyone's throat, then he has buyer's remorse, then he tries to backtrack, then he tries to talk his way out of it, then he blows up on everyone, then he goes through with it.
This is the way of the whole book. The way of Buzz's life.
And I don't know how anyone can stand living with him.
Zach is extraordinary, yes, because how he can manage not turning into a lump of jelly as Bissinger flies off the handle time and time again, spewing profanity about how stupid and messed up things get on the trip, and how this that and the other that happened is a major f-up, just shows he has a strength of character and of courage that is beyond your average individual.
The trip is almost entirely self-serving for Bissinger, seeded with his expectations and peppered with promises made to Zach that he doesn't even try to keep. He has excuses for why he doesn't try, he's very candid and honest that it's just because he's pissy, in a bad mood, etc. Then there are the burning memories he has along the way that cause rage that turn into flat out explosions where, again, he's very candid and honest. In those cases, he wants a scapegoat: Zach is it as Buzz flies off the handle, and it's painful to hear. As Bissinger is the narrator, as he prides himself on his "candid honesty," he puts every sneer, every bite, into the depiction of his searing, out-of-control rage.
He apologizes later to a very, very quiet Zach.
So that makes it all better.
And every now and then, he notices the beauty of Zach and his personality, doesn't strangle Zach for his quirks.
So that makes it all better.
All in all, this was a decent book, but I felt as though I'd been chewed up and spit out in little acid-covered pieces. I'd just finished listening to "Life, Animated," and appreciated this more "real" version of how hard things can get when your dealt more "X"s than check marks, when maybe your temperament is less pie in the sky and more real and such... But this?
Wow.
Zach is a beautiful person. And Bissinger's son Gerry is jaw-droppingly wise and loving.
Bissinger needs to listen to his own "wise" words that he tosses around at the end there and actually apply them. Because there are some wonderful people in his life that he's not appreciating. This book shows true what he says his wife has told him pointedly: He sucks the fun out of everything.

Would you consider the audio edition of Father's Day to be better than the print version?

I think the story is powerful in print, as well as audio. It is a father's journey to connect with and become close to his adult son with special needs. I heard the author interviewed by Emily Rooney, so I decided to get the audio book.

I have two: the author Buzz who narrates this true story and his son who shows wisdom despite his mental age of 9/10 years old.

Have you listened to any of Buzz Bissinger’s other performances before? How does this one compare?

No. I will have to check them out.

A father's journey to connect with his son.

Wonderful, inspirational book. Thanks Buzz for so courageously sharing your family's story. I am going to recommend that our special education collaborative invite him to come speak to parents and special educators.

This is the truest tale i have ever read.

Would you consider the audio edition of Father's Day to be better than the print version?

I didn't read the print version, but it couldn't be any better. These people, Buzz and Zack, lived in the telling of their story. And I was right there with them. Buzz is not the most likable guy in the world, nor the best father. I know this because he told us the true story. I read this book after hearing a PBS interview of Buzz, in which he mentioned that he was disappointed that "Father's Day" had bombed. He was wrong. This is a beautiful, tough, true story of a father and son....bumps and all.

What was one of the most memorable moments of Father's Day?

Listening to the many, humiliating episodes of Buzz falling apart and blowing up...blaming Zack for all that was wrong. I wanted to slap him back to sense...and i wanted to cry for them both.

Which character – as performed by Buzz Bissinger – was your favorite?

I don't see how any father could help but love Zack. Maybe I'm wrong about my limitation to fathers, but that's all I can speak to.

No...I had to stop for hours to think about what i was reading; about what was really happening.. Therefor the book took me two days.

I read "Friday Night Lights" decades ago. I think it was a wonderful, epic, true story. I want more of Bissinger. I'm selfish that way. I'd like to read more about his life...leather and all.

I quite enjoyed this memoir of the author and his developmentally delayed son. Very interesting and touching. An honest look at what it is like to parent a child with special needs.