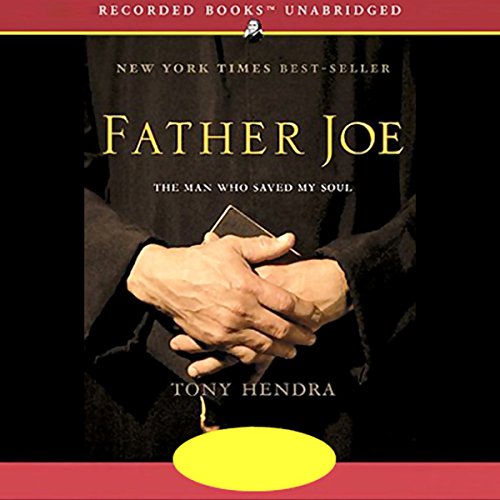 This runaway New York Times best seller is a book to savor and treasure. Author Tony Hendra, a National Lampoon and Spy magazine veteran and one of the world's greatest satirists, delivers a beautifully written, humorous, and profoundly moving memoir reminiscent of Tuesdays with Morrie.

At 14 years old, Tony began an affair with a married woman that ended when the jilted husband, a devout Roman Catholic, sent Tony to a Benedictine abbey. There, Tony met the remarkably kind and compassionate Father Joe. For the next four decades, Father Joe's guidance never faltered, even as Tony failed in marriage, fought substance abuse, and struggled to find meaning.

The New York Times says Father Joe "belongs in the first tier of spiritual memoirs ever written." It is a wondrous celebration of a saintly man, and it is impossible to forget.

"The writing is certainly quite smart....[A] heartfelt tribute to a kind and wise teacher." (Kirkus Reviews)

What listeners say about Father Joe

I walk the dog in the park a couple of times each day and had just bought my first MP3 player to listen to music as the dog took his time sniffing at everything. On a fluke, I decided to try an audiobook -- something I had never tried. I browsed through the website for something light and meaningless, mostly to listen to in 20 minute bursts. I wasn't very careful because I thought I had selected some best selling novel by an author I had never heard of, Tony Hendra.

This book grabs. The poor dog started getting several walks throughout the day so I could keep listening to what turned out to be a powerful autobiography of Hendra and a brilliant portrait of Father Joe. I finally sat down on the sofa and listened. Then after finishing the audiobook, I gave my player to my wife, who very reluctantly started to listen to it. She can't put it down.

I'm going to listen again after I give the book time to brew and stew in my mind. I read maybe twenty books a year and this is the best of the last 200 or so, even though I listened to it. It is beautifully written and well read by Hendra, himself.

I usually prefer to read books myself in braille, but Father Joe is a Must-Read in audio format. Tony Hendra's wit and Father Joe's wisdom and unconditional love are compelling. As the author, Mr. Hendra superbly narrates this account. Mr. Hendra captured my interest with his humorous descriptions of his misadventures and realizations. Whether he is a the height of ecstasy and faith or despairingly attempting to negate his existence, the constant concern and compassion of Father Joe offers hope and keeps this book from lapsing into self-absorbed melodrama. Outstanding! Extraordinary!

From the moment I began listening and before I came to know who Tony Hendra is, I was struck by his skill as an artist with words. The book was recommended by the abbot of a local Benedictine monastery during a recent retreat. It is a beautiful story. Wherever one might be on his or her spiritual journey, Fr. Joe will touch the heart and uplift the soul. I am sure I will listen again.

THE DEPTHS OF THE SOUL REVEALED

I purchased this book because it was on the New York Times Best Seller List and because I enjoy inspiring spiritual works of depth. However, the title of the book did not give any hint at depth and I was expecting some syrupy saint story of no great consequence.

The steamy first chapter took me by surprise. This is spiritual? As the plot developed, I began to see parralel lives but only one soul. On the one hand we are shown the saint, and on the other the terrible sinner. But somehow, by the time I got to the end of the book I saw them both as saints in their own way. "There but for the grace of God go I," comes to mind. The saintly priest could just have easily gone the way of the sinner, and vice versa. Both are infinitely loved by God, and both are redeemed. But only the saint knows this, and he has to lead the other into the circle of his light.

Most starling, I also saw myself in this story. As the sinner searched and the saint enlightened, much light was cast in my direction. This is a story of love and redemption, high drama, wit, depravity, and sanctity. I loved it!!! Don't miss it!

10 Hours Not Long Enough to Spend with Father Joe

How generous of Tony Hendra to introduce us to his friend and spiritual touchstone, Father Joe, a cloistered Benedictine Monk. Because Tony reads his book, he speaks in two voices, his -- and the voice of Father Joe which he mimics quite well-- there is never any confusion about who is talking. Their first conversation and meeting occurs after the "Teutonic/British" husband of an unhappy French woman drags 14-year-old Tony to the monastery so that Tony can explain why he is having a "torrid" affair with the professor's wife. Torrid for a pubescent teen - he confesses that he has gotten to 2nd base. Rather than condemning the boy to hell, and ordering him to pay penance, Father Joe kindly says: Tell me everything dear-- and gently listens. Over the next forty years, until this saintly man dies, we get to listen in to their interesting conversations, sympathize with Tony as he faces various personal and professional challenges, and then hear Father Joe's counsel. One example: around the age of 16, Tony falls in love with a statue of the Virgin Mary --and sneaks into the library at his school so that he can gaze adoringly at the photo in the art book. He confesses this to Father Joe. His penance? He must go out on a date with a pretty girl. A satirist who moved from England to the U.S., Tony was a top editor for National Lampoon, the precursor for Saturday Night Live. As someone who is a born entertainer and story teller, he decides that he wants to become more than an editor, he wants to become a writer. How lucky we are that he made this decision, and wrote this book for it is truly wonderful. I wish Father Joe was still alive...I would have liked to have meet him in person, though I feel fortunate that I got to meet him through Tony Hendra. Highly recommend --- Even if you do not think of yourself as religious or spiritual. Though religion is an element, love is the substrate. Erudite and witty, Tony conveys a hopeful, positive message. Recommend highl

the first review I have been compelled to write and done through tears upon finishing this book. If only I had a father Joe. A must to hear, read with love about a man of love

What a beautiful book! I could listen to Tony Hendra quote (and imitate) Father Joe all day. We all try to overcomplicate life and Father Joe brings us back to what should be our foundations. Not to judge, but to love. Not to fear, but to love.
Sounds easy, but Tony Hendra is very open about his abilty to forget these lessons and self destruct in the process ... and then return for another visit.

I was about half-way through listening to "Father Joe" when I learned of the accusation made by Tony Hendra's daughter from his first marriage that Hendra had left one important transgression out of this confessional auto-biography. The daughter maintains that Hendra sexually abused her when she was a child. This accusation, which Hendra denies, is unproved legally, though the daughter has written her own book ("How to Cook your Daughter," its title derived from an article Hendra wrote for the "National Lampoon") giving a detailed account of the alleged abuse.

Learning of that accusation, however, did not color my consideration of "Father Joe" overly much, because I had already come to the conclusion that, while Father Joe, the monk who befriends Hendra as a teenager and provides spiritual guidance to him throughout his adult life (and, as it turns out, many, many others), is a fascinating character, this story is really about Hendra and his supposed redemption. The problem is, it is quite clear that Hendra is not truly redeemed, or at least that he doesn't fully "get" what being redeemed means.

Despite the fact that this book is written retrospectively at a time when Hendra supposedly had re-embraced his Catholic faith and learned to take responsibility for his own life, Hendra repeatedly lapses into self-pity and vitriolic recriminations against those who have "wronged" him. His attacks on those who followed him at the "National Lampoon," his co-workers on "Spitting Image," conservative politicians (which borders on the paranoid), and, ironically, liberal theologians and the post-Vatican II Catholic Church, all belie his claim of redemption. Clearly, Hendra still has "contempt for the world," and not the selfless detachment of "contemptus mundi," despite Father Joe's painstaking efforts to teach him the difference.

That having been said, Hendra's narration style is excellent. The book, if ultimately unsatisfying, is nonetheless a good listen.

An outstanding reflection of an interesting life that certainly would have been diifferent if not for the presence of the stabilizing spiritual influence of an earthly saint. A must read for anyone that has had a crisis of faith or existence. Beautifully done - narration and all. Thank you Tony Hendra.

beautifully written about a beautiful man

At times it may seem too much about the author and his life problems - but as you finish you find this is necessay to understand the spirituality and amazing grace of Father Joe. I was glad I listened to the end.