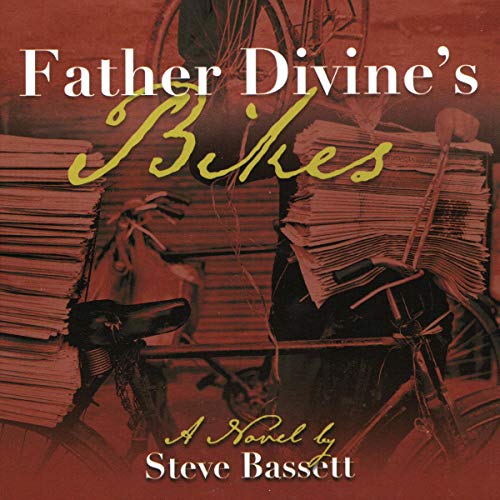 Father Divine’s Bikes exposes the dark underbelly of 1945 Newark, New Jersey, a city that boomed during World War II but finds itself unable to cope with the peace that brings joblessness, despair, and crime. As deeply entrenched white enclaves are squeezed by the mass migration of blacks, escape routes for poor ethnic whites rapidly close. Two Catholic altar boys living in a world ripe for grifters, like Father Divine, soon learn that his promise of heaven on earth has hellish consequences.

In the autumn of 1945, a battle erupts when the city’s competing mobs end their truce. When it gets bloody, other criminal forces poise to move in. Bookies, using Father Divine’s controversial International Peace Mission Movement as a front, recruit Joey Bancik and Richie Maxwell to run numbers under the guise of newspaper routes. The boys' families welcome the few bucks they can put on the table.

Meanwhile, their parish priest and two homicide detectives fear the numbers racket will entrap the boys in a world of crime. Turf wars, murders, and a corrupt police department in bed with the mob form a dark and gritty backdrop against a story of post-war Newark and the violence that permeated it.

Father Divine's Bikes is the first audiobook of the Passaic River Trilogy. The final edited draft of it's sequel, Payback: A Love Story, will be completed in early 2019.

A Snapshot at a Time In History

Father Divine’s Bikes, other than being a hard title to remember (I kept calling it Father’s Divine Bikes when referring to it to my wife or other when talking about it) tells a story about World War II era Newark. It’s a story about kids and it’s also a story about gangsters.

Bassett does a phenomenal job describing Neward and what going on in and around the city during wartime. He goes into a ton of detail around this and spends quite a bit of time on it. He also does a pretty good job introducing and explaining who each new character was.

I ran into some problems with these descriptions though – I like detail and I like to know who people are – but sometimes an author can spend too much time describing things and lose parts of the story. Sadly, that happened to me numerous times throughout Bikes.

Once we got into the more back-and-forth parts of the story – it picked up a bit but it was pretty late in the novel. Bassett’s writing style lends itself to his background (Newspaper) just due to the way that he would describe things.

The things that I enjoyed about the story was that it was really easy-reading. It was one of those books that just flows and doesn’t pull you out of the moment for random things. Sure, there may have been some extra detail here and there, but overall the story did flow well throughout.

Bassett wrote a nice fictionalized story that takes place in a moment in history that I enjoyed reading about. Father Divine’s Bikes was a story that I’m glad that I picked up, even with what I described above. Because it took place during WWII and gave some history along with fictionalized parts, I ended up liking the book despite some of the flaws that I personally had with it. I guarantee other people will like it and see no flaws at all (I’m not a fan of Stephen King – he over-describes stuff as well and tons of people love his work!)

I thought that George Kuch did a good job narrating this book. He kind of had a news reporter voice, which in the case of this book, it really helped the historic feel of it.

There is some language in this that some people may not enjoy – but it didn’t bother me. I just wanted to mention it since I saw a bunch of other reviews that talked about the speech and things that were talked about. Unfortunately, it seems like they forgot that it took place in 1945.