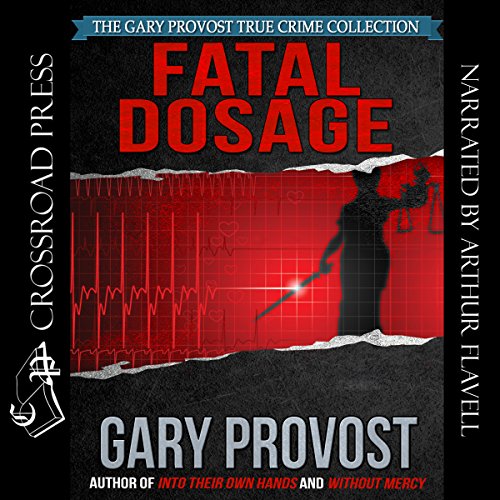 By: Gary Provost
Narrated by: Arthur Flavell
Try for $0.00

Becoming a nurse was the realization of Anne Capute's lifelong dream. Now she had everything she wanted - until the nightmare began at Morton General Hospital.

Licensed practical nurse Anne Capute administered a fatal dose of morphine to a dying patient, Norma Leanues. Anne claimed she was following common practice at Morton General, with a verbal approval by Dr. Hillier, to administer unrestricted doses of morphine as a humane antidote to the unbearable suffering of terminal cases.

One day after the death of Mrs. Leanues, Dr. Hillier was off on a European vacation, and Anne Capute was suspended. Three days later she was advised to retain a lawyer - she would be standing trial for first degree murder.

One after another, doctors and nurses with whom Anne had worked so closely testified against her. And the most damaging prosecution witness of all was Dr. Hillier. Suddenly Anne's life's dream was destroyed. And as her personal life, too, began to shatter, there remained little hope of acquittal - or justice.

Anne Capute: a woman on trial for her life. One dedicated nurse battling against the vast influence of the medical establishment. Hers is a true story of courage, drama, and penetrating suspense that no listener will soon forget.

What listeners say about Fatal Dosage

This is a very different style of true crime than I usually read and I really enjoyed it. There was very little "crime" it is mostly the aftermath and trial of one of the accused. It was told in very straight forward manner from start to finish. The narrator was in my opinion a great choice for this book. I did have a few unanswered questions and when I was looking up the answers I discovered this was made into a movie in the 80's starring Patty Duke.

Being a nurse myself, I found the subject matter very interesting and down right scary. And I refuse to say anything else on the grounds it may incriminate me...

This book is interesting and I wanted to listen to it. but it froze and I kept getting an error saying that audio playback is failed

The defendant is completely out of it. She is the single most childish defendant I’ve ever read about. The night of her patient’s death, knowing she gave her too much morphine, she joked to her children when asked why she got suspended that “I raped a patient.” She is inappropriate in all situations, her instincts that of a bad child. She doesn’t seem to realize any consequences of her actions, and the author tries way too hard to to make her a relatable and to make her actions acceptable. No, Anne shouldn’t be tried for 1st degree murder, but she knew she was killing the patient with extraordinary amounts of morphine. The hospital is to blame partially for these attitudes, but this woman lied to get her degree. She wasn’t smart or qualified enough to take care of dying patients. I’ve never read a book so biased and blind to the obvious. The defendant is not an innocent bystander, but still 1st degree murder is nuts. I was interested enough to listen to all of it, but was angered by the author bias and the defendant’s gruff obnoxious personality. The wurst part was when she asked a friend for money and then the author said she “forgave” her friend for saying no... this woman lied to get in nursing school and then only attended 1 year in school at 40 yrs old. I can’t fathom the lack of experience and knowledge and GOOD SENSE of the defendant. The whole thing is a mess.

A beautifully touching story.
The true story that highlights the dilemmas of a nurse who is charged with murder.
A superb listen.

I loved this book. One of the ways I could tell it's a true story is that there are 3 people named Meredith. I wish the ending didn't end so abruptly, though it did tie everything up and didn't really need more.

I was surprised how emotional I felt at the end - not saying if it's a total bummer, or left me confused, satisfied, pissed off, content, or grappling with mixed emotions though 🤷🏽‍♀️ - as no spoilers here! Spoilers are listed below. I am, however, curious about each character and how their lives changed after that intense trial.

LA LA LA LA LA LA LA
NOT SPOILING UNTIL YOU'VE PASSED THIS UNTIL IT INDICATES THAT SPOILERS END.!!! That's 3 WARNINGS! Move to end if you don't know the ending.*** I would've liked to see her sue the hospital in a civil trial; she deserved money for losing her job, days off work, pain and suffering, punitive damages, Costello's lies - even if she had immunity in criminal trial, that wouldn't apply to civil trial, plus charged with perjury!), shady communication among higher-ups, and lawyers' fee - How did she pay for Pat et al.? I can't wait to Google these people to see what happened after the book left off. I guess since the outcome was what I hoped, this wouldn't matter, but I was waiting for the defense to bring more of the hammer - for instance, prosecution said Norma received 1700mg in that week. If defense broke the 1700mg of morphine averaged over the whole week; 195mg that night - after a week on high quantities of morphine/ Dilaudid/Demerol and/or other opiates - is SO feasible that averaged over 7-days (that's Ann's 195mg/that day for a combined nurses' total of 1365mg/week), indicating that even if Norma was given 195mg per day during her stay, Ann plus all the other nurses with Norma as their charge altogether prescribed MORE than 195mg/day - the prosecution witness stated that Norma was given 1700mg/that week, which means she received 335mg MORE than the 1365mg average - showing that either on one day or spread out over the week, there were days when she was given MORE than that. ... And they didn't mention anything about tolerance, which would warrant a higher dose on her last night. I can't figure out why she was blamed when (AN)OTHER nurse/nurses gave Norma an additional 45mg AFTER Ann stopped giving her meds that night. Also, what's with giving liquid meds in mg and not cc's? Maybe the 80's were different - like who could bring a gun to court - I guess before 9/11/01. I suppose those points were irrelevant because they didn't need them to get the verdict they wanted...

Why didn't the jury also announce she was also "not guilty" on second degree murder and involuntary manslaughter? Don't they have to state the ruling on all charges? It was stated that Pat was unable to get those two charges dropped, however if he did, could the DA have tried her again on involuntary manslaughter? ....though what's the point? It ended how it should've. The trial must've been grueling.

I'm not a lawyer, so I guess I suspect precedent laws are remarkably different now in 2020 than back then (like the movie Fragile.... Hopkins is tried for attempted murder because his wife was still on the ventilator, and won.... then as soon as his wife dies off the ventilator, he's then re-arrested for first degree murder). I guess because once his wife died, the scenario was different so double jeopardy wouldn't apply as it's a totally different charge(?)....whereas in Ann's trial, Norma's state never changed.

*** And, hypothetically, IF the judge agreed to throw out Murder 2 and involuntary manslaughter (as Pat wanted) - leaving Murder 1 as the jury's only option - (not including the other minuscule drug charge), could she have been tried again for involuntary manslaughter by the DA? *** If anyone wants to post to my user name to answer this, I'm all ears!

Ann, who I consider the greatest of several protagonists, was one smart cookie!! I guess because I'm from NY, I tend to stereotype people with Southern accents as less intelligent (yes, I will totally admit this is a shortcoming of mine, and I learned that I need to do some self reflecting to address my bias); I was super impressed to hear her astute observations and intelligence - she really could be a lawyer! (I still wonder why Warren did himself in, and why she converted to Judaism (my religion) out of nowhere.) Guess they're not that important to the story, but I'm still curious!

I wonder if there's a movie about this!?

I TOTALLY recommend this book. And I just ordered a copy of the book "Nurses," by Peggy Anderson, so I can read what they had been passing around the ward out of curiosity! I'll have to look for more audiobooks by this author - and the narrator was spectacular. Both were phenomenal at expressing the clarity of writing and narrating, capably building suspense! Just bought 2 more of Gary's books: "Perfect Husband" and "Without Mercy" which I'm stoked takes place in Metro-Dade (now Miami-Dade county - I graduated from U of Miami in '98 - all Jewish New Yorkers seem to end up in Miami. Hmmm... another stereotype for me to examine, even though I fit that exact mold!). Very excited to listen to more from this author and narrator (I think it's the same narrator for one of those books)!

As good as True Crime gets.

Fantastic audiobook from beginning to end.
Seriously. One of the best I've ever listened to.
Gary Provost is an excellent writer.
If you enjoy true crime, you really can't go wrong here.
Five stars easy.