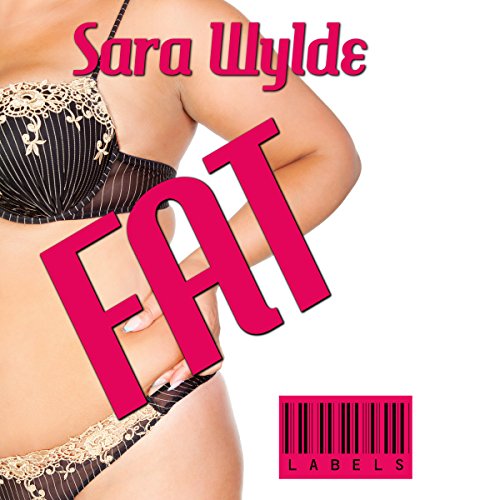 That's nothing Claire Howard hasn't heard before, and there's part of her that doesn't care, that thinks it's okay to love herself just the way she is. Then there's that other voice in her head, the one that plays on a constant loop that gets louder whenever people scrutinize her dinner order, snicker when she needs a belt extender on a plane, and outright laugh when they see her with her the kind of man they don't think fat girls deserve. It reminds her that existing while fat is the worst thing in the world. It's worse than being ignorant, bigoted or cruel-at least according to society's standards. Even when she has the attentions of two men who are the embodiment of fantasy.

But it's not their love that matters, it's her own. Fat is a brand that's been seared into every aspect of her life-even her heart. Can Claire love herself enough to reach past the labels for her own happiness?

What listeners say about Fat

There are a lot of things about this book to like: the narration is well executed, the story is interesting, and the characters are sympathetic and interesting. It's also sexy and fun, which doesn't hurt.

Claire is a beautiful young woman who is fat, which I loved. Unlike many 'plus size' heroines who are a size 14, she's truly fat at a size 26. That right there was enough to catch my attention! I've been a very large plus size woman all of my life, and finding a really big heroine is nearly impossible. So, I liked this aspect of the book. I also like the use of the word 'fat'. (Words are just words, and they only hurt if you let them hurt. I AM fat, it describes me, and I don't take it personally unless it's intended as a slur. I have learned to own it, and Claire seems to have as well.) There are many positive messages about female body types in this story, and that's nice, too.

Claire stays healthy, but her weight is what it is, so she's decided to create a line of clothing for plus size women. She has a male roommate who is a stripper, and through him has become acquainted with several others. She's in love with her roomie, but he encourages her to date another of his dancer friends who has been asking her out for a long time. She decides to accept a date with him, and ends up liking the other guy quite a bit. But, the roomie gets jealous and thereby hangs the tale!

The three of them get caught up in some drama, but while all of that is happening Claire begins to seriously question what she really wants out of life. Does her identity need to be defined through the man in her life, or can she just love herself and be fulfilled? She reevaluates some childhood issues, looks hard at current friendships and relationships, thinks about her future, and makes some hard choices.

There's a lot of inner dialogue in this book, but I didn't find it boring. Claire is remarkably intelligent, and not histrionic at all. She examines the developments in her life with a clear focus, and she won't let herself be railroaded. I found myself liking her a great deal, and I wish I'd had her fortitude 35 years ago!

This was a very enjoyable story, and I especially recommend it to women with body image issues. While it's not in the least preachy, there are some valuable lessons to be learned from Claire's journey, and there's lots of sexy fun for the reader along the way.

one of the best books I've read in a long time

the realness of the characters in this book just touched me. The writer really tapped into the labels that people are trapped in today and how those labels can eat away at a person this book was wonderful

Good book! It is a true story of how parents can become the voice in your head telling you are not enough.

I absolutely loved this big girl romance. The love story is self love and I am here for that. I do not like preachy books and this thankfully is not one.

I can't find enough positive words to describe this book/story. Sara Wylde composes a smart, sexy, mature, and thoroughly enjoyable story. Her words produce a clear visual for wonderful and well developed characters. She has created a realistic woman that is not just a physical shell, but a woman that has self doubt, self confidence, intelligence, drive, lust, and love . She gets her characters, their lifestyles, their fears, their desires, their joys and their pain; bringing them to life as if she was Claire and the other characters.

Hollie Jackson is great as the narrator. Ms. Jackson's voice is not only pleasant to listen to but she knows how to breathe life into the characters. Her narration provides or creates vocal patterns and distinction and she adds variety of depth, and emotion to each character-both male and female-this is her talent, her voice. Listening to Ms. Jackson read Ms. Wylde's words-I could close my eyes, and it was like watching a movie. I could see all of the characters-their physical appearance, their mannerisms, their emotions, and their activities.

One of the best books I have listened to in a while. love how it focuses on self love!

This Book Surprised Me--More Depth Than I Expected

I appreciated that this book featured an ACTUAL plus-sized heroine (not the typical "size 14," which I'm not sure I'd classify as fat) I also liked that a couple of hot men UNAPOLOGETICALLY found Claire desirable. The way she worked through everything felt true to life, and I appreciated her growth (complete with occasional setbacks because of internalized blind-spots). I saw myself in her in more than a few moments, and it was empowering to see her breakthrough. I'll admit that the male characters were a bit flat (and one-dimensional), but that wasn't really the point, so I'm letting it go. I highly recommend this book!

ok I read the bad reviews before listening to this book. I was skeptical about it but as a fat girl I needed this. I felt better about myself after which in a way is weird. I really sympathized with Clair. she went on a rollercoaster of emotions with everyone around her and I was with in on the ride. the sex was hot, but the feels were real. she is completely hung up over her weight but childhood trauma does that and I understood why everything was about her weight. those insecurities never leave and I have a lot of experience with it as well. The guys were so real I was able to insert the people in my life in their places. (not in the same scenarios tho lol). as soon as I thought the book would end one way, the author changed it on you. loved that! the narrator was wonderful. her play on the male voices was interesting enough that it helped greatly on separating the characters. if I had to complain, it would be that sometimes it was hard to distinguish between Clair's inner thoughts and her dialogue. plus size, curvy ladies give this a try if you don't like it by chapter 6, then go ahead and stop

too much a "why me" story

I found it was too depressing, the story wasn't a feel good story, nor was it clear who the H was this is a hard pass for me

A thought-provoking story about love and self

Would you listen to Fat again? Why?

I loved this story from the moment it started. The performance was spot on and the intonation and depth given to the character by the narrator was superb.

It was sweet, sexy, funny and very relatable. We all have that insidious voice inside us that tries to knock us down and Claire's journey to self acceptance was believable.

She made it seem like Claire was a friend of mine, sitting on the end of my bed telling her story.

I would recommend this book to my friends in a heartbeat.