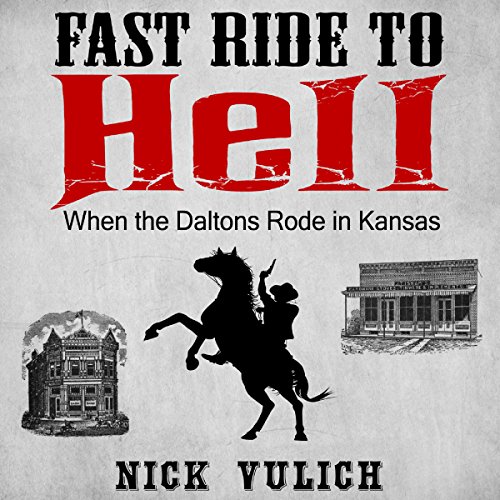 The Adair robbery was the beginning of the end for the Dalton gang. By all accounts, it was one of their more successful raids. The take was estimated at somewhere over $17,000 - not bad for a single night's work. But the pressure put on the gang afterwards led them down the path to carelessness - and ruin.

Eight well-armed men rode up to the small frame station about an hour before the KATY No. Two train on the Missouri, Kansas, and Texas line pulled in. Night station agent Heywood found himself taken captive before he knew what had happened.

The robbers appeared unconcerned. They waited on the station platform - laughing, and shooting jokes. For Heywood things weren't near as pleasant. He was kept at the muzzle end of eight Winchesters as he waited to flag the train down.

As soon as the train came to a standstill Emmett and Grat boarded the engine. One of them took engineer Glen Ewing captive. Bill Doolin, George "Bitter Creek" Newcomb, and Dick Broadwell fanned out, and grabbed the conductor, and the rest of the train crew. Charley Pierce stayed behind to watch the horses.

After the robbery, the Dalton boys rested up in the Dog Creek Hills that night. They split up the booty, and slept all day. After that, they split up and rode off in groups of two and three. In Beyond the Law, Emmett says Bob took an inventory of the gang members, and trimmed the band down to five core members he knew he could trust - the remaining members were the brothers, Bob, Emmett, and Grat Dalton, Bill Power, and Dick Broadwell. Bill Doolin was wild and unruly, mentally awkward. Pierce and Newcomb displayed an uncurbed "rampant foolishness". But the biggest reason for divesting members from the gang was it was too large. There was not enough 'divvy' when each split was made.

Bob needed more money for that fabled escape to South America. But that greed, that lust for more money, would leave him shorthanded for the gang’s final job. Another byproduct of the Adair robbery was that the heat on the boys was turned up a notch, as more lawmen scoured Indian Territory searching for them. After the robbery, the express company put a $5,000 reward on each man’s head—a total of $40,000. It was enough to tempt strangers, and good friends.

The boys were on a fast road to hell, with a posse of deputy marshals close behind them, and the scent of blood and money ahead.