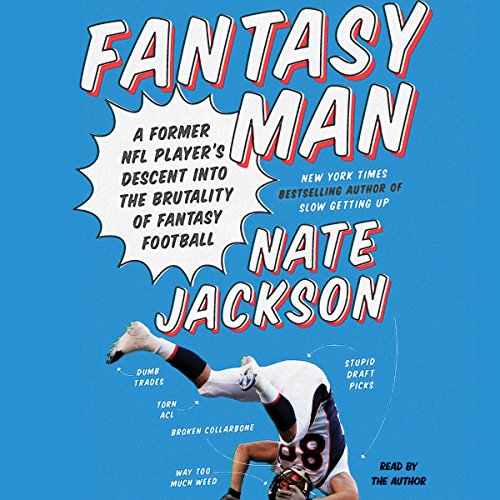 The New York Times best-selling author of Slow Getting Up chronicles his descent into the madness of early retirement and fantasy football.

In Slow Getting Up - hailed by Rolling Stone as "the best football memoir of all time" - Nate Jackson told his story facedown on the field. Now, in Fantasy Man, he's flat on his back.

Six years have passed since the former Denver Broncos tight end wore a helmet, and every day he drifts further from the NFL guy, the sanctioned-violence guy, the psychopath who ran headfirst into other psychos for money. But Nate hasn't quite left the game. Bedridden by a recent surgery to remove bone fragments in his ankle, he's trying to defend his title in one of the millions of leagues captivating America through modern fantasy football, the interactive human poker game started by rotisserie leagues, boosted by ESPN and Yahoo!, and now elevated to that rarefied world of vaguely legal Internet gambling by FanDuel and DraftKings.com.

And this time it isn't a 300-pound wall of flesh rushing to crunch his spine.

Exploring the fantasy - and the reality - of professional football after you've left the field, Fantasy Man is as funny, self-deprecating, and shockingly honest as Slow Getting Up.

What listeners say about Fantasy Man

I enjoyed it.. Not as dark as the title.

I was expecting to hear about Nate becoming addicted to DFL or something similar. The title was obviously sarcastic. I enjoyed it though and Nate's still is very entertaining to me.

Fan of his other book, this one not for me

I bought this because I am a fan of "Slow Getting Up" and after reading the summary of "Fantasy Man" thought the idea of a former NFL player talking about Fantasy Football was really interesting. As it turns out the summary is a little misleading, fantasy football is a big part of the it but he also used the book as a platform for a lot of other topics that I found more boring and preachy than entertaining. There were some fun and interesting parts, the first chapter was an example of how good and funny I thought the whole book would be but it went down hill from there for me.
Overall, I do not think this book was bad but I do think it wasn't for me. If you are looking for a book about the a former NFL player's humorous look on fantasy football keep looking, if you are trying to listen to a book about a year in the life of a former NFL player as he complains about the commercialization of football and CTE (both valid) and champions medical marijuana all while trying to cram fantasy football in every chapter as a loose theme, then give it a try.

Nate Jackson can write. In this oddly touching mash up of poetry, testosterone, fantasy football finding oneself and coming to terms with a living no longer lived, Nate rants it out. You don't know where it's going but that's the point. He chases the sweaty moment and brings you along for ride

Just not on the same level

I got this book as I loved his other book, I loved the honest account of how the less elite guys struggle in the NFL machine. It was eye opening.

This book is actually almost weird in that I really don’t know what it’s trying to achieve, and let’s face it fantasy football in itself is not worthy of a whole book.

nate just seems like a nice guy and tells this tale if his own foray into fantasy football with his usual charm.