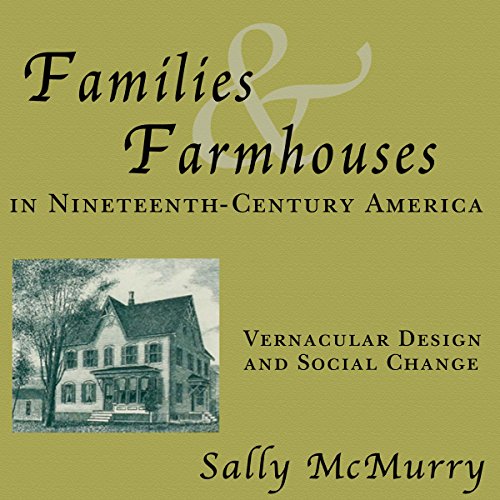 By: Sally McMurry
Narrated by: Angie Hickman
Try for $0.00

The antebellum era and the close of the 19th century frame a period of great agricultural expansion. During this time, farmhouse plans designed by rural men and women regularly appeared in the flourishing Northern farm journals. This book analyzes these vital indicators of the work patterns, social interactions, and cultural values of the farm families of the time.

Examining several hundred owner-designed plans, McMurry shows the ingenious ways in which "progressive" rural Americans designed farmhouses in keeping with their visions of a dynamic, reformed rural culture. From designs for efficient work spaces to a concern for self-contained rooms for adolescent children, this fascinating story of the evolution of progressive farmers' homes sheds new light on rural America's efforts to adapt to major changes brought by industrialization, urbanization, the consolidation of capitalist agriculture, and the rise of the consumer society.

What listeners say about Families and Farmhouses in Nineteenth-Century Amerca: Vernacular Design and Social Change

Interesting Look at the Evolution of Housing

Would you consider the audio edition of Families and Farmhouses in Nineteenth-Century Amerca: Vernacular Design and Social Change to be better than the print version?

Yes, I would consider the audio edition better than the print version. Why? Because I never would have learned that it existed otherwise.

Have you listened to any of Angie Hickman’s other performances before? How does this one compare?

No, I haven't. She's a fine narrator with a pleasant voice and good cadence and pacing.

"Moved" is a strong word for a scholarly book, which is what this is. It interested me in places, but I can't say that it moved me.

This book reminded me of The Reshaping of Everyday Life by Jack Larkin because it dealt with the reality of day to day living spaces in American history in a similarly fascinating manner.

The beginning is rather dry. Persist through that and you'll find some fascinating insights into relatively unexamined territory.

The American Farmhouse and American Society

Where does Families and Farmhouses in Nineteenth-Century Amerca: Vernacular Design and Social Change rank among all the audiobooks you’ve listened to so far?

This was a fascinating audiobook, if for no other reason than its unique and interesting content.

Having grown up in the Midwest (i.e. Northeastern Ohio), I was "hooked" before I finished book's intro. This book also reinforced a belief I have about people: that civilization is merely a physical manifestation of mankind's attempt to manage their circumstances and environments in a manner that produces the greatest comfort and convenience for the people involved. Circumstances and environments may change, but people's desire for comfort and convenience remains constant. And so, the farmhouses discussed in this audiobook are an account of the way Americans of the 18th century and beyond attempted to satisfy this desire.

The only reason I gave this audiobook 4 instead of 5 stars was because I thought the author placed too much emphasis on the plight of women on the farms. Although I appreciated hearing about the experiences of these women, it seemed to me to be a bit much-that the author was biased in this area.

But aside from that, I found it to be an interesting audiobook.

Great for a text book.

If you could sum up Families and Farmhouses in Nineteenth-Century Amerca: Vernacular Design and Social Change in three words, what would they be?

This could have been made more enjoyable if the author tried less hard to impress with her extensive vocabulary and tried harder to bring all that history and social influence to a level a mere interested party could enjoy. To be fair, I suppose that many of the people who will be reading it will be students of architecture. That being the case, perhaps the extensive architectural vernacular would be justified.

The reading was staccato to mimic the grad school length words, but it made it hard to listen to.

The farmhouse: a reason for being.

I have listened to it 3 or 4 times now, trying to absorb the material. The facts are so densely presented that it has been a challenge to master.

I typically love nonfiction, and I almost always enjoy history. I even found the information in this book to be very interesting. That being said, this book was very dry and perhaps a bit too scholastic for an audiobook. The material is easier to get through after the first half of the book, but it was definitely a struggle getting to that point.

As far as the narration, while it didn't hurt the material, it didn't do anything to help it either.

This was a very enjoyable and interesting book.Sally McMurry does a wonderful job of narrating this informational book on the styles of houses and people who lived in them in the 1800's.Why things go where they are in some traditions house,but in a whole other place in another tradition is explained in much detail.I had no idea that houses were built the same for reasons other than how nice they looked and how many bedrooms you need!
"I was provided this audiobook at no charge by the author, publisher and/or narrator in exchange for an unbiased review via AudiobookBlast or MalarHouse dot com