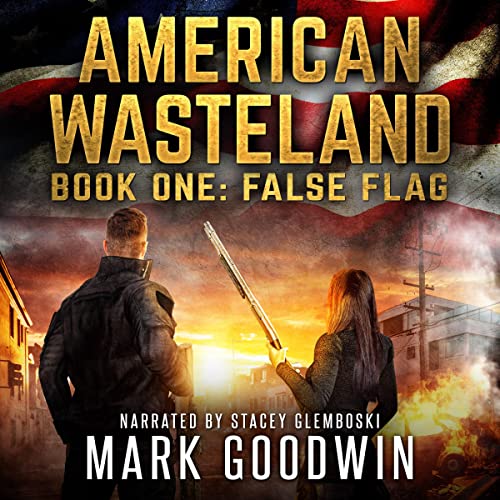 By: Mark Goodwin
Narrated by: Stacey Glemboski
Try for $0.00

It is the common fate of the indolent to see their rights become a prey to the active. The condition upon which God hath given liberty to man is eternal vigilance; which condition if he break, servitude is at once the consequence of his crime and the punishment of his guilt.

Jennifer Martin struggles to keep her small business afloat in the aftermath of a global pandemic. But when a blast from the past informs her of a plan to take down America, she realizes the pandemic was only the opening act. Death and destruction hang like a dark cloud over the horizon. Jennifer must steel herself for the trouble to come.

Sometimes the cure is worse than the disease.

Government intervention during the pandemic has weakened the economy and the social fabric of the nation. Nevertheless, bureaucrats and lawmakers refuse to change course and double down on the failed policies that have crippled the country. Rising prices and labor shortages are pushing Jennifer Martin’s small Atlanta restaurant to the brink of destruction.

After years of being out of touch, Lucas McIntosh shows up at Jennifer’s doorstep. He tells her about his dishonorable discharge from the Army, and about the purge designed to cleanse the military of patriots and conservatives.

New laws serve to exacerbate the growing food shortage in America. Paired with crippling inflation, the scarcity triggers food riots across the country.

And a fatal false flag.

Shortly after the riots are brought under control, a cyber-attack brings down the electrical grid sending the country into total chaos. The assault is blamed on a group of malcontents who believe the last US election was rigged. But Lucas believes this narrative is only a ruse intended to further divide the fractured nation.

With so many already in dire straits, the power outage pushes people to the edge. The crisis brings out the worst in humanity, turning average citizens into desperate savages. Jennifer and her small group of friends will have to stick together and be smart if they have any hope of surviving the turmoil.

Don't miss this post-apocalyptic thrill ride set in America's near future. Get your copy today!

As with all works by Mark Goodwin, this book contains no profanity and no embarrassing sex scenes. However, if you're offended by conservative principles and references to Scripture, this book might not be for you.

What listeners say about False Flag

Mr. Goodwin cuts a little too close to quick.

This happened tomorrow. 2 chapters in and I'm ready for the purge. His other books were topical, logical and engrossing. This one so far is what I'm living. No Brandon hasn't outlawed meat yet.

Ripped from the Headlines

Seriously, I feel like I am reading fiction-nonfiction. I pray eyes will open to what is actually happening in the US. This book is written for such a time as this in the US. There are some really great quotes and sources to support the storyline. All that said, I trust God and know whatever happens it has not taken God by surprise. Trust God and get prepared. It is real this book is what’s happening in the US today.

As usual I am looking forward to the next installment. I will also be purchasing the paperback copy when it comes out.

My only complaint is the story is NOT 7 hrs and 14 mins. The actual story is 6 hrs and maybe 30 something minutes. The additional time is spent on listing Mark’s other titles and giving the overview of each series.

I’ve listened to almost all of your books and this one was disappointing. Don’t really like the female narrator or the female story line, just too whiny. Stick with Kevin Pierce.

As always with Mark Goodwin, an excellent book!!! I'm always well pleased with his books!!!