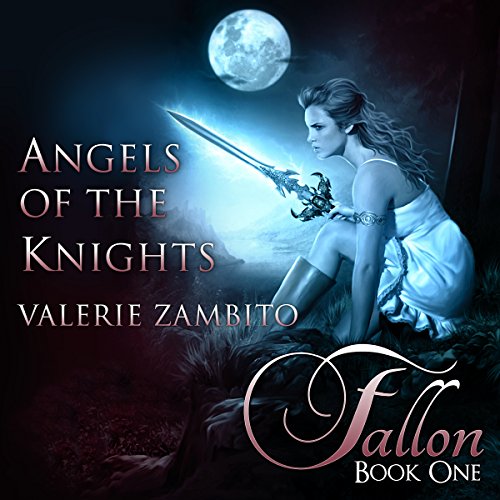 When Fallon died at the age of sixteen, her life changed forever.

The hallowed world of Emperica is everything she had ever hoped for as a mortal--immeasurable beauty, unconditional love and light. But, with affection for humankind still burning within her, she joins the Knight Caste to train as an angel warrior.

The elders warn her that the path she chose will be a solitary one. That she will not have the same bond with humans as she once did. But, as far as she knows, the elders had never met Kade Royce. When her duties place her in the path of the handsome former cop, emotions buried long ago rise to the surface and she is powerless to ignore the depth of her feelings for this young man.

Ignoring the risks, she invites him into her world of danger, but soon their lives collide with explosive consequence. As a result, Fallon realizes with heartbreaking despair that she can no longer hide from the painful truth. In order for Kade to live, she must destroy him.

OMG...I absolutely LOVE this story. I love author Valerie Zambito's take on the whole angel and demons. The plot has wonderful, the characters are fun and feel real, the details are perfect, it's filled with action, and many twist and turns along the way. I really liked Fallon, the female Angel knight and the human boy Kade. Fallon died at the young age of sixteen and was killed during a home invasion. When she does she passes to Emperica, or heaven as we call it. There she has a choice to choose between four types of angels, a sentinel, a patrit, an aegian, or a knight. Knight return back to earth after extensive training and after the removal of their wings. Fallon spends thirty years training before her return to earth. The knights return to earth to kill the Kjin, who are demons from Mordeax (Hell). Returning to earth isn't all Fallon has expected and she's now a younger Angel than she once was. Meeting Kade she discovers she has feelings for him and he knows exactly who she is. This story is fast paced, leaves you on the edge of your seat, and begging for more when it ends.

Narrator, Angela Grayden did a fantastic job with her narration of Fallon. She kept me immersed throughout the entire story. I enjoyed the distinguishing accents She gives each character. Angela brings this story to life, it's like taking a breath of fresh air. I haven't heard other stories Angela has narrated but I'm eager to listen to others she's narrated. I am definitely eager to listen to the other two audios in the Angels of the Knights series, Nikki and Blane. I received this audio in exchange for an unbiased review.

This audiobook gives shape to potential beliefs on what heaven may be like and suggests there are four castes of angels that run heaven and a caste of warrior angels that go back to earth and go after the thieves and murderers. The story highlights the adventures of one angel knight on earth.

I really got into this book..

I liked how they described heaven and how they fraught the evil ones.

Angela did a wonderful job with this book I like how she had different voices for each character..

Slow Start but Loved the Ending

It took awhile to get to know Fallon but then I did like her character as she seemed mostly brave & selfless.

Would you recommend Fallon to your friends? Why or why not?

I would recommend Fallon to my friends who are patient readers as it takes some time to develop an interest in the story.

Was Fallon worth the listening time?

The last half of the story flowed much better than the beginning so I'm glad I stuck with the audio. Fallon is about angels and demons, so the premise is a familiar one. However, the world building was a bit different than in other stories, which added to some of the enjoyment. I still have questions about Fallon and how she became the skilled warrior while many others did not have nearly her same abilities. However, there are many books I finish, enjoy – and still have unanswered questions, so I’ll cut this one a break too. Lastly, maybe it’s the coffee lover in me but when the narrator said - “Fallon, throw me your aventi”, I heard: Fallon, order me a venti! 🍵

Where does Fallon rank among all the audiobooks you’ve listened to so far?

I loved Fallon she is a powerful woman and very fun to read about.

Have you listened to any of Angela Grayden’s other performances before? How does this one compare?

Not your typical Angel Story

Would you listen to Fallon again? Why?

I would. It was a good story. Clean and not jumbled up with a lot of story lines. If this is any indication of the series, I can't wait to listen to the next one.

What other book might you compare Fallon to and why?

None that I can think of

Have you listened to any of Angela Grayden’s other performances before? How does this one compare?

This is my first. I will be downloading the other two books in the series, so let me get back to you on this LOL

I laughed a few times, but nothing extreme.