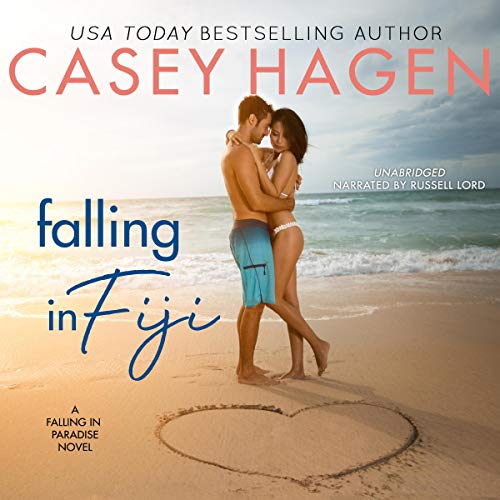 By: Casey Hagen
Narrated by: Russell Lord
Try for $0.00

Corinne Anderson designs the most stunning engagement rings on the west coast. A jewelry designer for the jet set and engaged to marry the man of her dreams, Corinne thinks she has it all...until her engagement explodes in spectacular fashion. Devastated, Corinne dares a sexy stranger to help turn her honeymoon from broken to breathtaking.

Everett Harden, a sought-after financial whiz kid, is overworked and stressed to the max. Minutes away from closing a lucrative deal, he's approached by a tiny spitfire who slaps down two airline tickets and a challenge: join her on a beach getaway where the sand is hot and the adventure is hotter. Intrigued and desperate for an escape, Everett accepts.

Fiji began as a fancy-free trip, but with the high-tech adventure app running the show, Corinne and Everett find more than paradise. But can their romance survive the pressures of the real world, where reality bites, adventure is hard to come by, and there is no app for love....

What listeners say about Falling in Fiji

This audiobook was given by the author, narrator, or publisher at no cost in exchange for an unbiased review via Audiobook Boom.”
I really enjoyed this book it is one of the better books I've read in a while I would recommend this book to my friends so enjoy it


What a great concept for a book, I loved that Corinne had the balls to do what she did. I get that her friend was egging her own. But I don’t really think Corinne would have done it if she didn’t want to. I believe being hurt by her ex fiancé, she kind of needed to shake things up.

Everett kind of surprised me by saying yes. But I think secretly he needed to shake things up as well.

I loved how they got to know each other and how it grew in to more. What a great love story. I can’t say enough good things about this shortish listen. It was about healing but healing together and standing on your own. I kind of loved that.

I will say I was a little apprehensive with the narrator at first, because I would have figured a woman would have narrated this story. But in the end I enjoyed it immensely.

*All my Reviews are 100% honest and my own.*
*This Audiobook was given for an unbiased review via AudioBoom.*

OK, SO HONESTLY, MALE NARRATORS SHOULD NOT NARRATE BOOKS WHO ARE WRITTEN FROM A WOMAN'S PERSPECTIVE. A FEMALE NARRATOR IS MORE APPROPRIATE! Other than that, the story seems fine, but I couldn't get past the first chapter because of the terrible narrator.

I always love a good love story - short or long and I was looking forward to this one. It disappointed me though with the whole set up, when Corinne hooked up with Everett and invited him to go on a vacation with her. Corinne didn't know Everett at all and I just think she had misunderstood her good friend's suggestions of being open-minded.

I'm not the one to tell the author how to tell her story but it would have been more believable if they had just met in the vacation spot. I also thought that their romance was very fast-paced and I found myself headshaking.

However, the story gets better and I begin to enjoy it after a while. What I loved about the book? It was funny! I found myself laughing from the beginning because of many quirky, akward and embarrassing moments. The conversations between the characters are humorous sometimes, so if you need to laugh, you'll get it here.

The narrator Russell Lord was not the right man for this book. There are so many great female narrators that could have done this one and it would have been so much better. I liked Russell Lord a lot, if it had been a crime novel or anything else with a darker theme, but not for a romance. I cringed many times with his female voices that sounded like cartoon voices and the male voices was very tense at times. This narrator doesn't have the voice of a lover boy either. The characters sounded a lot older than they were.

Sweet second chance story, you find what your looking for when you least expect it. Quick, light, fun, entertaining and enjoyable story.

Both Everett and Corrine were really good characters. You can't help but root for them as a couple.

Narration the good and bad…. Russell Lord does the narration. While he is by no means the worst narrator I have listened to, I don't think he was the right choice for this story. You can tell he is putting an effort into doing the story justice. He has a nice deep voice that would be great with the right book. While I did get used to his style of narration it still sounded a little off at times. Male character voice sounded dull/dopey occasionally, just not the voice you want for your hot alpha male. The woman's voices were too high pitched at times. To me his voice would be better suited to fantasy/magical or sci-fi military stories. With the right story I would listen to him narrate again.

This was the first book by Casey Hagen I have listened to. I will definitely be listening to more of her books.

This audiobook was provided by the author, narrator or publisher at no cost in exchange for an unbiased review courtesy of AudiobookBoom

This book was a joy but the narration left me wanting. The two main characters were extremely likeable and the story line was full and well-rounded. The narration fell flat.

Every time Everett, the male love interest, spoke it sounded like a cross between Deputy Dog and the robot in Lost in Space. That was a bit of a shame since Everett had some great swoon-worthy lines. The fact that Everett kept using Corinne's full name, a sweet and unusual gesture in a romantic novel, was tarnished by mid-book because the delivery of said was so awkward.

There was a very rewarding HEA but I can't help but think how much more enjoyable this listen would have been with a different narrator.

While I do love a light hearted escapist romance, I did have a few problems with the story. I've read books of this nature that start out with a zany last minute adventure with unexpected outcomes but this one was not believable to me. First, there's a man in a bar working on his laptop? What? The main character approaches him and slaps down an airline ticket to Fiji for the next day. Thought those things had to be bought in someone's name these days. And last, these two didn't really talk on the plane yet she feels comfortable enough to spend a week ALONE with him in a foreign country? Um, sounds like a girl dumb enough to almost deserve getting raped and killed. Lifetime movie of the week, anyone?
I did finish listening but by the hardest. The narrator did an okay job, but I did have a hard time discerning his man's from his woman's voice sometimes.
Don't make me decide if you should spend a credit, but I wouldn't.
This audiobook was gifted to me in exchange of an honest review.

Russell Lord does an interesting job at narrating the story. His voice is deep and strong, and he makes for a great male character, it took a moment to get used to his rendition of the female characters, but he does a great job. Very well done.

Casey Hagen’s debut novel is fantastic. It gives you a taste of romance, passion, overcoming family drama and taking a stand. She weaves the story masterfully. It is a fast paced masterpiece that I couldn’t put down. Few authors have the talent to really pull you in and not let go. I read the story in one evening, staying up to the early hours to finish. Her imagery of the tropical paradise gives you the urge to dig your toes in the sand.

Her characters are well developed, with beautiful interaction. The way they handle everything that’s thrown at them is remarkably real. It’s impossible not to fall in love with Corrine and Everett. I am looking forward to more from Ms. Hagen and Mr. Lord.

I absolutely loved this quick fun read. This was my first audiobook, I usually listen to text to speech and this was much more fun. When you are cleaning the house or exercising this is a fun way to get your reading in. Casey Hagen writes amazing stories that hold your attention. If you are looking for a fun enjoyable read here it is.

What made the experience of listening to Falling in Fiji the most enjoyable?

You know, sometime, you just want a nice, quick, light read. Something that makes you feel good, uplifted, hopeful, when the world is going to crap around you. Since it's short--novella length-- it would be the perfect kind of book to take to beach in Mexico or the Caribbean this winter.

What other book might you compare Falling in Fiji to and why?

I'd have to say Casey Hagen's writing is similar to Jill Shalvis or less well known, Liz Bemis, or Jennifer Cruisie or Susan Elizabeth Phillips. Not really answering the question, but that's my two cents worth anyway.

What does Russell Lord bring to the story that you wouldn’t experience if you just read the book?

I thought he had a nice reading voice. It's never that easy for a man to do the women's voices convincingly, but at least I could distinguish between the characters, so it's a minor issue. His voice is mellow and easy to listen to. He doesn't just read the book in a laborious monotone. It's acted and engaging.

I got a kick out of the adventure generator. That was very very clever! I liked Corrine and Everett. They were average, normal people who got their happily ever after. It's nice to think that might happen for all of us!

I don't normally read contemp romance, usually it's hist rom or mystery, but the cover really caught my eye so I thought I'd give it a go. I just wanted something that would make me feel happy. Romance always does that.
I had no idea that this was Casey Hagen's first book. I never would have guessed that by the quality of the writing. It's quite well done and she has a witty sometimes bawdy sense of humor.
This is the kind of book that would make a good movie!