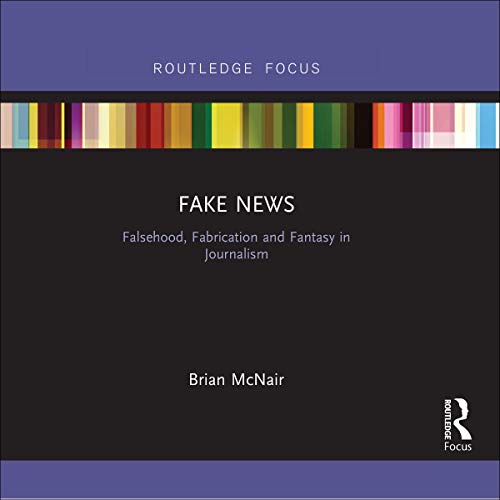 By: Brian McNair
Narrated by: Sandy Burnett
Try for $0.00

Fake News: Falsehood, Fabrication and Fantasy in Journalism examines the causes and consequences of the ‘fake news’ phenomenon, now sweeping the world’s media and political debates.

Drawing on three decades of research and writing on journalism and news media, the author engages with the fake news phenomenon in accessible, insightful language designed to bring clarity and context to a complex and fast-moving debate.

The author presents fake news not as a cultural issue in isolation but rather as arising from, and contributing to, significant political and social trends in 21st-century societies. Chapters identify the factors which have laid the groundwork for fake news’ explosive appearance at this moment in our globalised public sphere. These include the rise of relativism and the crisis of objectivity, the role of digital media platforms in the production and consumption of news and the growing drive to produce online content which attracts users and generates revenue.

What listeners say about Fake News

The books seemed to have started fair and journalistic. After half way point it became extremely obvious the author was anti Trump. At the end there were many generalizations of trump voters and his organization with a few flat out lies "fake news" of his own.