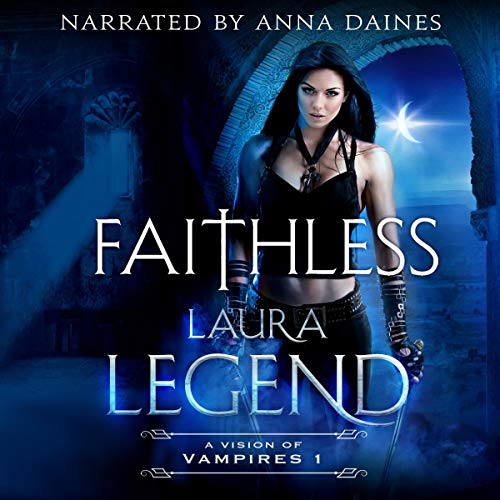 By: Laura Legend
Narrated by: Anna Daines
Try for $0.00

Smart, sexy, and wicked funny! A Vision of Vampires is this year's hottest vampire series!

Fans of The Vampire Diaries, Mortal Instruments, A Shade of Vampire, and Twilight love A Vision of Vampires!

They're coming for me.

I can smell it in the air. I can feel it in my bones. They're coming, and they won't stop until I'm dead and the world of the living destroyed.

Destiny has foretold it.

But destiny underestimated me. And my sword. The one that slays vampires and sends fear into the still hearts of the undead. And when they come for me, I'll be ready. Barista by day, Vampire ass-kicker by night. Yep, that's me. Triple shot of skinny, iced death coming your ways, bitches.

I'm a seer. A rare gift in the arcane world. Only one in a generation, they say. Vampires fear me. They should - I can read them like a book, predict their moves, and plunge my sword into their cold hearts before they know what hit them.

Except for...him. Richard York. He's blank to me. I've never met anyone like him. Out of all the vampires I've faced, he's an enigma. A complete mystery. And I want, I need, to know why.

And that he's ridiculously sexy is not helping.

Let Laura Legend transport you to a magical world where the world of mortals is caught in the middle of a war between vampires, witches, warlocks, werewolves, and all the beasts we thought were legends. For fans of Janet Evanovich, Laurell K. Hamilton, Jim Butcher, Patrica Briggs, Stephenie Meyer, Bella Forrest, J.R. Ward, and Sherrilyn Kenyon!

What listeners say about Faithless

The Narrator Is fantastic! She brings a life to

She brings a life to Cass and her friends adventures. Good teen vampire drama with a religious twist.

Legend created a very interesting philisohical twist on the vampire theme....pulled me into the genre.

In addition to this being a well written and very interesting version take on the genre, the narrator was especially excellent!!! Besides having a clear, pretty speaking voice, she demonstrated compelling and nimble use of various character-specific vocal intonations, inflections and accents. Would highly recommend this book, this author and is stories narrated by Anna Daines.

THE NARRATOR NEEDS A NEW JOB SHE SUCKS AT THIS ONE

This narrator takes an ok book, pisses all over it, chops it up in little bitty pieces, and them dumps it all in the listener's lap! She is HORRIBLE! I have heard Highschoolers with better delivery than this so called voice actor. She does not tell a story. She simply reads the words. On top of a horrible delivery without any life in her words, she tries to add generic feelings. The only thing that comes out is bunch of crap.

Really enjoyed book one of the series

I chose this novel by the description on amazon and am glad I did! Very unique storyline and characters. Like the authors sense of humor! Looking forward to book two!

Narrator, you brought the characters to life!

Weak but had potential

The story would be good if it had been flushed out better and more had been shown than told to the reader. Parts of the story seem like The Divinci Code level of academic clues will be included, but then it’s not. This is one of the areas where the story really could have been filled out in better detail. Other times, they just suddenly know stuff or are given info without how the knowledge was obtained. Odd.

The romance is non-existant; they’re just suddenly into each other and kissing with no relationship build up to that point - it makes it awkward.

Also, the book description is very misleading. She can’t see the future. And her sword has nothing to do with it other than just being her weapon of choice.

Three stars on the performance, not because of the actress but because of the lack of editing. At one point two tracks overlap and it’s unintelligible, and a few times she clears her throat, pauses, or rereads something - those are usually edited out, but not this time. Towards the end, she does sound a little disinterested in the book as she reads it

Well hmmm this is a first read/ listen by this author and narrator for me. In all honesty it wasn't that good or could have been but it just wasn't. I couldn't connect with any of the characters none and the development of the main character their was none i guess we were to just know. The narrator was horrifying there were a lot of pauses and one point she started a sentence messed up then started all over again. She was just bland robotic at times this was not for me. I just don't get all the 5 star review's makes no sense none at all. If I were you I'd look elsewhere. Try mystic caravan by Amanda lee. Or the imp series by Debra Dunbar that one is a (adult) read. Both very good