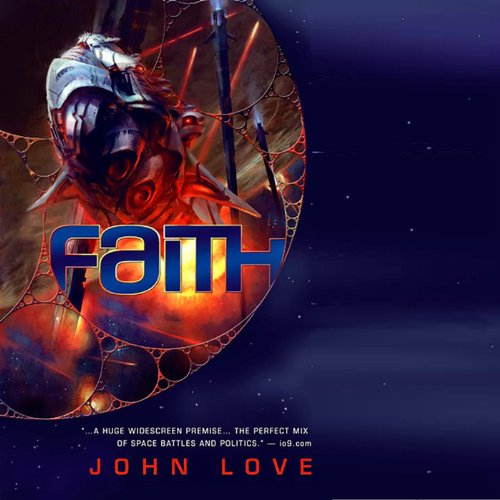 By: John Love
Narrated by: Andy Paris
Free with a 30-day trial

Faith is the name humanity has given to the unknown, seemingly invincible alien ship that has begun to harass the newly emergent Commonwealth. Three hundred years earlier, the same ship destroyed the Sakhran Empire, allowing the Commonwealth to expand its sphere of influence. But now Faith has returned! The ship is as devastating as before, and its attacks leave some Commonwealth solar systems in chaos. Eventually it reaches Sakhra, now an important Commonwealth possession, and it seems like history is about to repeat itself.

But this time, something is waiting: an Outsider, one of the Commonwealth's ultimate warships. Slender silver ships, full of functionality and crewed by people of unusual abilities, often sociopaths or psychopaths, Outsiders were conceived in back alleys, built and launched in secret, and commissioned without ceremony. One system away from Earth, the Outsider ship, Charles Manson, makes a stand. Commander Foord waits with his crew of miscreants and sociopaths, hoping to accomplish what no other human has been able to do - to destroy Faith!

What listeners say about Faith

I've heard of introspective but sheesh....

What disappointed you about Faith?

five minutes of one of the characters thinking about his erection for one thing that bothered me. There is a laser focus on the enemy as if like a comic book. I understand that character flaws are part of a good story, endlessly indulging in them another thing altogether. I might have my sexual fantasies, but does my read have to know all about them in infinite detail? I found the whole story just far too narcissistic for my tastes.

What was most disappointing about John Love’s story?

Look it is hard to write a book, it can take years and God knows it is a labor of love. Still when I get the feeling I have to wash my hands after listening, and I am a grown man, after listening to it, the writer went too far.

Have you listened to any of Andy Paris’s other performances before? How does this one compare?

The Narrator is fine, it is the material he had to work with that I find wanting.

If you could play editor, what scene or scenes would you have cut from Faith?

I would have suggested removing most of the female serial rapist's introspection, I might have taken a stance about anyone going on about his hard on.

I don't want to be unkind but I'd suggest a pass on this one.

This book started with a unique idea and dragged it through the mud of endless and repetitive details. I considered this to be a waste of one of my credits. Don’t waste yours!

Diseased, Infected, Turned in its own length

Repeat the above 3 phrases over and over and over. Then throw in some asides about people to deeply flawed to drive a bus let alone a super powerful spaceship. That's Faith in a nutshell. Bad story, worse characters, "Diseased", "Infected", "Turned in its own length" ad nauseum. Do yourself a favor and pass.

Imagine going to a movie that was mostly one long car chase scene. This book is one long battle primarily between just two ships. The character development is excellent and the dozens of unique battle scenarios are very imaginative and well told. However, after hours of listening to the fight between the two main ships, I was almost wishing for the book to end. I actually considered removing the book from my Kindle before I finished it. I did have to put it away for a couple of days until the numbness wore off. I think the length of the final battle (several hours) and the author’s fascination with human feces and masturbation definitely make the book less than it could have been.

Andy Paris has a definite talent for developing characters and making his writing come to life but he needs to temper his enthusiasm for focusing on just a few subjects until the reader become numb to them. Unfortunately this was a negative experience for me and I will not be reading any future Andy Paris books.

What disappointed you about Faith?

The story focuses too much on uninteresting things like when Foord is trying to get to his ship while riding in a beast drawn carriage. The author's focus was just so tiresome! The battle with Faith had too many details and went on and on. I was glad when the book finished.

Would you ever listen to anything by John Love again?

Which character – as performed by Andy Paris – was your favorite?

Foord. The narrator was very good. Too bad he had to read a crummy story.

What character would you cut from Faith?

Would you try another book from John Love and/or Andy Paris?

This is my first book by this author and it would take a lot to do another one of these.

What was most disappointing about John Love’s story?

I've never seen an action book turned into something so BORING.

A truly different kind of battle, more cerebral and internal. I least like the lack of definition, overuse of superlatives, using the unexplainable to explain what is vaguely described or hinted at.

Try to put less philosphizing and internal angst and more concrete concepts. Internal struggles against the infinite are fine for a story arc, but not an entire story.

Could you see Faith being made into a movie or a TV series? Who should the stars be?

Yes. And I shudder. Probably the surviving members of the original Star Trek show. That way there would be some humor involved. "The Depends just can't take another maneuver like that Captain!"

Definitely not a favorite. If you like cerebral struggles, go for it. And if you like vague stretching of the imagination, again you'll like it. If you like sociopathic criminals in charge of the strongest weapons of mankind (and here it reflects reality?), then it really shines. It is well written for what it's trying to convey. I just never quite defined what that was.