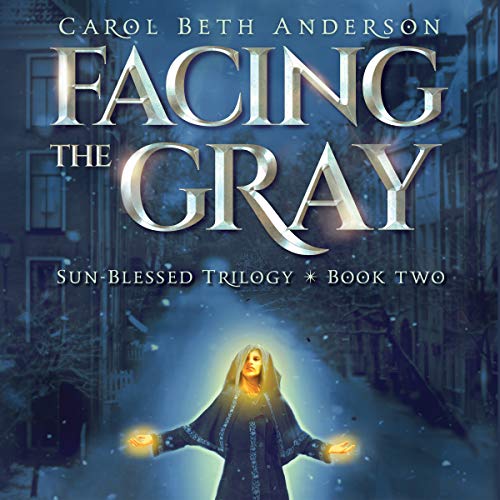 “The Grays—they’re monsters. I don’t know if we can stop them. But we have to try. Monsters can’t be left alone.”

Nearly a year has passed since Tavi Malin split the earth and healed it, escaping from the Grays. She’s settled back into small-town life. But the Grays have been quietly growing stronger, and when they attack someone close to Tavi, grief threatens to destroy her.

Tavi and the Golds resume their battle against gray magic.  But the Grays are still pursuing Tavi—and that means anyone with her is in danger. She’s determined to protect her friends by fighting alone.
Battered by sorrow and fear, Tavi grows reckless, risking her friendships and her life. As the Grays produce weapons and plot to crown one of their own as king, Tavi considers what was once unthinkable: she may need to embrace gray magic in order to defeat it.

Continue the thrilling story that began in Facing the Sun!

What listeners say about Facing the Gray

They Faced the Grays

Facing the Gray takes Tavi and her friends on a new adventure, but suddenly much more is at stake than ever before. When Tavi's sister is murdered by the Grays and Tavi learns that her friends have all made a pact to sacrifice themselves to protect her, she questions her own value and willingness to allow them to make such a sacrifice. Tavi also realizes her friends are in greater danger when they are in close proximity to her, and so she pushes them away and grieves on her own. The group also receives new information about the Grays' plans, and so they head out to try to prevent them. In the process, Tavi begins to seriously consider whether she will need to gain Gray magic in order to stop the Grays.

In many ways, this book was much slower than the previous one. But that is also what makes it a solid middle part of the story. It slowed down enough for us to watch some character development. Tavi had time to be super bratty to the majority of her friends (understandably so, but it didn't make her less annoying). Her ethical dilemma was interesting because it was so understandable, but clearly wrong despite the best rationale. The logic goes like this. In order to gain Gray magic, you must kill a person. Some people deserve death. Therefore, there are ways of getting Gray magic that are not wrong. Still, no. But I get it. I appreciated seeing Tullen's struggles from a different vantage point. I also loved that he never took the easy way out. This book also introduced more of the secondary Grays and demonstrated that they weren't all clearly evil either. Some believed in the cause; some wanted power; some were just in too deep and couldn't get out.

The ending was not a cliffhanger, but it was definitely mid-story, so readers will need to have book three available immediately following their completion of book two. I am looking forward to finishing the story.

I received a free audiobook copy of Facing the Gray from the author and have reviewed it willingly.

Such a fun series!

Here we are, back where I started a while back. The shock at the beginning was almost enough to turn me off this series before I even started...But I'm so glad I kept reading! The events in the beginning of this one now make sense, and it really does serve a purpose, so I'm happy.

As the second book in a series, I'm not to say too much, since this one continues where the first book left off. Tavi and the Golds (her friends) have gotten themselves tangled up with the Grays (a band of mostly older magics users with a corrupted form of magic.) This one has a little more action and the characters have to make some difficult decisions.

this one went 2 quick also. all the charters keep me guessing and interested. both heroes and villains.


i got a free copy of this.

Gray vs Gold, whose on top

I loved the twist and turns of Tavina and Tulan's relationship and the crescendo of the grays being on top. you must read this book to continue the adventure. I loved that Tavi finally matured and went back to where she belonged. I can't wait for the last chapter

Standing up for What is True

Many thanks to Carol Beth Anderson for the complimentary copy of this audio book for my honest review. Anderson's narration in this book is excellent, even better than in the first novel. Facing the Gray is the second installment of the Sun Blessed Trilogy and I very much appreciate not having to wait a year between the installments of this series. This book thickens the plot that was begun in the first novel and deepens the development of the characters maturity both personally and in life experience while driving the plot forward. One element of this series that I think Anderson shows mastery of is the depth of reflection entertained by the characters. Her language eloquently expresses the deep thinking of Tavi and her friends as they assess their personal and interpersonal decisions, passions and interactions. Anderson weaves together a historical background in which the characters participate in and address both big picture/world political elements and struggle with personal temptation to give into passions coupled with the will to identify and stand up for what is true and good. I think this is striking to me because this depth in my experience is not found in many novels that I've read for young adults and I think it's a critical component to their personal and social growth. I highly recommend this book and look forward to listening to the final installment of the trilogy.