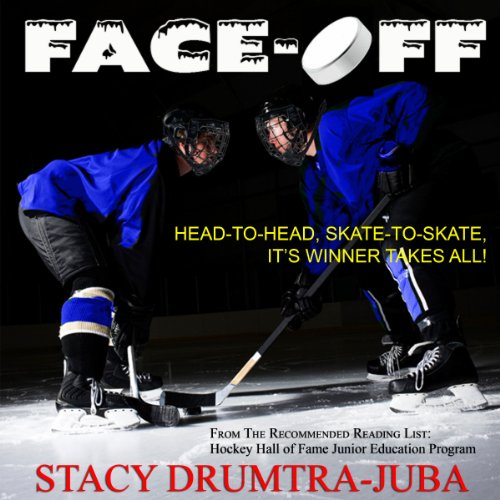 By: Stacy Juba
Narrated by: Maxwell Glick
Try for $0.00

Head-to-Head, Skate-to-Skate, It's Winner Takes All!

What might have been a dream come true has turned into a nightmare. Brad's twin brother, T.J., has gotten himself out of the fancy prep school his father picked for him and into the public high school Brad attends. Now T.J., the bright light in his father's eyes, is a shining new star on the hockey team, where Brad once held the spotlight. And he's testing his popularity with Brad's friends, eyeing Brad's girl and competing to be captain of the team.

The whole school is rooting for a big double-strength win... not knowing that their twin hockey stars are heating up the ice for a winner-takes-all face-off.

Here is a re-issue of the hockey classic, originally written when the author was a teenager. This young-adult novel has entertained thousands of young readers and appeared on many reading lists. Among its many honors: The Hockey Hall of Fame's Junior Education Program included Face-Off on its recommended reading list for the junior and intermediate levels. It has also been recommended in the sports category of Best Books for Young Teen Readers: Grades 7-10 by John T. Gillespie. This new edition contains bonus excerpts from the sequel Offsides (Face-Off Book Two) and the young adult paranormal thriller Dark Before Dawn.

What listeners say about Face-Off, Book 1

Fantastic YA story about brothers

When T.J. has to switch high schools, Brad suddenly has to share his school, his friends, and his hockey team. This is a story about sibling rivalry with realistic family relationships. The hockey parts were easy to follow, even for someone who does not know much about hockey. Readers middle school and up will relate to struggles with family, friends and school. An enjoyable story, and you could really see how both brothers were affected by the situation.

The audio is excellent. The narrator is perfect for this story and he does a great job with the different voices. Overall easy to listen to.

I really enjoyed this! It's not my typical type of read, and I'm probably not it's intended audience, but that just goes to show how wonderful Stacy Juba's writing is! Face-Off is about a group of brothers that are going through some tough things in their lives, but hopefully with each other and their love of hockey they can come together to overcome any obstacle, but some sibling rivalry gets in the way. Brad and TJ are the eldest of the 4 brothers, and they are twins, TJ goes to a private school, while his brothers all go to public school, but a situation in the family causes TJ to have to switch schools to the school with his brothers. TJ was the star hockey player on his private school's team, and Brad is the star player on his team, so when TJ transfers and joins Brad's hockey team, Brad isn't too happy about it. I loved the bond that all the brothers have, and I happen to love the hockey aspect! This read would be great for both males and females, and Stacy Juba writes wonderfully real characters. I also listened to this in audiobook form, and the narrator did a great job at fluctuating their voices so I could tell all the characters apart, and the narrator maintain a steady voice level. I look forward to reading more books by Stacy Juba!

clean YA novel for hockey fans

Brad and TJ are fraternal twin brothers who love playing hockey. Their father has aspiring goals for TJ attending an Ivy League university and therefore places him in a private high school, whereas Brad goes to the local public high school, until the family's financial situation changes, and TJ must now transfer to public school. All of this causes resentment on both sides, with TJ feeling pressure from his father to perform and Brad feeling he isn't as good as his brother. Things heat up when TJ becomes the new kid in Brad's school and is vying for captain of the hockey team. With their parents on the verge of a break-up and pressure mounting in the hockey rink, Brad and TJ will have to face-off and pull together to win.

I enjoyed listening to the audiobook version of this re-issue of a book initially written in 1992 by the author when she was sixteen and published when she was eighteen. The storyline and plot flow smoothly as the author builds the characters of two teens in the midst of problems both in the family and at school. The dialogue is realistic and the teens sound like teens, no surprise since the author wrote this when she was a teen. I'm not a hockey fan but I could easily see how much the author knows about hockey and the game, making it even interesting for a mom like me who doesn't have any kids playing the sport.

Maxwell Glick, the narrator, does a good job of changing tones when voicing all the different boy characters in this novel. I could distinguish the subtle pitch in TJs voice that was slightly different from Brad who was more of a hot-head.

This is a YA novel about hockey, family and brotherhood. This book is a quick read and ideal for anyone who likes hockey within a school setting or who just likes a good clean YA read.