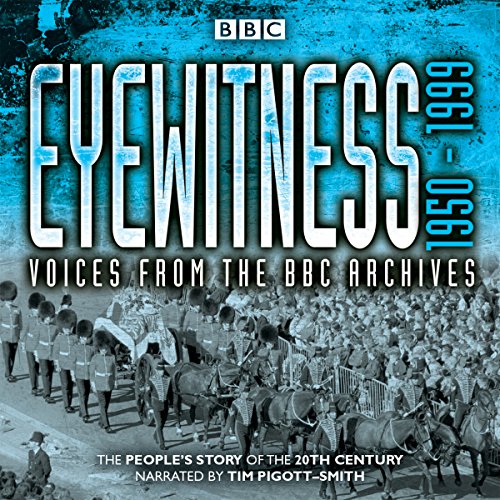 By: Joanna Bourke
Narrated by: Tim Pigott-Smith
Try for $0.00

Eyewitness accounts from the BBC Archive are at the heart of this unique history of the latter half of the 20th century, narrated by Tim Pigott-Smith.

The events of 1950-1999 are described by the people who saw them happen, from the Festival of Britain in 1951 through to the dawn of a new millennium at the end of 1999. In between are the eras of the Angry Young Men, the Teddy Boys and the Punk Rockers; the arrival of rock and roll and the permissive society; the advent of industrial strife in England and sectarian unrest in Northern Ireland; the rise to power of Margaret Thatcher; the miners' strike, three-day week and Winter of Discontent; the Queen's Silver Jubilee; the IRA's campaign of bombing and the eventual Good Friday agreement; and the marriage of Prince Charles, the death of Princess Diana, the Poll Tax riots and the British participation in wars in the Middle East and Bosnia.

Events both joyful and sorrowful are illustrated with fascinating and rarely heard archive recordings, with a linking narration by the historian Joanne Bourke. Thought-provoking and moving, these are the voices of the past speaking to the present day.

A brilliant sequel to it's 1900-1949 series. All excellent. Not from the UK, but I find history from the BBC very interesting.

A perfect way to remember history.

I cannot help it but I have listened to this three times. Fantastic and terrible memories presented in a recognisable and factual way. Many a long car journey has been made enjoyable by this great collection.

I am just about to listen for a third time. It is more fascinating than any other audible book I’ve ever listened to. Learn something new every time I listen. X