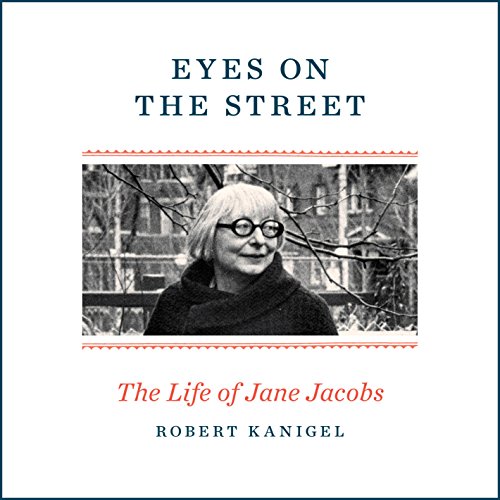 Eyes on the Street

By: Robert Kanigel
Narrated by: Kimberly Farr
Try for $0.00

The first major biography of the irrepressible woman who changed the way we view and live in cities and whose influence can still be felt in any discussion of urban planning to this day.

Eyes on the Street is a revelation of the phenomenal woman who raised three children, wrote seven groundbreaking books, saved neighborhoods, stopped expressways, was arrested twice, and engaged at home and on the streets in thousands of debates - all of which she won. Here is the child who challenged her third-grade teacher; the high school poet; the journalist who honed her writing skills at Iron Age, Architectural Forum, Fortune, and other outlets while amassing the knowledge she would draw upon to write her most famous book, The Death and Life of Great American Cities. Here, too, is the activist who helped lead an ultimately successful protest against Robert Moses' proposed expressway through her beloved Greenwich Village and who, in order to keep her sons out of the Vietnam War, moved to Canada, where she became as well known and admired as she was in the United States.

"Kanigel's delight in his subject, 'one of the premier intellectual figures of the twentieth century,' shimmers on every page... He takes full measure of [Jacobs's] accomplishments and influence and elucidates the scope and passion of her unique quest to understand what sustains civilization." (Donna Seaman, Booklist)
"Find out how an owlish thinker on a bicycle defeated the urban planner Robert Moses, saved Greenwich Village, and continues to shape your favorite American cities." ( Esquire)
"Jane Jacob's life was chock-full of insights, merriment, amazing stories, aphorisms, mischief, astonishing antics, principled actions, and of course writing. Kanigel has captured it all in this compulsively readable life of Jane." (John Sewell, former mayor of Toronto)

What listeners say about Eyes on the Street

I Spy With My Little Eye Something Radiant

What are the conditions that promote innovation?

“Simple minded notion that people are passive domestic animals who will flourish like well kept domestic animals if their environment is well kept.”
“Strong ideas and the only problem is that you state your conclusion before you demonstrate it concretely.”

Could have been more concise.

The middle section of this very long book gets weighed down with specifics from about 1958-1963. I kept thinking the timeline had moved on, but then it would be 1962 all over again. Jane Jacobs was an amazing figure and I am glad to have come across this book.

This book brings Jane Jacobs alive in a intimate and thorough way. Thorough details of her life. Excellent biography of an amazing woman.