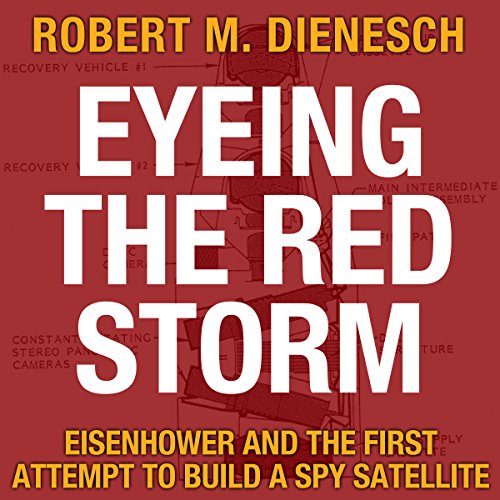 By: Robert M. Dienesch
Narrated by: Jim Woods
Free with a 30-day trial

In 1954, the US Air Force launched an ambitious program known as WS-117L to develop the world's first reconnaissance satellite. The goal was to take photographic images from space and relay them back to Earth via radio. Because of technical issues and bureaucratic resistance, however, WS-117L was seriously behind schedule by the time Sputnik orbited Earth in 1957 and was eventually cancelled. Eyeing the Red Storm examines the birth of space-based reconnaissance from the perspective of WS-117L. Robert M. Dienesch's revised assessment places WS-117L within the larger context of Dwight D. Eisenhower's presidency, focusing on the dynamic between military and civilian leadership. Dienesch demonstrates how WS-117L promised Eisenhower not merely military intelligence but also the capacity to manage national security against the Soviet threat. As a fiscal conservative, Eisenhower believed a strong economy was the key to surviving the Cold War and saw satellite reconnaissance as a means to understand the Soviet military challenge more clearly and thus keep American defense spending under control. Although WS-117L never flew, it provided the foundation for all subsequent satellites, breaking theoretical barriers and helping to overcome major technical hurdles, which ensured the success of America's first working reconnaissance satellites and their photographic missions during the Cold War.

"Readers searching for a detailed analysis of early spy satellite development will approve of Dienesch's accessible work." ( Publishers Weekly)
"An intriguing and incisive study... Eyeing the Red Storm puts readers into the middle of the Cold War." ( Foreword Reviews)
" Eyeing the Red Storm is a valuable contribution to the existing literature on military space programs." ( Washington Book Review)

What listeners say about Eyeing the Red Storm

Dienesch discusses the views of Truman and Eisenhower on the Cold War. The United States was in the process of developing a space satellite when the USSR sent up Sputnik on October 4, 1957. Thirty-four months later the U.S. launched its own satellite.

The author goes into depth about the various military services duplicating research, and the Army demanding to be in charge of the rockets, missiles and satellites claiming there were an extension of its artillery. Eisenhower assigned the Air Force to head the program, and assigned the CIA as a partner for developing the spy satellites.

Dienesch reviews the WS-1176 program, the Corona Satellite and the civilian Vanguard program. The author also goes into great detail about the RAND Corporation’s role in the development of satellites from 1945 to 1954. He also covers the development of the U2 program with Lockheed. Eisenhower started DARPA (the Defense Advanced Research Projects Agency) to avoid the waste of resources from duplication of research.

The book is well written and researched. The author provides a brief review of the cold war development of the satellite programs including the scientific, political and economic viewpoints. Dienesch is a Canadian historian.

The book is about seven hours long. The narration of Jim Woods was at a rapid pace. Woods is an actor and audiobook narrator.