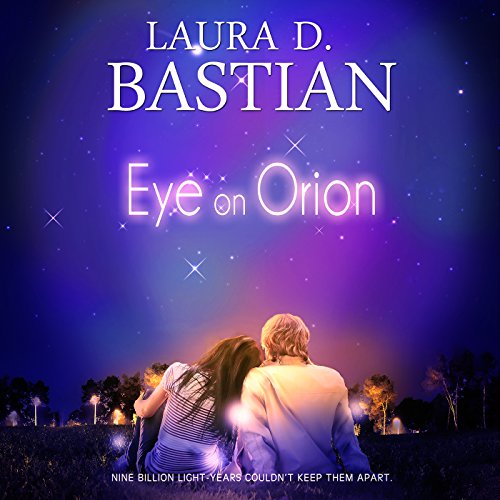 By: Laura D. Bastian
Narrated by: Julie Kelly
Free with a 30-day trial

Falling in love with your gorgeous new neighbor isn't a bad thing, but when he turns out to be the bodyguard of a princess from a planet nine billion light-years away, life gets complicated.

Seventeen-year-old stargazer Holly Adams never imagined she'd find herself trying to prevent the overthrow of an alien government. When Jai and his sister Amira move into the house down the street, Holly is immediately drawn to them. Jai acts suspicious of her from the start, making Holly more curious about their oddities. When Holly learns they are from a different planet, she does what she can to help protect Amira from Shander, a man who wants to marry her by force in order to take over the kingdom her father rules.

Mistaken identity, a botched kidnapping, and a first kiss that bonds Holly and Jai for life are hard enough, but when Shander believes Holly to be the princess, things get even more dangerous.

What listeners say about Eye on Orion

Clean YA/Teen Romance. I really enjoyed listening to this audiobook. The story is interesting and kept me wanting to find out what would happen next. It is a bit slow at first but it picks up towards the end.

Narration was good and it brought the story to life. Some of the voices were a bit monotonous but ok. She sounded like a machine at times.

The story is clever and unique. The way they travel between planets is unexpected but a smart idea. It was much better than I had expected it. I hope there will be a second book with a follow up of what happened to the princess. I'm looking forward to reading more books by this talented author.

Audio version This book itself is very good. I gave it a 4 for it ends with many unanswered questions. I hate spoilers so I won't go into details. I have the audio version and I'm sorry to say that the narration is rather robotic, it was very hard to listen to I don't know how many times I stopped listening. Reasons I enjoyed this book: Romantic, Wonderful characters, Page-turner, Great world building, Original, Easy-to-read but not to listen to, Entertaining, Action-packed, whimsical. Bookshelves/tags that I'd put this under. adventure, alien, cliffhanger, contemporary, older-children, read, recorded, romance, science-fiction, series, suspense This book was given to me at my request from the publisher or author and I provided this unbiased voluntary review.

Eye on Orion is a YA paranormal/romance novel written by Laura D. Bastian and performed by Julie Kelly. It's my first time listening to an audiobook written and/or performed by either. I'm not sure if Ms. Kelly was instructed to read the parts of Jai, Amira and the others like robots, but that's how it came across. They were supposed to have moved from Scotland and, well, there wasn't a Scottish accent to be heard anywhere. I can honestly say that it was a grind for me to get through this audiobook because the narration drove my nuts. When Ms. Kelly was reading Holly's parts, it wasn't bad, but I just couldn't get past the robotic narration of the others.

The story was fairly entertaining, although I'm pretty sure that not enjoying the narration made the story itself less enjoyable for me. I'm not sure which books to compare the story to, though it seems that this story has been done before. I did enjoy the various characters and the way that they ended up communication between themselves was a new idea. Overall, I don't think I'll be listening to any future stories by this author/narrator combo, though I do think that this series could definitely do with a follow-up book, as I think that there is more to explore within the story. I would recommend getting a new narrator or revamping the terrible accent that the visitors have in future recordings. I think that I was voluntarily provided this free review copy audiobook by the author, narrator, or publisher for an honest review.

Written in the stars

I'll be the first to admit, I'm a sucker for a good romance. This young adult version of a romance didn't disappoint.

This book combines a &quot;girl next door&quot; story with an alien twist. It is absolutely a fun listen. Once I began the book, I didn't want to stop until I was finished with it. For me, the characters were well developed and the story progressed at a near perfect pace. I will be listening to this book again.

The narrator had the perfect voice for this story. Her voice sounded young enough to be the main character, but was professional through the entire story. I wouldn't hesitate to listen to another book by this narrator.

Very good YA science fiction romance. Likeable characters in a fun story. There is some tension, but not enough to make the story uncomfortable for most age groups.
The book is a series, but I did not feel like the ending was a major cliff hanger.

I liked the fresh idea the author had and how the characters did surprise me. But I had a hard time connecting to the characters and thus the storyline. The performance by Julie Kelly was good! Her voice and recording quality was excellent though sometimes I felt the inflection was a little flat; though that may have been a style choice. Overall a very good performance and a good book, if the blurb appeals and you like a little young adult romance with a dose of paranormal this one will be for you!

This is a cute story safe for any age. It's summer and Holly's best friend moved replaced by new neighbors, a brother and sister. At first Holly isn't sure about them. They're family is odd. As a star gazer with a telescope on her roof the brother Jai (not sure if I spelled that right) joins her one evening and she realizes they aren't so bad. He's stiff and boring at first but begins to lighten up. Soon the three are spending quite a bit of time together, quickly becoming friends. It doesn't take long when she learns their secret.

The story flows at a steady pace and I really liked Holly. She's a gutsy girl. Soon her and Jai realize they are equally attracted to one another. The story is a bit far-fetched for me but no doubt young teens would enjoy it. I will give the author credit for the unique way they travel through space, very clever. The siblings speak in a mechanical tone that occasionally the narrator used too excessively, other than that it was a good performance.

I really liked this book. However there is very little action. There is more explanation about the planet they come from and what is happening there. Would love a bit more information on the soul mate since I thought we did not get a lot of info.
I don't know if the author did this on purpose or if it was a coincidence but one of the character is called Amira and in Arabic it means princess. I thought that was clever of the author if she intentionally did it.
Would recommend to all. Looking forward to the next book.
The narrator is one of the better one's that I have listened to. She puts more emotions in the characters.

I was voluntarily provided this free review copy audiobook by the author, narrator, or publisher in exchange for an unbiased review.