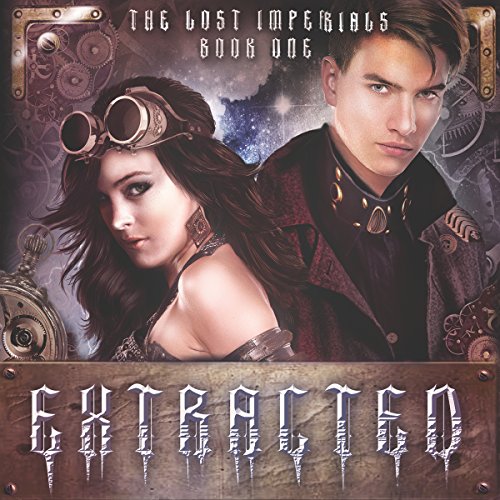 Welcome to the war.

The Tesla Institute is a premier academy that trains young time travelers called Rifters. Created by Nicola Tesla, the institute seeks special individuals who can help preserve the time stream against those who try to alter it. The Hollows is a rogue band of Rifters who tear through time with little care for the consequences. Armed with their own group of lost teens, their only desire is to find Tesla and put an end to his corruption of the time stream.

Torn between them are Lex and Ember, two Rifters with no memories of their lives before joining the time war. When Lex's girlfriend dies during a mission, the only way he can save her is to retrieve the Dox, a piece of tech that allows Rifters to reenter their own timeline without collapsing the time stream. But the Dox is hidden deep within the Telsa Institute, which means Lex must go into the enemy camp. It's there he meets Ember, and the past that was stolen from them both comes flooding back. Now armed with the truth of who they are, Lex and Ember must work together to save the future before the battle for time destroys them both again.

What listeners say about Extracted

Introduction to the fascinating world

Would you be willing to try another book from Sherry Ficklin and Tyler H. Jolley ? Why or why not?

What does Grace Glass bring to the story that you wouldn’t experience if you just read the book?

This is the first time I've listened to Grace narrate. I really like how she puts extra thought into Tesla's voice. His voice has a mechanical sound to it, as though it's over a computer and emotionless. We get two main POV's, yet Grace helps put emotions and character into other characters in the story when they speak. We get the main feel of Ember and Lex through their views as we hear their emotions and how events affect them, Grace voices those feelings deeply as well.

The story is fast moving from the start. There are fights between Tesla Institute kids and Hollows kids, even training between Lex and Stein. We get our fill of fights here, and that's okay with me!

There is an attraction between characters. There are relationships and we see love between Lex and Stein, both Hollows and strongest Rifters. Stein is a strong girl. She fights and knows how to handle herself. She's fearless.

This world of time traveling and Tesla is riveting for me. I'm drawn to the creation here. The story is strongly character driven from the kids that rift through time.

We get the story from 2 POV's, Lex and Ember. Each a member of a different group of kids who fight each other - The Hollows and Tesla's Institute. If we get mention of one thing in one group, it's usually explained in more detail in the other. It feels like a show and explain process. Rather interesting as we get to see how things affect the story, characters or time, and why.

Lex and Ember seem strong in the time stream abilities and fighting. Lex feels he's comfortable in the Hollows group, with friends that are dear to him. Ember has her dear friends in the Tesla Institute and follows what is taught to her, but she has a feel as she does question a few tactics and way of things. Ember feels as she's not as comfortable at the Tesla Institute, but that's her home as well. It's not a bad place, she's not in danger there, but their way of things and her unknown past seem to clash in her heart. Ember does realize why through the book, and finds her way to somewhere else.

The beginning of this book shows us the characters but it feels as there isn't a defined conflict yet. Sure, There are small missions and we see that The Hollows and Tesla Institute kids don't get along, but nothing big to give us the feel of where the story is going. We do get introduced and get to know the characters in this time getting us to like the feel of this world and idea of Rifters, even what can happen in the time stream to them. As we get to know our main characters we see how they love deeply for another, holding on to that love with the lose of their memories before Rifting. They will do anything for that other person, and Lex does. This brings the two worlds crashing together more than they have fought in the past.

In time the series title and direction of the book becomes clear. The Lost Imperials and Ember and Lex's POV's are all connected. This story is about them, how they lost each other and found each other again. But, it's not the connection you would think. ;) It's something deeper and longer lasting. We also come to learn why these children are picked to be rifters. Interesting.

The one thing that could be a problem with time travel is a paradox, and these kids face what could create it and what could happen if they try to change things. Should they chance it? And face the consequences?

AMAZING WEAVE OF FANTASY AND HISTORY!

Loved this so much I have listened to it 3 times in a row! Characters are charismatic. Storyline captured my imagination.