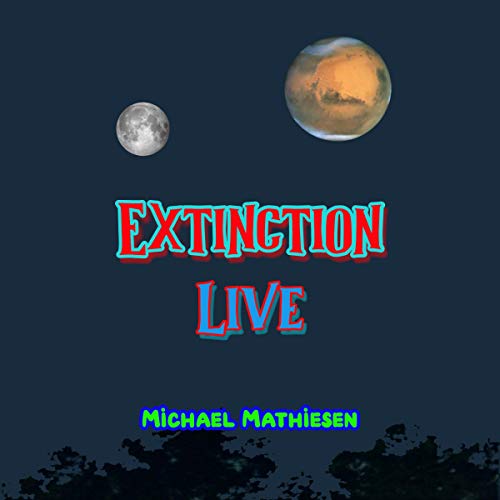 Watch the Extinction of Humanity live as it happens. Science fiction or history in the making? You be the judge.

New science fiction thriller invites you to watch the Extinction of the Human Race live as it happens. Amazing, mind-blowing story for those who are worried the planet is on a dangerous course but who may also want to be part of something that can save it. It's still not too late if we get a little help from our closest neighbors on Mars and even Alpha Centauri. Let's not forget about Man's best friend. There may even be enough real science and technological innovation in this book that will avert the final disaster and make life on Earth better and last to eternity. Evolution takes a mind-blowing right turn away from the ultimate catastrophe because we have discovered the secret of of our fate, the Human genome, as well as the code of Artificial Intelligence and soon an Artificial Consciousness that is expanding rapidly out beyond the space between our ears. "In Positronium, We Trust."

Things on Planet Earth are going badly. There is no political will to stop or greatly curtail the use of fossil fuels which, year over year, makes the planet's temperature rise steadily. The average Earth man or woman also refuses to limit their consumption or cut back on their expectations of the quality of their lives and so the raping of the Earth will continue. Like drug addicts, few are able to cut down on their habits even though they know it's killing them.

By the middle of this century it becomes extremely hard for many species to remain alive. Like the proverbial "Canary in the coal mine" Birds are the first to go. Then, the bees go missing and this puts the food supplies of the world on the verge of disappearing. But the worst is yet to come.

Temperatures get so hot that most mammals cannot live our normal lives and then we hit the tipping point and there is nothing we can do to turn things around. The permafrost melts, the oceans heat to such a degree that methane from the ocean floor pours out and completely alters the atmosphere into something almost impossible for humans to breathe. It's just a matter of time. Global institutions collapse and complete chaos ensues. As a measure of complete desperation scientists have stored all of the DNA preserving nearly every life form on Earth since it began, in totally sealed caverns in the northern parts of Greenland as a way of possibly returning all life to the Earth someday far in the future, if it can ever be cooled off and brought back to normal.

At the same time, a Martian Colony, based out of "Musk Station", the main population hug on Mars is having great success terraforming the Martian atmosphere and using the knowledge gained to make an attempt to rescue the Earth. But by now, the Earth's temperature has soared to almost 900 Deg. F, the melting point of lead. No living thing, not even a blade of grass, has survived on Earth. But, the Martians, headed up by a highly motivated teenager and his friends, have put together an invasion of space ships that carry the ability to bring life back to Earth by using the Martian technology of terraforming the atmosphere.

The story is told from the point of view of K-9, a Martian Rover, and "Man's Best Friend", who has been developed with the highest level of Artificial Intelligence and even an Artificial Consciousness, ever conceived. The three Martian ships with newly discovered Positronium Anti-Matter engines that will help the Martians invade the Earth in order to save it are also equipped with a highly advanced intelligence and have additional resources that have never been fully understood by most computer scientists or engineers today.

What listeners say about Extinction: Live

worst "audio book" on this service

I knew by the 9 fake 5 star ratings on this book that it was going to be bad, but I had to get it and listen to it to create this review. I threw myself on the grenade for all of you. now you know. remember my suffering and stay away. don't make my sacrifice be in vain. btw, this review is far better than the book.

It gives refreshing ideas to listeners

If you like classic sci-fi audio-books that are read to you by the author - this is for you. I was skeptical at first and then listened to the free sample at Audible and I knew I had to hear more. Fantastic story that seems to be predicting the events of the next few years that will either kill us all or redeem us all as the greatest thing in the universe. So cool. I couldn't put it down.

Fantasic, amazing, highly thought provoking, the Science is cutting edge and there are concepts here that may be the future now. I was very moved. If this is not turned into a huge science fiction movie, I'll eat a bug.

Best Audible Book I've bought so far. Swept me away from the opening pages and I never looked up. My spouse loves it too. We're big fans. I hope Elon Musk is listening.

Everything is very well explained with example

I thought I'd be bored and would soon be asking for my money back because it was going to be preachy, but boy -- was I wrong. The story moves you along right from the start and you realize this is the next few years of history he's laying out for you. Just when you think you know where it's going to go, it goes into a completely new direction and all of it - and I mean all of it comes together in the end. And folks there is no ending in Literature anywhere in the world like this ending. Mind-blowing. Many thanks to the author.

It was an excellent choice and very well decorated

I wish I could give this 10 Stars. Great Audible audio-book & Many thanks to the author.

As the global climate crisis has been worsening, I've been looking for audio-books, or even one audio-book, that would give me some hope for the future. None of them really did this for me because the situation is worsening more rapidly every day, not slowing down. I was about to give up all hope and tell my wife we would not have children. Then, I found this audio-book. There is hope and everyone needs to read or in this case, listen to this wonderful science fiction novel. It's like nothing you've ever learn before - trust me. Be prepared to be blown away.

Easy to learn with detailed information!

Great Audio-book -- Was expecting someone like Morgan Freeman as the narrator. But, got the author - that makes it even better. WOW- what a trip into the most exciting future of our species and all life on Earth. Go SpaceX!!!

I found this to be a really helpful resource

Don't start this audio-book until you find yourself a soft comfy chair or sofa, shut off the phone, put away all distractions AND have the time to listen to it all because you will not be able to stop after you launch this amazing adventure. I loved it more than any movie I've ever seen.

Thanks, author for decorated a good audio-book