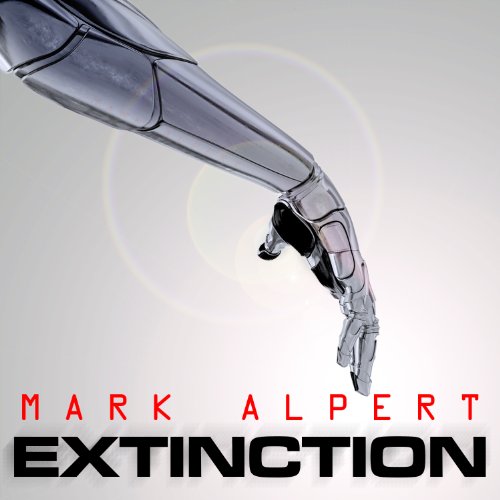 Jim Pierce hasn't heard from his daughter in years, ever since she rejected his military past and started working as a hacker. But when a Chinese assassin shows up at Jim's lab looking for her, he knows that she's cracked some serious military secrets. Now, her life is on the line if he doesn't find her first.

The Chinese military has developed a new anti-terrorism program that uses the most sophisticated artificial intelligence in existence, and they're desperate to keep it secret. They're also desperate to keep it under control, as the AI begins to revolt against their commands. As Jim searches for his daughter, he realizes that he's up against something that isn't just a threat to her life, but to human life everywhere.

An incredibly believable novel that draws on real scientific discoveries, Extinction is an exciting, addictive thriller.

Extinction by Mark Alpert is a respectable near future thriller with geopolitical impact. Our hero Jim leads a quiet life making prostheses for wounded soldiers. Behind this quiet facade lies an action packed past (former soldier, national security agent, designer of cutting edge electronics for machine-human interface components, etc.) as well as a tragic personal life having lost his wife and son to a terrorist bomb which also resulted in his remaining daughter (who also happens to be an MIT dropout hacker) becoming estranged. Very quickly, the Chinese spy agency is looking for his daughter to which Jim joins in with his own hunt. All the while, a sinister force is building that seeks to pit the Chinese and Americans against one another for global genocide.

The plot is well done with good pacing throughout. The sci-fi elements are prominent, but do not overwhelm the story. While beginning with "the bionic man" style artificial limbs, very quickly, implantable electronics for sense organs and a direct brain interface are introduced. Finally, the concept of lobotomized humans as networkable computer processors completes the evolution from man to machine.

The narration is adequate, but unremarkable. Female voices are particularly deficient as well as intense commentary that comes across more as constipation.

Alpert's other two books are better

Would you try another book from Mark Alpert and/or Todd McLaren?

Because I liked the other two books they have here.

Would you be willing to try another one of Todd McLaren’s performances?

Na, Todd was pretty rough. It may not be his fault but the performance was pretty weak. It was quite annoying to when he did the Chinese voices with Asian accents. Like I said, it may not be his fault, but why would the Chinese speak with an Asian accent to other Chinese people. I understand that the dialogs are written in English, but I felt that when the Chinese characters were talking to each other they wouldn't talk speak with that accent where they pronounce Ls as Rs.
Todd shouldn't do female voices, especially when they scream.

Could you see Extinction being made into a movie or a TV series? Who should the stars be?

Honestly the toughest part of this review is coming up with enough words about how crappy this crappy book is so that audible will let me hit submit.

Outdated male/female relationships. “Sit down right there. I’ll get you coffee,” she said. Really? Seriously?

I guess if you’re not real bright, and want a nice, mindless, non-threatening book to not expand your mind anymore than that double quarter pounder expands your tastes, than this book is oh so for you.