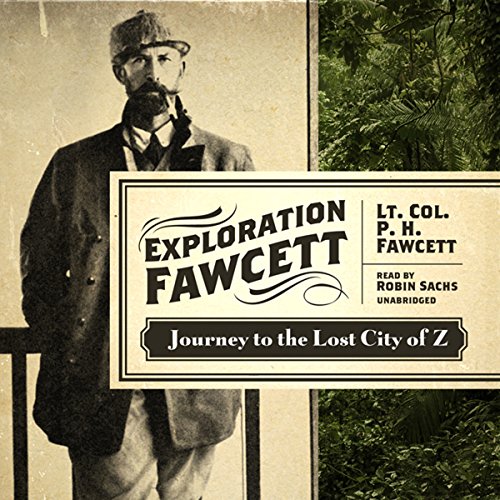 This is the true story of the real Colonel Fawcett, whose life was the inspiration for the best-selling book The Lost City of Z and an upcoming movie starring Brad Pitt. A thrilling account, it tells of Colonel Fawcett and his mysterious disappearance in the Amazon jungle, which is now considered one of the greatest mysteries of the 20th century.

The mystic and legendary British explorer Colonel Percy Harrison Fawcett disappeared in the unknown and unexplored territory of Brazil’s Mato Grosso in 1925. For ten years, he had wandered the forests and death-filled rivers in search of a fabled lost city. Finally, convinced that he had discovered the location, he set out for the last time with two companions, one of whom was his eldest son, to destination “Z”, never to be heard from again.

This thrilling and mysterious account of Fawcett’s 10 years of travels in deadly jungles and forests in search of a secret city was compiled by his younger son from manuscripts, letters, and logbooks. What happened to him afterward remains a mystery.

“[A] tale of great adventure…a stirring and sensitive record, well written by a true explorer.” ( New York Times)
“[A] book of great power…should be read by everyone.” ( Daily Telegraph)

What listeners say about Exploration Fawcett

Rather academic, but fascinating.

The story of P. H. Fawcett's explorations in South America in his own words. The perfect companion to "The Lost City of Z".

Interesting to anyone interested in the Fawcett expedition. It does get slow at times and is full of local observations and descriptions of the difficulties of traveling in South America during the time period.

Amazing story of an amazing man.

This story borders on the verge of being unbelievable. The exploits and the difficulties he endured paint a picture of the challenges that were part of the explorations of South America.
His ability to take the reader to where he is and describe what he was seeing and experiencing is of a such a great quality that one would think you were reading an author of many books.

didn't get through this one. very monotone narration and weak presentation of storyline. i tried more than once to get into it

way way too slow. too many pauses. speed it up.

needs to be redone. this is excruciatingly slow. too many pauses in sentences. not very interesting.

not much about the actual expedition

What disappointed you about Exploration Fawcett?

14 hours of Fawcetts survey of various borders,not much of the actual research into the lost city of z.

Would you ever listen to anything by P. H. Fawcett again?

performance was fine given the material

just to slow,while it did have some interesting observations,not enough to really reward the listener.