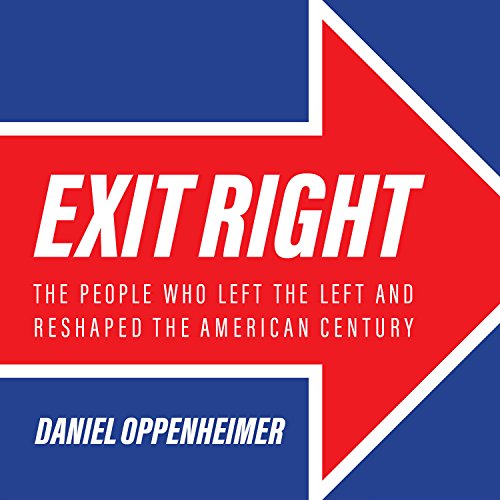 The People Who Left the Left and Reshaped the American Century
By: Daniel Oppenheimer
Narrated by: John Pruden
Length: 13 hrs and 2 mins
Categories: Bios & Memoirs, Political Figures
4 out of 5 stars 3.8 (23 ratings)

In Exit Right, Daniel Oppenheimer tells the stories of six major political figures whose journeys away from the left reshaped the contours of American politics in the 20th century. By going deep into the minds of six apostates - Whittaker Chambers, James Burnham, Ronald Reagan, Norman Podhoretz, David Horowitz, and Christopher Hitchens - Oppenheimer offers an unusually intimate history of the American left and the right's reaction.

Oppenheimer is a brilliant new voice in political history who has woven together the past century's most important movements into a single book that reveals the roots of American politics. Through the eyes of his six subjects, we see America grow, stumble, and forge ahead - from World War I up through the Great Depression and World War II, from the Red Scare up through the Civil Rights Movement, and from the birth of neoconservatism up through 9/11 and the dawn of the Iraq War.

"Oppenheimer's insightful narrative should inspire some soul-searching among political believers of every stripe." ( Kirkus)

This is a very serious book! Daniel Oppenheimer is the intellectual equal to any of the political and literary giants whose lives and thoughts he reviews. He obviously read and researched deep and wide to prepare for this book. I suspect he had enough information to write a separate biography on each of the six gentlemen he uses as examples. I just finished the book and would recommend it to anyone who wishes to understand how political alliances are created and destroyed. More than that, Oppenheimer reveals how history, circumstances, ambitions, egos, and social longings are weaved together to form a personal destiny for each individual. I cannot call it entertaining, but, for anyone who is intrigued by history and wants to gain insights and understanding of the 20th century, this book is essential. Oppenheimer gives a very detailed history of the personal lives of his subjects up to and leaning to their "exiting right," but not much after their exit. I would liked to have read more of his explanation on how their lives progressed after they had "left the left," but that was not the purpose of his thesis in "Exit Right."

Most pedantic boring story I’ve ever heard. I wouldn’t recommend this to my dead aunt.