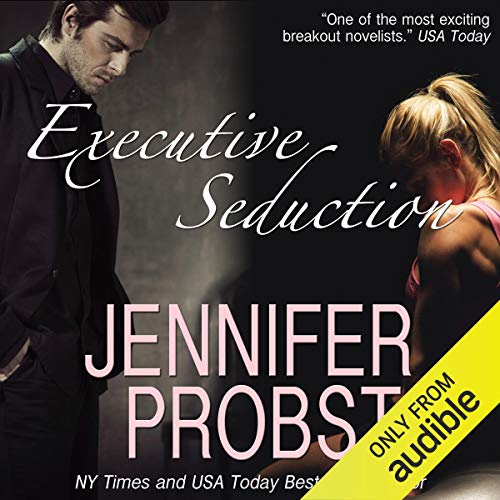 By: Jennifer Probst
Narrated by: Anne Johnstonbrown
Try for $0.00

Logan Grant knew Chandler was trouble the moment he laid eyes on her. He agrees to her business proposal because he wants a guaranteed profit…and he wants Chandler Santell. But a dangerous game of love, power and greed play out behind the scenes.

The payout is worth millions, but only if he can claim her heart. Chandler Santell has successfully avoided rich and powerful men who believe more in money than in people. But when her Yoga and Arts Center is on the verge of financial ruin, there's only one man who can help her: Logan Grant - the most ruthless CEO in the finance industry. He's her only hope and she's willing to do anything to save her dream. Absolutely anything.

What listeners say about Executive Seduction

What did you love best about Executive Seduction?

Jennifer Probst is well known for her stories of a girl needing money, finding a rich sexy guy and falling in love with him, not his money. I give her credit for her ability to show the true feelings of love. But where this books fails is that it's a republish with tiny updates of a story she wrote years ago only she forgot to update a few parts of the book so it mixes parts of the story up - from million dollar deal to a billion dollar deal. If she was going to do an update she should have had better editing to make sure she didn't miss anything.

Still it was an enjoyable story, minus the narration.


Who would you have cast as narrator instead of Anne Johnstonbrown?

Oh wow I hate to be mean but this book was pretty much ruined by the narration. I'm just floored it got approved. The problem is two fold. First she sounds far older than the main female character should be, the narrator sounds like she may be in her late 50s or 60s but even worse is the way she over-pronoucnes words and puts extra emphasis on every T. Do you realize how many times a word has a T sounding in it, in any given book?

It's bad. Really really bad and time and again you find yourself cringing listening to the narrator speak.

The story was good, not the best ever considering it was written like 10 or 15 years ago and only parts of it were updated but yeah, I would say it was a story I was interested in finding out how it ended.

This is a comment not only for this author but all of them ... listen to your book. Really listen and if the narrator is horrible, have some backbone already and be honest. Get a new one. This book was completely ruined by bad narration.

Would you try another book from Jennifer Probst and/or Anne Johnstonbrown?

The over-pronunciation and over-acting of every word ruined a story that could have been entertaining.

Did Executive Seduction inspire you to do anything?

Narrator has to loosen up!

This is a romance novel not a technical how to! She almost ruined the book for me. The story was good though.

The narrator in this book made it a difficult read, I can see that she would be better suited reading a historical novel or something like that. This story was pretty good, our normal sexy billionaire and hot woman! Story line was standard and pretty good, but not the best. I LOVE LOVE Jennifer Probst and I know this is her baby, her first book. I'm glad she went through it and updated it, but the writing is still her first book. It isn't bad at all, it was good, but not as good as her newer stuff. The major issue here is the narrator.

Yes, I enjoyed it, yes, I am glad I listed, no I probably won't listen to this one again.

Good story but I didn't care for the narrator

Would you listen to Executive Seduction again? Why?

No. Really couldn't listen to the narrator again

She enunciated way too much

Where does Executive Seduction rank among all the audiobooks you’ve listened to so far?

The book was interesting and worth the money in itself, but the narrator pretty much destroyed the book.

Logan because he was a good guy who cared about her from the first. I tend to prefer heroes that pursue the heroine instead of vice versa. The heroine who gets involved with a man who can't decide that he loves the heroine is boring and unromantic.

I theorized that the problem with this narrator is that someone had criticized her about poor enunciation in the past so she rebelliously decided to exaggerate her enunciation of consonants to the point of ridiculousness. I FounD ThaT her eNuncIAtion was DisTracTing anD DETtracTing To The PoinT ThaT iT PreTTy MuCH DesTRoyeD The PleaSure of ListeninG To The BooK. I have known that a poor narrator has caused Audible to re-record the book and distribute the new recording to the customers that already own the book. I think that this should be the case here. I imagine this has to be done through the publisher but I think that Audible should pursue this with the publisher. Otherwise I think that they should return the credit or money to the customers.

I WANT MY CREDIT BACK

What disappointed you about Executive Seduction?

I had to stop listening after 53 minutes. The story was not lacking, I really could not get over the narrator's robotic, monotone voice.

Would you ever listen to anything by Jennifer Probst again?

I have read and listened to JP many times, and this is the first bad review I have ever made about her.

WHO TALKS LIKE THAT??? I thought the book was being read by a computer at one point.
Ms. Probst should sue the narrator for killing her book!

If you could play editor, what scene or scenes would you have cut from Executive Seduction?

Sorry Ms. Probst. If I were you I would ask to read your own stories from now on, or at least have a say in who performs them!

LIGHT ENTERTAINMENT FOR THOSE EAZZZZE DAYS

A lighthearted sexy contemporary romance about rich, handsome, ruthless CEO Logan being talked into hiring Chandler a beautiful Yoga Instructor for the good of his employees well-being which in turn will help his business… and eventually him.

Yes it's predictable and pretty unrealistic but hey it's the journey to the HEA that we all love so much and they had a few pitfalls along the way but there was a nice build-up to some sexy times and a tender romance after trust and faith in each other was finally won.

Worth a credit? Mmmmm a difficult one and depends what you want from a listen - it's an easy-going, enjoyable, light listen so, if you're in the mood for one of those, then YES this ticks the boxes but it's also a bit forgettable and all too perfect so I would probably put it in your Wish List and wait for a sale.

just didn't do it for me

I really like jennifer probst but this just didn't check all my boxes. Some but not all. It was a great romance about a powerful CEO and his new business partner. Just what the blurp
said.

Narration was good too but it was boring a bit. I skipped 3/4ths of the book to get to end.

A first novel and it showed

Neither the yoga instructor breaking away from an unwanted career in business or the “heartless” business tycoon are very believable. Both were at times incredibly naive and foolish, neither communicated clearly. The author at times endorsed the idea that ethics in business are somehow different from ethics in life. I know Jennifer Probst went on to better work. Listen to this if you want to understand how her skills have grown but don’t expect much.