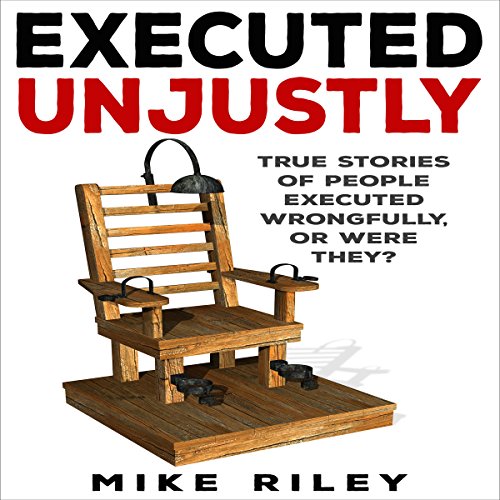 True Stories of People Executed Wrongfully, Or Were They?
By: Mike Riley
Narrated by: Stephen Paul Aulridge Jr
Length: 2 hrs and 9 mins
Categories: Nonfiction, True Crime
4 out of 5 stars 4.1 (7 ratings)

Executed Unjustly: True Stories of People Executed Wrongfully, or Were They? recounts the true stories of people who were accused, convicted, and executed for crimes. Some of them were later officially exonerated for the crimes, and for others the preponderance of evidence today shows they were executed wrongfully, though they were never officially found innocent.

The cases occurred in the United States, and it will be shown that our judicial system doesn't always result in fair decisions. It seems unimaginable to most of us that totally innocent people would actually lose their lives due to fear, social inequality, legal ineptitude, and downright criminal acts by those who promised to uphold the law.

Some of the cases included are:

Be prepared to be shocked at the details of these cases and the tragic reasons and ways the innocent died.

One innocent Person is too much

Would you listen to Executed Unjustly again? Why?

Probably, it was a good listen and i like to read the books over in 6 months to a year

Would you recommend Executed Unjustly to your friends? Why or why not?

yes, I'm so happy that with our new technology and understanding situations like this will not happen, Ihope.

no favorites I guess just the fact that so many innocent people died.

Interesting how far we have come as a society, forensics, Science etc