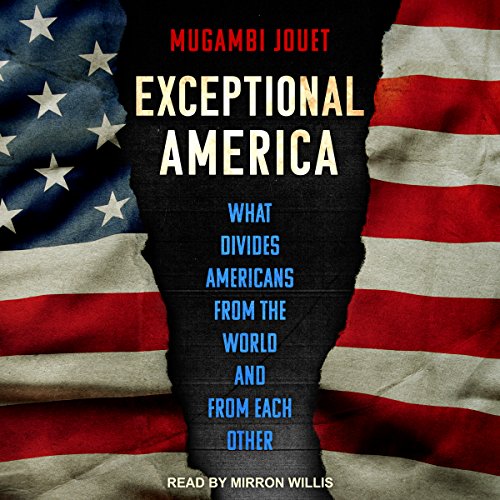 By: Mugambi Jouet
Narrated by: Mirron Willis
Try for $0.00

Raised in Paris by a French mother and Kenyan father, Jouet then lived in the Bible Belt, Manhattan, and beyond. Drawing inspiration from Alexis de Tocqueville, he wields his multicultural sensibility to parse how the intense polarization of US conservatives and liberals has become a key dimension of American exceptionalism - an idea widely misunderstood as American superiority. While exceptionalism once was a source of strength, it may now spell decline, as unique features of US history, politics, law, culture, religion, and race relations foster grave conflicts. They also shed light on the intriguing ideological evolution of American conservatism, which long predated Trumpism.

Anti-intellectualism, conspiracy-mongering, a visceral suspicion of government, and Christian fundamentalism are far more common in America than the rest of the Western world - Europe, Canada, Australia, and New Zealand.

"Thought-provoking…. Jouet was raised in Paris by a French mother and a Kenyan father, and he tackles his subject with a multicultural point of view, considering anti-intellectualism, fundamentalism, sex and gender roles and the politics of mass incarceration." ( The Mercury News)

What listeners say about Exceptional America

Not what you think.

I was looking forward to reading/listening to this book, maybe to shed some "unbiased" light on what we as American's are experiencing in todays political and social climate in regard to our echo chamber mentality, and haste to divide ourselves with distain for opposite opinion.

While there are some points of interest and certainly ask some profound questions, the book overall is an echo chamber for a specific American political party often using pejoratives for the current President and conservative politcal party (I can get that by turning on the news for either party).

One should note that the author is a naturalized French born and raised citizen; the very opinion of the author is part of the "divide" we experience today in the U.S.

If you want to hear/read a French opinion on the U.S. politcal climate as it applies to a european back drop and comparison, then this book is for you. If you're looking for a unbiased study, statistics, research, and cross reference of varying study across the academic spectrum, this isn't for you.