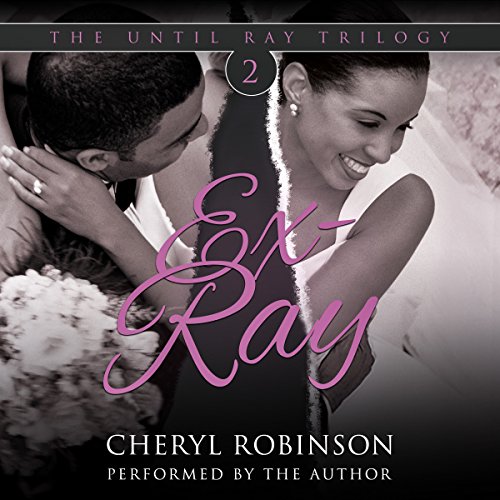 Ex-Ray: Book Two of the Until Ray Trilogy

He's not dead. He didn't leave me. He's missing.

Sarita Saint's first wedding anniversary is spent searching for her husband, Ray. While their marriage may not be picture perfect, Sarita is certain Ray would never leave her. She fears foul play. But the truth is much more mundane yet devastating. He left, without a word, without an explanation.

Twenty-seven years later, Ray is still struggling with guilt. Leaving Sarita was his biggest mistake, and he soon learns exactly how big. Despair takes him across the country, searching not only for his one true love but also for himself to tackle the personal demons he s never faced, and to correct decades-old mistakes. What he discovers will have him question everything he thought he knew about Sarita.

What listeners say about Ex-Ray: Book Two of the Until Ray Trilogy

The second book is so good. exceptional read with a cliff hanger ending. You have no choice but to continue with book three.

it's read too fast to where it's not understandable and interesting. Can't get into it

The author did a great job of building each character and providing their backgrounds. I liked that the book was a mix of current day and flashbacks which kept my interest and helped to lead up to the ending. Ray's mother was HILARIOUS - the narration really brought her character to life! Another interesting character was Sarita's gynecologist - he was so crazy that it was funny at times. Was glad when she finally made the right decision in regards to him. Both the story and narration was excellent overall! Was disappointed when the book ended - Can't wait for book 3!

Please hurry with next installment

GREAT BOOK. NARRATION WAS SUPERB. CAN'T WAIT UNTIL THE NEXT COMES OUT! PLEASE HURRY UP!

Narrated by the Author was wonderful!!!

It is a bonus when the author read the book/story and was a pleasant to hear Cheryl Robinson to read her book. I love her voice and story line was a surprise. So can’t wait for next book. I hope Ms. Robinson read the next book. My best part when Ray have to meet his wife at Restaurant and the best friend show up, OMG!! And Ms. Robinson nail it, that’s how men, want to show who is the alpha dog!!! Love it just can’t wait for the next chapter in Ray life

As the world turns and keeps on turning so does the lives of the characters throughout this trilogy.
Ray made a decisions at an early age and that decision was the catalyst for all things moving forward. But to find out more than twenty years later that possibly the decision made might not have been the right one becomes too much to forget about. But as the reader continues to read you begin to wonder what if it was the right decision but the delivery was off. Ex-Ray is the story of first love, do you remember your first love? Are you both still together?
I'm not going to tell you if Sarita and Ray stayed in love or how their story ends in Book two, but I will say love is a battlefield and a playground.
Ray is Sarita’s first and in a specific way Sarita is his first. Here’s the thing about first loves we'd like to believe, you will always love them, they will stay with you forever; and first love, last love...umm
Robinson did a great job narrating this story of love and the possibility of second chances. The story line flows and the supporting characters help Ray & Sarita advance in the story. It was amazing to hear this author narrate for all characters and pull it off without a hitch. Some books I've listened to a female author was not able to pull off other characters but Robinson did an excellent job and you can tell she enjoyed it.
This is one trilogy I’m totally excited about after reading Book One I couldn’t wait for Book Two, now Book Three com'on..

I love it! I think Cheryl should narrorate all of her books! The characters were great! I hope that Boon gets his. Im also on the fence about Ray because he shouldn't get a pass either. Neither guy deserves her.

So true to life with a lot of humor

Boon is a dirty dog 🙄 n I hope he gets what’s coming to him in book 3. I read the book n listened to the audible version. The character voices so funny especially Ray n his mother 😂😂😂. But baby Karma is a B omg what happened to Ray 🤦🏽‍♀️😳. I can’t wait till book 3 I recommend reading the book than listen to the audible version 📚.