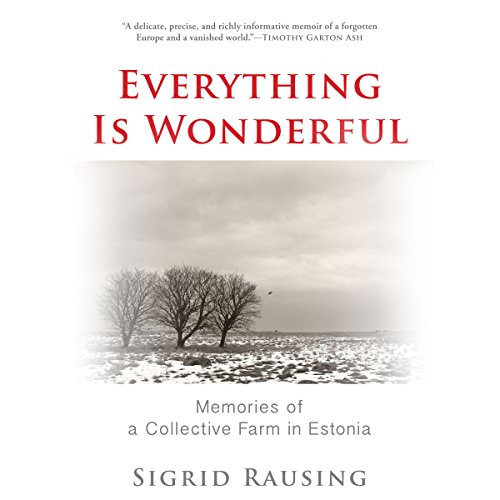 In 1993-94 Sigrid Rausing completed her anthropological fieldwork on the peninsula of Noarootsi, a former Soviet border protection zone in Estonia. Abandoned watchtowers dotted the coastline, and the huge fields of the Lenin collective farm were lying fallow, waiting for claims from former owners, fleeing war and Soviet and Nazi occupation. Rausing’s conversations with the local people touched on many subjects: the economic privations of post-Soviet existence, the bewildering influx of western products, and the Swedish background of many of them. In Everything Is Wonderful Rausing reflects on history, political repression, and the story of the minority Swedes in the area. She lived and worked amongst the villagers, witnessing their transition from repression to freedom, and from Soviet neglect to post-Soviet austerity.

What listeners say about Everything Is Wonderful

Thank god there are happier days for Estonians now. Made me want to travel there. The google images of the country are enchanting. And thank god there is one country, as tiny as it is, who is defending free speech by refusing to submit to the moral blackmail of antisemitism. However, idiology aside, I bought the audible version, read by the author, and oh my gosh is her voice so perfect in this tale. Her accent is Swedish/English, and I frequently use it to fall asleep with as it is so soothing to listen to her describe the experience. The book also made me want to read "Back on the Map: Adventures in Newly Independent Estonia", but there ain't a Kindle edition, Amazon, I hope you are listening... As I am writing this review on one. Kindle is all you need traveling if you like to travel lite. A Kindle and a bluetooth keyboard, and you are set. But back to the book, I would recommend it to anyone. I loved it and will read and listen to it often I think, as one of my favorites. ~~Thanks

The Swedish author lived a year in Estonia to study transition to independence after collapse of USSR back in 1993. It was part of her work towards an advanced degree in social anthropology and she lived among towns people whose collective farm had closed. She was about 31 years old.

This seems a sentimental trip down a very distant memory lane. I found it long and morose but I suspect it is not primarily intended for me but is the authors own historical marker. In that capacity it does well. However, to this listener there was way to much Deep Thinking going on. For instance during her stay in Estonia she decided to use the same poor quality washing soap as the locals she studies. That's easy. But not so fast! She chose to use it "for my own complicated existential reasons." This sort of thing takes some getting used to. I never did get used to it.

The author recounts a restaurant meal where the waitress seems to deliberately bring the wrong food. Three times! She recounts this episode with a detached sense of disinterested fatalism and without any thought or much comment except it was inconvenient to her and her friend. Simply one more feather in the personal gloom tote bag. But how on earth could this bizarre and counter productive behaviour happen given the economic circumstances? Speaking of complicated existential considerations to think about this one takes the cake!